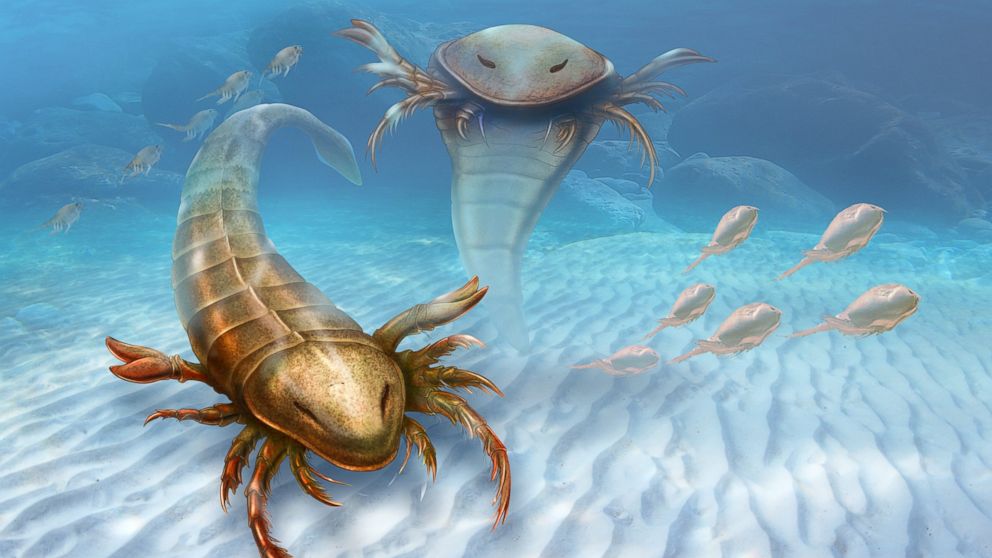 Eurypterids, often informally referred to as sea scorpions, are a group of arthropods that form the order Eurypterida. The earliest known eurypterids date to the Darriwilian stage of the Ordovician period 467.3 million years ago, though the group is likely to have first appeared either during the Early Ordovician or Late Cambrian period. The Eurypterida is the most diverse Paleozoic chelicerate order in terms of species, containing approximately 250 species. Following their appearance during the Ordovician, eurypterids would become major components of marine faunas during the Silurian, from which the majority of eurypterid species have been described. The Silurian genus Eurypterus accounts for more than 90% of all known eurypterid specimens. Though the group continued to diversify during the subsequent Devonian period, the eurypterids were heavily affected by the Late Devonian extinction event and would decline in numbers and diversity until they became extinct during the Permian–Triassic extinction event (or sometime shortly before) 251.9 million years ago.

Although popularly called "sea scorpions", only the earliest eurypterids were marine, with many later forms living in brackish or fresh water, and they were not true scorpions. Some studies suggest that a dual respiratory system was present, which would have allowed for short periods of time in terrestrial environments. The name Eurypterida comes from the Ancient Greek words εὐρύς (eurús), meaning "broad" or "wide", and πτερόν (pteron), meaning "wing", referring to the pair of wide swimming appendages present in many members of the group.

The eurypterids include the largest known arthopods to have ever lived. The largest, Jaekelopterus, reached 2.5 meters (8.2 ft) in length. Eurypterids were not uniformly large and most species were less than 20 centimeters (7.9 in) long; the smallest eurypterids, Alkenopterus and Eocarcinosoma, were only 3 centimeters (1.2 in) long. Eurypterid fossils have been recovered from every continent, though a vast majority of fossils are from fossil sites in North America and Europe due to the group primarily having lived in the waters around and within the ancient supercontinent of Euramerica. Only a handful of eurypterid groups spread beyond the confines of Euramerica and a few genera, such as Adelophthalmus and Pterygotus, achieved a cosmopolitan distribution with fossils being found worldwide.

Like all other arthropods, eurypterids possessed segmented bodies and jointed appendages (limbs) covered in a cuticle composed of proteins and chitin. As in other chelicerates, the body was divided into two tagmata (sections); the frontal prosoma (head) and posterior opisthosoma (abdomen). The prosoma was covered by a carapace (sometimes referred to as the "prosomal shield") on which the compound eyes and ocelli (simple eye-like sensory organs) were located.

Eurypterids were highly variable in size, depending on factors such as lifestyle, living environment and taxonomic affinity. Sizes around 100 centimeters (3.3 ft) are common in most eurypterid groups. The smallest eurypterids, Alkenopterus burglahrensis and Eocarcinosoma batrachophthalmus, measured just 3 centimeters (1.2 in) in length.

The largest eurypterid, and the largest known arthropod to have ever lived, is Jaekelopterus rhenaniae. A chelicera from the Emsian Klerf Formation of Willwerath, Germany measured 36.4 centimeters (14.3 in) in length, but is missing a quarter of its length, suggesting that the full chelicera would have been 45.5 centimeters (17.9 in) long. If the proportions between body length and chelicerae match those of its closest relatives, where the ratio between claw size and body length is relatively consistent, the specimen of Jaekelopterus that possessed the chelicera in question would have measured between 233 and 259 centimeters (7.64 and 8.50 ft), average 2.5 meters (8.2 ft), in length. With the chelicerae extended, another meter (3.28 ft) would be added to this length. This estimate exceeds the maximum body size of all other known giant arthropods by almost half a meter (1.64 ft) even if the extended chelicerae are not included.

The family of Jaekelopterus, the Pterygotidae, is noted for several unusually large species. Both Acutiramus, the largest species A. bohemicus measuring 2.1 meters (6.9 ft), and Pterygotus, the largest species P. grandidentatusmeasuring 1.75 meters (5.7 ft), were gigantic. Several different contributing factors to the large size of the pterygotids have been suggested, including courtship behaviour, predation and competition over environmental resources.

Giant eurypterids were not limited to the Pterygotidae family. An isolated 12.7 centimeters (5.0 in) long fossil metastoma of the carcinosomatoid eurypterid Carcinosoma punctatum indicates that the animal would have reached a length of 2.2 meters (7.2 ft) in life, rivalling the pterygotids in size. Another giant was Pentecopterus decorahensis, a primitive carcinosomatoid, which is estimated to have reached lengths of 1.7 meters (5.6 ft).

The two eurypterid suborders, Eurypterina and Stylonurina, are primarily separated by the morphology of their final pair of appendages. In the Stylonurina, this appendage takes the form of a long and slender walking leg while in the Eurypterina, the leg is modified and broadened into a swimming paddle. The legs, other than the swimming paddle, of many eurypterines were far too small to do much more than allow them to crawl across the sea floor. In contrast, a number of Stylonurines had elongated and powerful legs that might even have allowed them to walk even on land (similar to modern crabs).

Some researchers have suggested that eurypterids may have been adapted to an amphibious lifestyle, using the full gill tract structure as gills and the invaginations within it as pseudotrachae, but this mode of life may not have been physiologically possible since water pressure would have forced water into the invaginations (leading to asphyxiation). Furthermore, most eurypterids would have been aquatic their entire lives and regardless of how much time was spent on land, organs for respiration in underwater environments must have been present. True gills, expected to have been located within the branchial chamber within the blatfüssen, remain unknown in eurypterids.

Like all arthropods, eurypterids matured and grew through static developmental stages referred to as instars. These instars were punctuated by periods during which eurypterids went through ecdysis (molting of the cuticle) after which they underwent rapid and immediate growth. Some arthropods, such as insects and many crustaceans, undergo extreme changes over the course of maturing. Chelicerates, including eurypterids, are in general considered to be direct developers, undergoing no extreme changes after hatching (though extra body segments and extra limbs may be gained over the course of ontogeny in some lineages, such as xiphosurans and sea spiders). Whether eurypterids were true direct developers (with hatchlings more or less being identical to adults) or hemianamorphic direct developers (with extra segments and limbs potentially being added during ontogeny) has been controversial in the past.

Until 1882 no eurypterids were known from before the Silurian. Discoveries throughout the twentieth century and modern times have expanded the knowledge of early eurypterids from the Ordovician period. The earliest eurypterids known today, the megalograptid Pentecopterus, date from the Darriwilian stage of the Middle Ordovician, 467.3 million years ago. There are also reports of even earlier fossil eurypterids in deposits of Late Tremadocian (Early Ordovician) age in Morocco, but these have yet to be thoroughly studied.

Eurypterids were most diverse and abundant between the Middle Silurian and the Early Devonian, with an absolute peak in diversity during the Pridoli epoch, 423 to 419.2 million years ago, of the very latest Silurian. This peak in diversity has been recognized since the early twentieth century; of the approximately 150 species of eurypterids known in 1916, more than half were from the Silurian and a third were from the Late Silurian alone.

Though the eurypterids continued to be abundant and diversify during the Early Devonian (for instance leading to the evolution of the pterygotid Jaekelopterus, the largest of all arthropods), the group was one of many heavily affected by the Late Devonian extinction. The extinction event, only known to affect marine life (particularly trilobites, brachiopods and reef-building organisms) effectively crippled the abundance and diversity previously seen within the eurypterids.

Only three eurypterid families–Adelophthalmidae, Hibbertopteridae and Mycteroptidae (whose fossil record at this time only covers the Late Carboniferous)–survived the extinction event in its entirety. All of these were compromised entirely of freshwater animals, rendering the eurypterids extinct in marine environments. With marine eurypterid predators gone, sarcopterygian fish, such as the rhizodonts, were the new apex predators in marine environments. The sole surviving eurypterine family, Adelophthalmidae, was represented only by a single genus, Adelophthalmus. Both the hibbertopterids and Adelophthalmus would survive into the Permian.