The Permian Period was the final period of the Paleozoic Era. Lasting from 299 million to 251 million years ago, it followed the Carboniferous Period and preceded the Triassic Period. By the early Permian, the two great continents of the Paleozoic, Gondwana and Euramerica, had collided to form the supercontinent Pangaea. Pangaea was shaped like a thickened letter “C.” The top curve of the “C” consisted of landmasses that would later become modern Europe and Asia. North and South America formed the curved back of the “C” with Africa inside the curve. India, Australia and Antarctica made up the low curve. Inside the “C” was the Tethys Ocean, and most of the rest of Earth was the Panthalassic Ocean. Because Pangaea was so immense, the interior portions of the continent had a much cooler, drier climate than had existed in the Carboniferous. 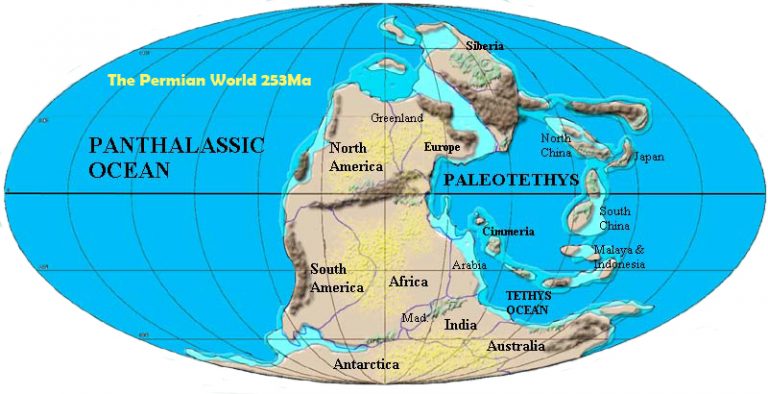 Little is known about the huge Panthalassic Ocean, as there is little exposed fossil evidence available. Fossils of the shallower coastal waters around the Pangaea continental shelf indicate that reefs were large and diverse ecosystems with numerous sponge and coral species. Ammonites, similar to the modern nautilus, were common, as were brachiopods. The lobe-finned and spiny fishes that gave rise to the amphibians of the Carboniferous were being replaced by true bony fish. Sharks and rays continued in abundance.

On land, the giant swamp forests of the Carboniferous began to dry out. The mossy plants that depended on spores for reproduction were being replaced by the first seed-bearing plants, the gymnosperms. Gymnosperms are vascular plants, able to transport water internally. Gymnosperms have exposed seeds that develop on the scales of cones and are fertilized when pollen sifts down and lands directly on the seed. Today’s conifers are gymnosperms, as are the short palm like cycads and the gingko.

Arthropods continued to diversify during the Permian Period to fill the niches opened up by the more variable climate. True bugs, with mouthparts modified for piercing and sucking plant materials, evolved during the Permian. Other new groups included the cicadas and beetles.

Two important groups of animals dominated the Permian landscape: Synapsids and Sauropsids. Synapsids had skulls with a single temporal opening and are thought to be the lineage that eventually led to mammals. Sauropsids had two skull openings and were the ancestors of the reptiles, including dinosaurs and birds.

In the early Permian, it appeared that the Synapsids were to be the dominant group of land animals. The group was highly diversified. The earliest, most primitive Synapsids were the Pelycosaurs, which included an apex predator, a genus known as Dimetrodon. This animal had a lizard-like body and a large bony “sail” fin on its back that was probably used for thermoregulation. Despite its lizard-like appearance, recent discoveries have concluded that Dimetrodon skulls, jaws and teeth are closer to mammal skulls than to reptiles. Another genus of Synapsids, Lystrosaurus, was a small herbivore — about 3 feet long (almost 1 meter) — that looked something like a cross between a lizard and a hippopotamus. It had a flat face with two tusks and the typical reptilian stance with legs angled away from the body.

In the late Permian, Pelycosaurs were succeeded by a new lineage known as Therapsids. These animals were much closer to mammals. Their legs were under their bodies, giving them the more upright stance typical of quadruped mammals. They had more powerful jaws and more tooth differentiation. Fossil skulls show evidence of whiskers, which indicates that some species had fur and were endothermic. The Cynodont (“dog-toothed”) group included species that hunted in organized packs. Cynodonts are considered to be the ancestors of all modern mammals.

At the end of the Permian, the largest Synapsids became extinct, leaving many ecological niches open. The second group of land animals, the Sauropsid group, weathered the Permian Extinction more successfully and rapidly diversified to fill them. The Sauropsid lineage gave rise to the dinosaurs that would dominate the Mesozoic Era.

The Permian Period ended with the greatest mass extinction event in Earth’s history. In a blink of Geologic Time — in as little as 100,000 years — the majority of living species on the planet were wiped out of existence.  Scientists estimate that more than 95 percent of marine species became extinct and more than 70 percent of land animals. Fossil beds in the Italian Alps show that plants were hit just as hard as animal species. Fossils from the late Permian show that huge conifer forests blanketed the region. These strata are followed by early Triassic fossils that show few signs of plants being present but instead are filled with fossil remnants of fungi that probably proliferated on a glut of decaying trees.

Scientists are unclear about what caused the mass extinction. Some point to evidence of catastrophic volcanic activity in Siberia and China (areas in the northern part of the “C” shaped Pangaea). This series of massive eruptions would have initially caused a rapid cooling of global temperatures leading to increased glaciations. This “nuclear winter” would have led to the demise of photosynthetic organisms, the basis of most food chains. Lowered sea levels and volcanic fallout would account for the evidence of much higher levels of carbon dioxide in the oceans, which may have led to the collapse of marine ecosystems. Other scientists point to indications of a massive asteroid impacting the southernmost tip of the “C” in what is now Australia. Whatever the cause, the Great Dying closed the Paleozoic Era.

The 10 Most Important Dinosaurs of Africa

Director Colin Trevorrow has revealed that...

A 20-million-year-old monkey skull that fits...

The Senate approved a proposition to...

When it comes to naming ancient species,...

Researchers Discover An Ancient Rodent That Lived 2.6 Million Years Ago In Eastern Morocco

Researchers from Morocco and Spain...

An international research team led by a...

Why reading about paleontology will make you want to go...