Dinosaurs were reptiles that lived between 230 million and 65 million years ago. If humans weren’t around then, how do we know they really existed?

Let's check out the answer to this and many more facts about these awesome, gigantic (and sometimes small) creatures that once ruled the Earth!

How are dinosaurs studied?

A palaeontologist is a scientist who studies the plants and animals that lived millions of years ago.

They dig up preserved bones, called fossils, to get information about the dinosaurs from long ago. Once they collect a skeleton, they can start to imagine what that dinosaur looked like.

The bones are often made into moulds and cast in fibreglass. They can then be put together and shown in museums.

The largest dinosaur skeleton to be shown in a museum is a type of Titanosaur. You can find it in the American Museum of Natural History in New York city. It’s one of the largest museums in the world and the whole skeleton still couldn’t fit inside one room. Its head and part of its neck poke through a door into the next room!

When did the dinosaurs live? 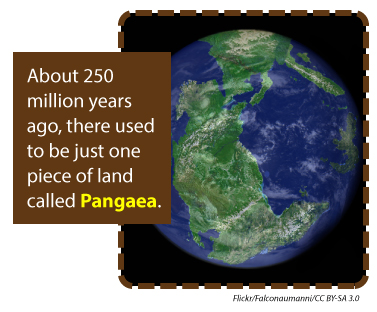 About 250 million years ago, there used to be just one giant piece of land called Pangaea (say “pan-GEE-ah”). At the time, there were no polar ice caps and the inland regions were very dry and hot.

It was at this time that scientists believe that dinosaurs evolved and came to be.

There were big earthquakes and volcanic eruptions over millions of years. This caused Pangaea to break into different continents separated by oceans.

This caused different species of dinosaurs to evolve on different lands.

How many dinosaurs were there?

There are tall dinosaurs like the Sauroposeidon (about as tall as a building with six floors). And there are heavy dinos like the Brachiosaurus (about as heavy as 17 African elephants).

These are just a few of the 700 named species of dinosaur, and more are named every year.

Palaeontologists believe that there are hundreds more types of dinosaurs still to be discovered!

When did the dinosaurs disappear? 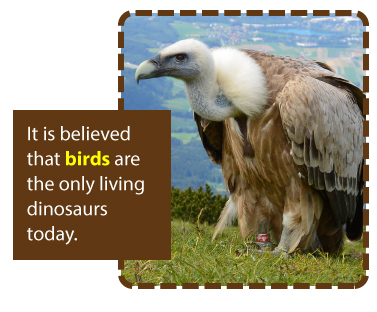 Some scientists believe that a large volcanic eruption got rid of dinos. The volcanic clouds did not let the sun shine through causing the Earth’s temperature to drop.

It then became much too cold for dinosaurs to survive on Earth. Some scientists believe a large meteorite, asteroid or comet hit the Earth. The crash caused massive volcanic eruptions.

It is believed that birds are the only living dinosaurs today.