Mesozoic Era: Age of the Dinosaurs 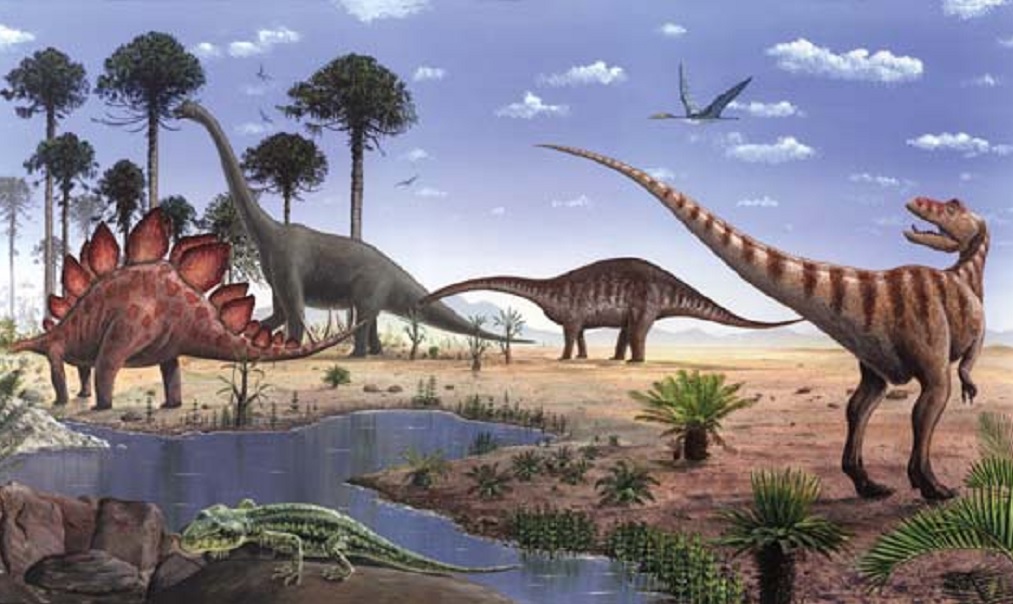 During the Mesozoic, or “Middle Life” Era, life diversified rapidly and giant reptiles, dinosaurs and other monstrous beasts roamed the Earth. The period, which spans from about 252 million years ago to about 66 million years ago, was also known as the age of reptiles or the age of dinosaurs.

The Permian-Triassic boundary, at the start of the Mesozoic, is defined relative to a particular section of sediment in Meishan, China, where a type of extinct, eel-like creature known as a conodont first appeared, according to the International Commission on Stratigraphy.

The end boundary for the Mesozoic Era, the Cretaceous-Paleogene boundary, is defined by a 20-inch (50 centimeters) thick sliver of rock in El Kef, Tunisia, which contains well-preserved fossils and traces of iridium and other elements from the asteroid impact that wiped out the dinosaurs. The Mesozoic Era is divided up into the Triassic, Jurassic, and Cretaceous periods.

The Mesozoic Era began roughly around the time of the end-Permian extinction, which wiped out 96 percent of marine life and 70 percent of all terrestrial species on the planet. Life slowly rebounded, eventually giving way to a flourishing diversity of animals, from massive lizards to monstrous dinosaurs.

Coniferous plants, or those that have cone-bearing seeds, already existed at the beginning of the era, but they became much more abundant during the Mesozoic. Flowering plants emerged during the late Cretaceous Period. The lush plant life during the Mesozoic Era provided plenty of food, allowing the biggest of the dinosaurs, such as the Argentinosaurus, to grow up to 80 tons, according to a 2005 study in the journal Revista del Museo Argentino de Ciencias Naturales.

Earth during the Mesozoic Era was much warmer than today, and the planet had no polar ice caps. During the Triassic Period, Pangaea still formed one massive supercontinent. Without much coastline to moderate the continent’s interior temperature, Pangaea experienced major temperature swings and was covered in large swaths of desert. Yet the region still had a belt of tropical rainforest in regions around the equator, said Brendan Murphy, an earth scientist at St. Francis Xavier University in Antigonish, Canada.

The Mesozoic Era was bookended by two great extinctions, with another smaller extinction occurring at the end of the Triassic Period, Olsen said.

Around 252 million years ago, the end-Permian extinction wiped out most life on Earth over about 60,000 years, according to a February 2014 study in the journal Proceedings of the National Academy of Sciences (PNAS). At the end of the Triassic Period, roughly 201 million years ago, most amphibious creatures and crocodile-like creatures that lived in the tropics were wiped out. About 65 million years ago, a giant asteroid blasted into Earth and formed a giant crater at Chicxulub in the Yucatan Peninsula.

Because the fossil record is incomplete, it’s difficult to say exactly what caused the extinctions, or even how rapidly they occurred. After all, certain species or traces of catastrophic events could be missing in the fossil record simply because the sediments may have disappeared over tens of millions of years, Olsen said.

“Nature is very efficient at getting rid of its corpses,” Olsen told Live Science.

However, there are a few prime suspects in each of the extinctions.

At the end of the Permian, the Siberian Traps underwent massive volcanic eruptions, which most geologists believe caused the world’s biggest extinction. Exactly how, however, is up for debate.

The volcanic eruptions caused a spike in carbon dioxide in the atmosphere, though the 2014 PNAS study suggests that the spike was brief. The eruptions may have increased sea surface temperatures and led to ocean acidification that choked out sea life. And another study published in March 2014 in PNAS proposed that the eruptions released huge troves of the element nickel, which fueled a feeding frenzy by nickel-munching microbes known as Methanosarcina. Those microbes may have belched out huge amounts of methane, superheating the planet.

Most scientists agree that an asteroid impact wiped out the dinosaurs at the end of the Cretaceous Period. The impact would have kicked up so much dust that it blocked the sun, halted photosynthesis, and led to such a huge disruption in the food chain that everything that wasn’t a scavenger or very small died.

But the Deccan Traps, in what is now India, were spewing massive amounts of lava both before and after the asteroid impact, and a few scientists believe these flows either directly caused or accelerated the dinosaurs’ demise.

Volcanism may also be to blame for the end-Triassic extinction. Though volcanism in general leads to global warming, after an initial volcanic eruption, huge amounts of sulfur spew into the air and cause a brief period of global cooling. Such cooling-heating cycles may have occurred hundreds of times over 500,000 years. Similar cold snaps have been tied to huge crop failures in historical times, such as in Iceland in the 1700s, Olsen said.

As a result, animals used to constant, balmy temperatures in the tropics were wiped out, while animals that were insulated with proto-feathers, such as pterosaurs, or that lived at higher latitudes and were already adapted to big temperature variations, did just fine, Olsen said.

“When you have these volcanic winters, where temperatures may have dropped even below freezing in the tropics, it was devastating,” Olsen said.

How The Spinosaurus Was Supposed To Die In Jurassic Park 3

The mighty Spinosaurus just kind of...

A new genus and species of ...

The dinosaur genre has certainly been taken...