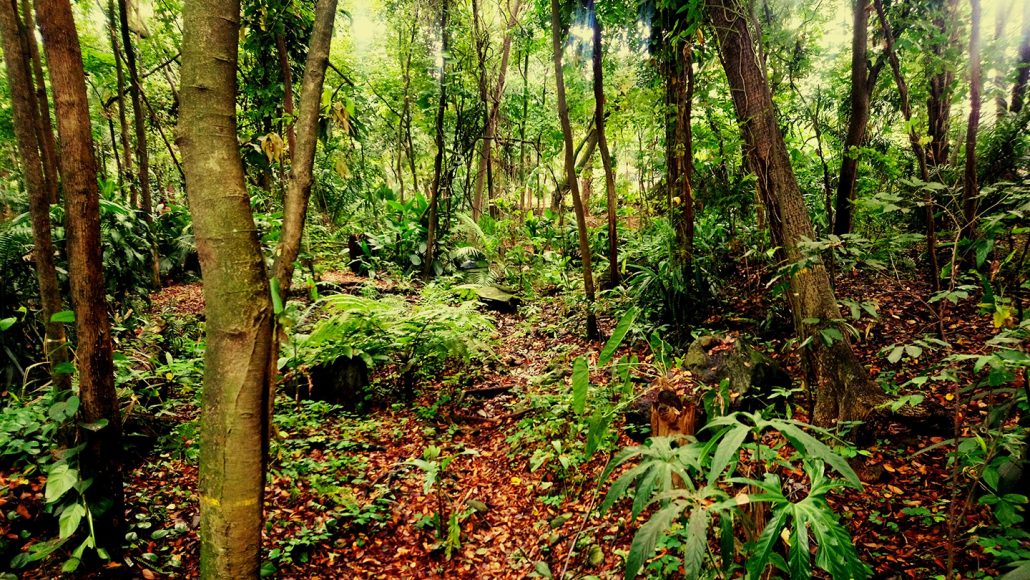 Sunny forests morphed into the dark, dense ones that are typical today.

Some 66 million years ago, a very different type of rainforest thrived in what is now Colombia. Ferns unfurled. Towering conifers reached for the skies. Flowering shrubs bathed in the sunlight that streamed down to them through large gaps in the canopy between those trees. Then an asteroid crashed into Earth. Overnight, everything changed.

The fireball’s impact set off a massive extinction event. It wiped out more than 75 percent of all life on Earth. It also kicked off a massive transformation of the planet’s tropical rainforests. Gone were the sun-dappled, semi-open woodlands. In their place came forests where large swaths of the ground now were covered by dark, dense, lush and moist trees — ones typical of today’s Amazon. Researchers described their new evidence for this forest-morphing April 2 in Science.

They had analyzed tens of thousands of fossils of pollen, spores and leaves. These came from 39 sites across what is now the South American nation of Colombia. All fossils dated from between 70 million and 56 million years ago.

The team then assessed what plants had left these remains. They gave clues to which had been dominant. They also pointed to what insects had been interacting with them. And the evidence was startling. It showed that once the Earth-shaking space rock struck, forest ecosystems abruptly changed.

Right away, plant diversity declined by 45 percent, the researchers now report. It would take 6 million years before the rich diversity of the old forest returned. Yet even then, these rainforests would never be the same.

“A single historical accident changed the ecological and evolutionary trajectory of tropical rainforests,” says Carlos Jaramillo. He’s a scientist at the Smithsonian Tropical Research Institute. It’s in Panama City, Panama. There, he specializes in the study of ancient pollen. What his team’s new data show is “the forests that we have today are really the by-product of what happened 66 million years ago.”

That fireball triggered a cascade of changes

Right before the extinction event, tropical forests hosted a very different mix of species. Roughly half the greenery had been flowering trees and shrubs. The other half were species such as conifers and ferns. After the fireball, the ferns and conifers largely vanished. The flowering trees and shrubs took over. Eventually they would become some 90 percent of the forest’s plant species.

Why is not totally clear.

At the end of the Cretaceous Period, 66 million years ago, that region was hot and humid — similar to what it is today. But that climate alone is not likely what led to the forest’s structure. Huge long-necked, plant-eating dinosaurs had lived there. These sauropods, the largest animals ever to walk the Earth, would have helped maintain open gaps in the forest canopy, Jaramillo explains. This would have let light reach the ground. But when the asteroid hit, these and most other dinosaurs disappeared. Certain plant families did, too.

Then there were changes to the soil. Frequent rains during the warm, wet Cretaceous would have leached nutrients from the soil, washing them away. The poor soils they left behind would have favored trees such as conifers, Jaramillo explains: These trees had “this amazing ability to grow with very little food.” It allowed them to win out over flowering trees and shrubs.

But in the wake of the asteroid impact, ash from widespread fires would have fluttered to the ground. This likely would have seeded the soils with phosphorus, a fertilizer. With more nutrients available, flowering trees and shrubs could rise to dominance, the researchers say. In time, these species evolved to grow skyward in dense communities that now blocked the sun from the forest floor. This thick, closed canopy appeared soon after the impact.

The forest’s overall diversity took much longer to recover. In time, new species emerged to occupy different parts of this changing ecosystem. Insect communities also changed. The researchers found leaf fossils with traces of different interactions between plant-eating insects and plants. Before the asteroid hit, these included specialist creatures. Some drilled careful holes through leaves. Others could strip leaves down to their skeletons.

Other insects and plant-munching groups had been more “generalists.” They could dine on a wide variety of plants. These animals “seemed to squeak through [the extinction event] largely unaffected,” says coauthor Conrad Labandeira. He’s an ecologist who specializes in ancient life. He works at the Smithsonian National Museum of Natural History in Washington, D.C. Some of the old specialists that were more dependent on particular plant types now “got really creamed,” Labandeira says. These included leaf miners, leaf-piercers and leaf-suckers.

A lesson on the length of impacts

The forest transformation described here offers a valuable lesson that could apply to the long-lasting impacts of human activities today, such as deforestation. “Generating new diversity takes geological time,” Jaramillo says. By geological, he means timescales that could last millions of years. The data indicate, he says, that bringing back forests can take far more than just replanting trees.

This is the first comprehensive picture of what happened to tropical forests right after the extinction event, says Elena Stiles. She’s a paleoecologist who works at the University of Washington, in Seattle. She did not take part in the new study. In the past, most analyses of the time right before and after the extinction event come either from North America, or from much farther south, she notes. The tropics were largely overlooked. And there’s a reason. “In the tropics, there is no place where we have the boundary [from before and after the asteroid impact] preserved,” she says. There also are few fossils from this region.

In fact, she says, the new data may help answer a longstanding question about South America’s species richness. “For a long time, people have wondered where all of this diversity comes from,” Stiles notes. Some researchers speculated it was due to the continent’s climate. Or maybe its long isolation from other continents was responsible. “So it’s really interesting,” she says, to now learn that “this mass-extinction event could have been one of the mechanisms that shaped it to [today] be this unique.”

A research study sheds new light upon an...

Jurassic World 3: BioSyn's Plans Mean We All Lose If They Beat InGen

With Dodgson and BioSyn coming back for...

Raptorial Dinosaurs Did Not Hunt in Coordinated Packs, Paleontologists Say

An analysis of the fossilized teeth of...

Millions of years before mammals first...

Is Rexy Going To Be In Jurassic World 2?

Rexy was by far one of the best parts of...

Jurassic Park: 10 Facts From The Books The Movies Leave Out

Jurassic Park is a...

How Are Dinosaurs Named?

New species get identified and named every...

A fan theory suggests an iconic...