If I’d list down all their species then that would be more than a hundred thousand, so diverse was the kingdom of this terrestrial reptile. Since quite enough we have been conjured up by the aura of that one mosquito bite which could bring that vogue extinct race back to the world’s terrene. So what if it actually happens? would we risk it or not i don’t know so avoiding that dispute  and taking you to those ten esteemed dinosaurs out of way so many that people fancy and would like to have in that kind of park.

10. Sinosauropteryx (The Most Colorful Dinosaur)

There have been a number of dinosaurs with feathers but some were not even recognizable. Sinosauropteryx is the first genus of non-avian dinosaur found with the fossilized impressions of feathers, as well as the first non-avian dinosaur where coloration has been determined. It lived in China during the early Cretaceous period and was a close relative of Compsognathus (the smallest dinosaurs ever). The remarkably well-preserved fossils show that Sinosauropteryx was covered with a furry down of very simple feathers — though some contention arose with an alternative interpretation of the filamentous impression as collagen fiber remains. These filaments consisted of a simple two-branched structure, roughly similar to the secondarily primitive feathers of the modern kiwi. Sinosauropteryx is distinguished from other small dinosaurs by several features, including having a skull longer than its upper leg bone (femur) and very short, stout forelimbs, with the arms being only 30% the length of the legs.

Liopleurodon is only on this list which is not scientifically classified as a dinosaur but in popular culture, it is referred to as so because of their co-existence with dinosaurs in the Jurassic era. Liopleurodon fossils have been found mainly in England and France, with one younger species known from Russia. Four strong paddle-like limbs suggest that Liopleurodon was a powerful swimmer. It provides very good acceleration – a desirable trait in an ambush predator by  scanning the water with its nostrils to ascertain the source of certain smells. It’s size was around  34 ft long. In 1999, Liopleurodon was featured in an episode the BBC television series Walking with Dinosaurs. In the programme, Liopleurodon was depicted attacking and devouring the theropod dinosaur, before becoming beached during a typhoon and suffocating under its own weight. The depiction of Liopleurodon leaping onto the land in order to catch land-based prey is entirely speculative.

Ankylosaurus is often considered the archetypal armored dinosaur. Its well-known features are – the heavily-armored body and massive bony tail club – but Ankylosaurus was the largest known member of the family. In comparison with modern land animals the adult Ankylosaurus was very large. Some scientists have estimated a length of 30 ft. The body shape was low-slung and quite wide. Ankylosaurus was quadrupedal, with the hind limbs longer than the forelimbs. Ankylosaurus was herbivorous, with small, leaf-shaped teeth suitable for cropping vegetation. These teeth were smaller, relative to the body size. Bones in the skull and other parts of the body were fused to increase their strength. The most obvious feature of Ankylosaurus is its armor, consisting of massive knobs and plates of bone, known as osteoderms or scutes, embedded in the skin. The plates were aligned in regular horizontal rows down the animal’s neck, back, and hips, with the many smaller nodules protecting the areas between the large plates. The famous tail club of Ankylosaurus was also composed of several large osteoderms, which were fused. It allowed great force to be transmitted to the end of the tail when it was swung. It seems to have been an active defensive weapon, capable of producing enough of a devastating impact to break the bones of an assailant.

It was one of the last dinosaur genera to appear before the great extinction. Bearing a large bony frill and three horns on its large four-legged body, and conjuring similarities with the modern rhinoceros, Triceratops is one of the most recognizable of all dinosaurs. Although it shared the landscape with and was preyed upon by the fearsome Tyrannosaurus, it is unclear whether the two did battle in the manner often depicted in museum displays and popular images. The function of their frills and three distinctive facial horns has long inspired debate. Although traditionally viewed as defensive weapons against predators, the latest theories claim that it is more probable that these features were used in courtship and dominance displays, much like the antlers and horns of modern reindeer, mountain goats, or rhinoceros beetles.

Due to its distinctive tail spikes and plates, Stegosaurus is one of the most recognizable dinosaurs. They lived some 150 to 145 million years ago, in an environment and time dominated by the giants. A large, heavily built, herbivorous quadruped, Stegosaurus had a distinctive and unusual posture, with a heavily rounded back, short forelimbs, head held low to the ground and a stiffened tail held high in the air. Its array of plates and spikes has been the subject of much speculation. The spikes were most likely used for defense, while the plates have also been proposed as a defensive mechanism, as well as having display and thermoregulatory (heat control) functions. Stegosaurus was the largest of all the stegosaurians but still roughly bus-sized. Averaging around 30 ft long and 14 fttall, the quadrupedal Stegosaurus is one of the most easily identifiable dinosaurs, due to the distinctive double row of kite-shaped plates rising vertically along its rounded back and the two pairs of long spikes extending horizontally near the end of its tail. Although a large animal, it was dwarfed by its contemporaries, the giant sauropods. Some form of armor appears to have been necessary, as it coexisted with large predatory dinosaurs.

Archaeopteryx, from the late Jurassic Period, may be the earliest known theropod dinosaur which may have had the capability of powered flight. If Archaeopteryx is defined as an avian, then there are few non-avian avialans. Avialae is the only clade of dinosaurs containing their only living representatives, birds, and the most immediate extinct relatives of birds.  Similar in size and shape to a European Magpie, Archaeopteryx could grow to about 1 metre  in length. Despite its small size, broad wings, and inferred ability to fly or glide, Archaeopteryx has more in common with small theropod dinosaurs than it does with modern birds. In particular, it shares the following features with the deinonychosaurs (dromaeosaurs and troodontids): jaws with sharp teeth, three fingers with claws, a long bony tail, hyperextensible second toes (“killing claw”), feathers (which also suggest homeothermy), and various skeletal features. The features above make Archaeopteryx a clear candidate for a transitional fossil between dinosaurs and birds. Thus, Archaeopteryx also plays an important role not only in the study of the origin of birds but in the study of dinosaurs.

The animal was the size of a turkey and could weigh as less as 0.26g and lived around 150 million years ago in what is now Europe. It is the smallest known dinosaur. Compsognathus is one of the few dinosaurs for which the diet is known with certainty: the remains of small, agile lizards were found preserved in the bellies of  specimens. Although not recognized as such at the time of its discovery, Compsognathus is the first dinosaur known from a reasonably complete skeleton and the smallest and the closest supposed relative of the early bird Archaeopteryx. Thus, the genus is one of the few dinosaur genera to be well known outside of paleontological circles.

A. fragillimus is the largest and heaviest dinosaur ever discovered. A. fragillimus may have been the longest known vertebrate at 40–60 meters (131–196 ft) in length, and may have had a mass of up to 122 metric tons. Whatever evolutionary pressure caused large size was present from the early origins of the group. Carpenter cited several studies of giant mammalian herbivores, such as elephants and rhinoceros, which showed that larger size in plant-eating animals leads to greater efficiency in digesting food. Since larger animals have longer digestive systems, food is kept in digestion for significantly longer periods of time, allowing large animals to survive on lower-quality food sources. This is especially true of animals with a large number of ‘fermentation chambers’ along the intestine which allow microbes to accumulate and ferment plant material, aiding digestion.

Velociraptor (commonly shortened to ‘raptor’) is one of the dinosaur genera most familiar to the general public that existed approximately 75 to 71 million years ago. Velociraptor was a mid-sized dromaeosaurid, with adults measuring up to 6.8 ft long, 1.6 ft high at the hip, and weighing up to 15 kg. The skull, which grew up to 9.8 in long, was uniquely up-curved, concave on the upper surface and convex on the lower. The jaws were lined with 26–28 widely spaced teeth on each side, each more strongly serrated on the back edge than the front—possibly an adaptation that improved its ability to catch and hold fast-moving prey. It was a bipedal, feathered carnivore with a long, stiffened tail and an enlarged sickle-shaped claw on each hindfoot, which is thought to have been used to kill its prey. Velociraptor can be distinguished from other dromaeosaurids by its long and low skull, with an upturned snout. 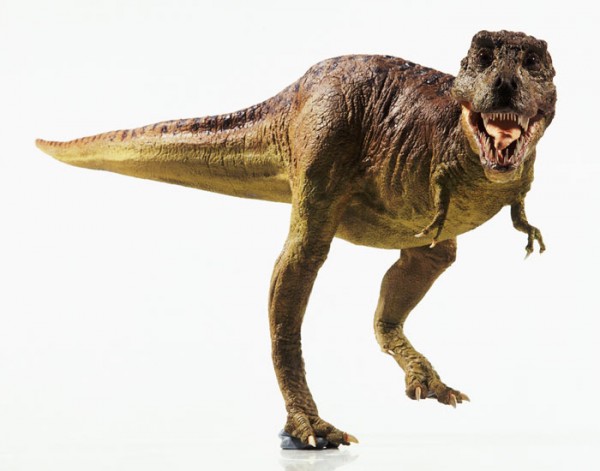 T-Rex, yes we can’t forget the dinosaur king for obvious reasons. It was among the last non-avian dinosaurs to exist. It lived throughout what is now western North America, 7 to 65.5 million years ago. Like other tyrannosaurids, Tyrannosaurus was a bipedal carnivore with a massive skull balanced by a long, heavy tail. Relative to the large and powerful hindlimbs, Tyrannosaurus forelimbs were small, though unusually powerful for their size, and bore two clawed digits. Although other theropods (a dinosaur subclassification) rivaled or exceeded Tyrannosaurus rex in size, it was the largest known tyrannosaurid and one of the largest known land predators, measuring up to 42 ft in length, up to 13 ft tall at the hips, and up to 6.8 metric tons (7.5 short tons) in weight. By far the largest carnivore in its environment, Tyrannosaurus rex was an apex predator.

A rare fossil believed to be from South...

Jurassic World 3: What Dominion Needs To Do To End The Trilogy

The Real Science of Bringing Back the Dinosaurs

Jack Horner, a paleontologist who inspired a...

‘Jurassic World 2’ Will Be the Franchise’s Scariest

We still don’t know very much about next...

Paleontologists have identified a new genus...

The exquisite preservation of a new, partial...