HOW MUCH DO YOU REALLY KNOW ABOUT TYRANNOSAURUS REX?

Tyrannosaurus rex is by far the most popular dinosaur, spawning a huge number of books, movies, TV shows, and even video games. What’s truly amazing, though, is how much about this carnivore that was once assumed as fact has lately been called into question, and how much is still being discovered. On the following slides, you’ll discover 10 fascinating facts Tyrannosaurus rex facts.

Most people reflexively assume that the North American Tyrannosaurus rex–at 40 feet from head to tail and eight  tons–was the biggest carnivorous dinosaur that ever lived, The fact is, though, that T. rex was outclassed by not one, but two, dinosaurs–the South American Giganotosaurus, which weighed about nine tons, and the northern African Spinosaurus, which tipped the scales at 10 tons. Sadly, these three theropods never had the chance to square off in combat, since they lived in different times and places.

One feature of Tyrannosaurus rex that everyone likes to make fun of is its arms, which seem disproportionately tiny compared to the rest of its massive body. The fact is, thought, that T. rex’s arms were over three feet long, and may have been capable of bench-pressing 400 pounds each. In any event, T. rex didn’t have the smallest arm-to-body ratio of any carnivorous dinosaur; that honor belongs to the truly comical-looking Carnotaurus, the arms of which looked like tiny nubs. 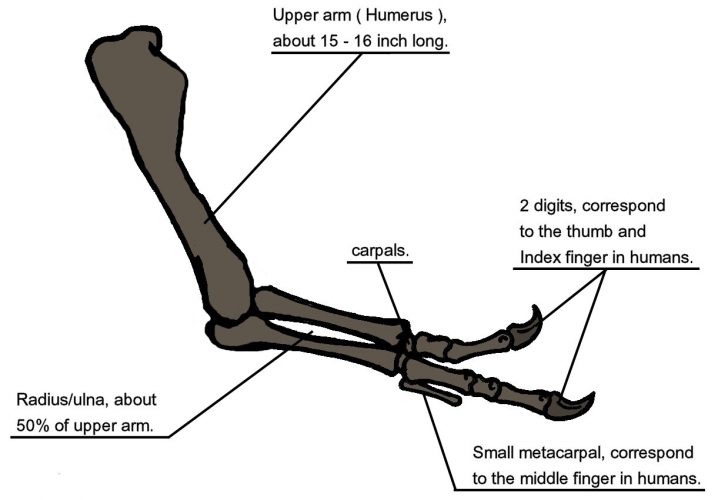 Granted, most of the dinosaurs of the Mesozoic Era didn’t brush their teeth, and very few of them flossed. Some experts think the shards of rotten, bacteria-infested meat lodged in its numerous, closely packed teeth gave Tyrannosaurus rex a “septic bite,” which infected (and eventually killed) wounded prey. The problem is, this process likely would have taken days or weeks, by which time some other lucky meat-eating dinosaur would have reaped the rewards!

FEMALE TYRANNOSAURUS REX WERE BIGGER THAN THE MALES

We don’t yet know for sure, but there’s good reason to believe (based on the size of existing fossils and the shapes of their hips) that female T. rex outweighed their male counterparts by a few thousand pounds, a trait known as sexual dimorphism. Why? The most likely reason is that females of the species had to lay clutches of T. rex-sized eggs, and thus were blessed by evolution with bigger hips, or perhaps females were simply more accomplished hunters than males (as is the case with modern lions).

It’s difficult to infer a dinosaur’s life span from its fossil remains, but based on an analysis of existing specimens, paleontologists speculate that Tyrannosaurus rex may have lived as long as 30 years–and since this dinosaur was on the top of its local food chain, it would most likely have been felled by old age, disease, or hunger rather than attacks by its fellow theropods. (By the way, some of the 50-ton titanosaurs that lived alongside T. rex may have had life spans of more than 100 years!)

TYRANNOSAURUS REX WAS BOTH A HUNTER AND A SCAVENGER

For years, paleontologists argued about whether T. rex was a savage killer or an opportunistic scavenger–that is, did it actively hunt its food, or did it tuck into the carcasses of dinosaurs that had already been felled by old age or disease? Today, this controversy seems rather quaint, as there’s no reason T. rex couldn’t have pursued both behaviors at the same time–as would any respectable carnivore that wanted to avoid starvation.

T. REX HATCHLINGS MAY HAVE BEEN COVERED IN FEATHERS

We all know that dinosaurs evolved into birds, and that some carnivorous dinosaurs (especially raptors) were covered in feathers. Hence, some paleontologists believe that all tyrannosaurs, including T. rex, must have been covered in feathers at some point during their life cycles, most likely when they first hatched out of their eggs, a conclusion supported by the discovery of feathered Asian tyrannosaurs like Dilong and the almost T. rex-sized Yutyrannus.

You thought Mayweather vs. Pacquiao was a compelling fight? Just imagine an eight-ton Tyrannosaurus rex taking on a five-ton Triceratops, a not-inconceivable proposition since both of these dinosaurs lived in late Cretaceous North America. Granted, the average T. rex would have preferred to tackle a sick, juvenile or newly hatched Triceratops, but if it was hungry enough, all bets were off.

Back in 1996, a team of Stanford University scientists determined that T. rex chomped on its prey with a force of anywhere from 1,500 to 3,000 pounds per square inch, comparable to that of a modern alligator, and more recent studies put that figure in the 5,000-pound range. (For purposes of comparison, the average adult human can bite with a force of about 175 pounds). T. rex’s powerful jaws may even have been capable of shearing off a ceratopsian‘s horns!

When the famous paleontologist Edward Drinker Cope excavated the first T. rex fossil, in 1892, he briefly considered naming his find Manospondylus gigax–Greek for “giant thin vertebrae.” After further impressive fossil finds, it was up to the then-president of the American Museum of Natural History, Henry Fairfield Osborn, to erect the immortal name Tyrannosaurus rex, the “tyrant lizard king.”

A 425-million-year-old fossil millipede from...

Scientists have published their findings on...

Beetle in Amber Offers Insight Into Drift of Ancient Continents

A 99 million-year-old beetle trapped in...

Filling in the links of the evolutionary...