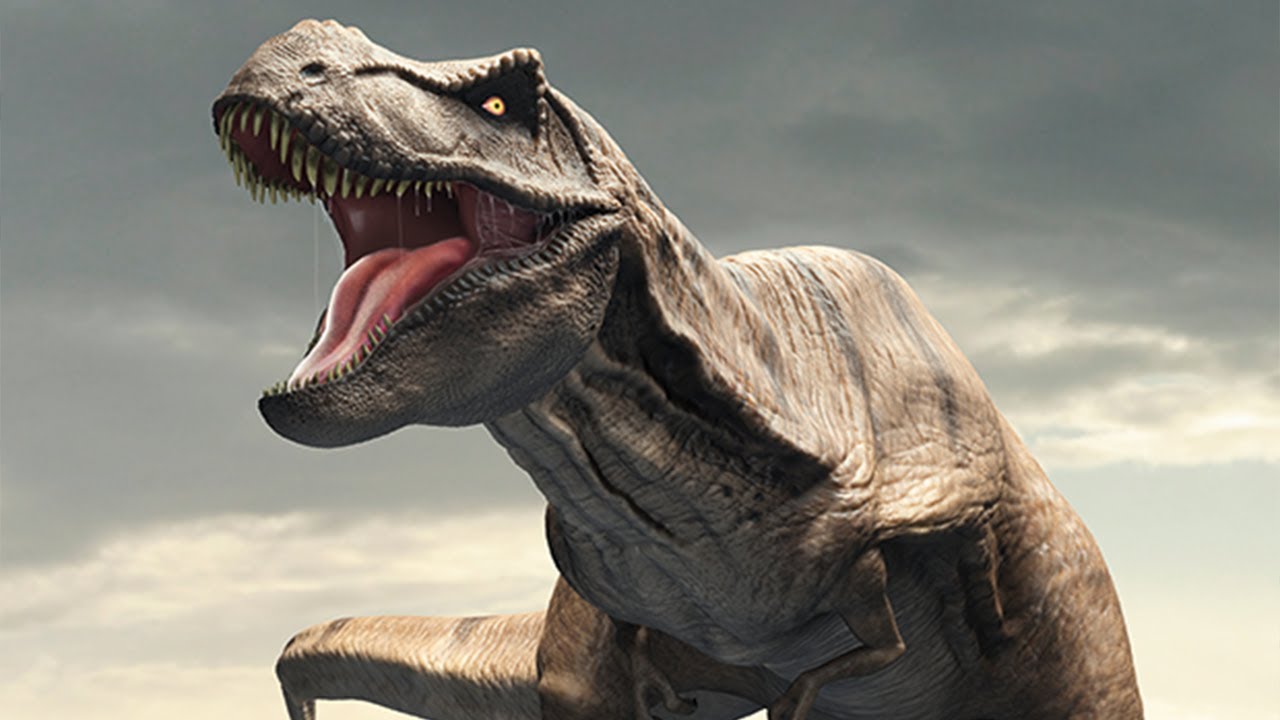 Tyrannosaurus (meaning “tyrant lizard”, from the Ancient Greek tyrannos (τύραννος), “tyrant”, and sauros (σαῦρος), “lizard”) is a genus of coelurosaurian theropod dinosaur. The species Tyrannosaurus rex (rex meaning “king” in Latin), is one of the most well-represented of the large theropods. Tyrannosaurus lived throughout what is now western North America, on what was then an island continent known as Laramidia. Tyrannosaurus had a much wider range than other tyrannosaurids. Fossils are found in a variety of rock formations dating to the Maastrichtian age of the upper Cretaceous Period, 68 to 66 million years ago. It was the last known member of the tyrannosaurids, and among the last non-avian dinosaurs to exist before the Cretaceous–Paleogene extinction.

Tyrannosaurus rex has been known to science since the end of the nineteenth century,‭ ‬and to this day remains arguably the most popular dinosaur the world over.‭ ‬This is evidenced by its almost mandatory inclusion in books,‭ ‬TV shows,‭ ‬games and websites that are about dinosaurs in general.‭ ‬Tyrannosaurus also probably has more toys and merchandising relating to it than any other dinosaur.

Like other tyrannosaurids, Tyrannosaurus was a bipedal carnivore with a massive skull balanced by a long, heavy tail. Relative to its large and powerful hind limbs, Tyrannosaurus fore limbs were short but unusually powerful for their size and had two clawed digits. The most complete specimen measures up to 12.3 m (40 ft) in length, up to 3.66 meters (12 ft) tall at the hips, and according to most modern estimates 8.4 metric tons (9.3 short tons) to 18.5 metric tons (20.4 short tons) in weight. Although other theropods rivaled or exceeded Tyrannosaurus rex in size, it is still among the largest known land predators and is estimated to have exerted the largest bite force among all terrestrial animals. By far the largest carnivore in its environment, Tyrannosaurus rex was most likely an apex predator, preying upon hadrosaurs, armoured herbivores like ceratopsians and ankylosaurs, and possibly sauropods. Some experts, however, have suggested the dinosaur was primarily a scavenger. The question of whether Tyrannosaurus was an apex predator or a pure scavenger was among the longest ongoing debates in paleontology. It is accepted now that Tyrannosaurus rex acted as a predator, and opportunistically scavenged as modern mammalian and avian predators do.

T. rex‘s serrated, conical teeth were most likely used to pierce and grip flesh, which it then ripped away with its brawny neck muscles. Its two-fingered forearms could probably seize prey, but they were too short to reach its mouth.

Scientists believe this powerful predator could eat up to 500 pounds (230 kilograms) of meat in one bite. Fossils of T. rexprey, including Triceratops and Edmontosaurus, suggest T. rex crushed and broke bones as it ate, and broken bones have been found in its dung.

A slower than expected speed does not mean that Tyrannosaurus was a scavenger however.‭ ‬You have to remember that predators need to be only fast enough to catch their prey.‭

Full size model in Poland, depicting Tyrannosaurus with both feathers and scales, and with lipped jaws.

While there is no direct evidence for Tyrannosaurus rex having had feathers, many scientists now consider it likely that T. rexhad feathers on at least parts of its body, due to their presence in related species. Mark Norell of the American Museum of Natural History summarized the balance of evidence by stating that: “we have as much evidence that T. rex was feathered, at least during some stage of its life, as we do that australopithecines like Lucy had hair.”

T. rex fossils are found in a variety of rock formations dating to the Maastrichtian age of the upper Cretaceous period, which lasted from 67 million to 65 million years ago, toward the end of the Mesozoic Era. It was among the last of the non-avian dinosaurs to exist prior to the Cretaceous-Paleogene extinction event, which wiped out the dinosaurs.

More mobile than many other land-based dinosaurs, T. rex roamed throughout what is now western North America, at the time an island continent identified as Laramidia. More than 50 skeletons of T. rex have been unearthed, according to National Geographic. Some of these remains are nearly complete skeletons, and at least one skeleton included soft tissue and proteins.

Tyrannosaurus and other animals of the Hell Creek Formation

Tyrannosaurus lived during what is referred to as the Lancian faunal stage (Maastrichtian age) at the end of the Late Cretaceous. Tyrannosaurus ranged from Canada in the north to at least Texas and New Mexico in the south of Laramidia. During this time Triceratops was the major herbivore in the northern portion of its range, while the titanosaurian sauropod Alamosaurus “dominated” its southern range. Tyrannosaurus remains have been discovered in different ecosystems, including inland and coastal subtropical, and semi-arid plains.

Several notable Tyrannosaurus remains have been found in the Hell Creek Formation. During the Maastrichtian this area was subtropical, with a warm and humid climate. The flora consisted mostly of angiosperms, but also included trees like dawn redwood (Metasequoia) and Araucaria. Tyrannosaurus shared this ecosystem with Triceratops, related ceratopsians Nedoceratops, Tatankaceratops and Torosaurus, the hadrosaurid Edmontosaurus annectens and possibly a species of Parasaurolophus, the armored dinosaurs Denversaurus, Edmontonia and Ankylosaurus, the dome headed dinosaurs Pachycephalosaurus, Stygimoloch, Sphaerotholus, and Dracorex, the hypsilophodont Thescelosaurus, and the theropods Ornithomimus, Struthiomimus, Orcomimus, Acheroraptor, Dakotaraptor, Richardoestesia, Paronychodon, Pectinodon and Troodon.

Fossils From Cat With ‘Steak Knife’ Fangs, Found in Yukon

The Remarkable Backstory of a 475-Million-Year-Old Fossil

What toddler doesn’t love pretending to be a...

Jurassic Park: Why Frog DNA Was Used To Create The Dinosaurs

While its legacy can (and will) be talked...

5 Reasons Why 2018 Was a Big Year for Paleontology

A lot happened in the world of paleontology...