For nearly 300 million years, these ancient mariners dotted our ocean floors—surviving, thriving, and fossilizing beneath the waves.

Every single continent has yielded trilobite remains. The biggest species (Isotelus rex) was some 28 inches long, while the smallest measured less than a millimeter from end to end. Some sported defensive spines, while others had smooth, rounded shells. And whereas certain trilobites came with disproportionately large eyes, many deep-sea species were blind.

Their debut roughly coincided with the dawn of the Cambrian period. During this game-changing chapter in Earth’s history, multi-celled organisms went through an apparent explosion in diversity, or at least an explosion in life forms that leave fossils. New creatures—including a barrage of mollusks and arthropods—seem to have evolved at an unprecedented rate.

The Cambrian also saw trilobites become the most common and diverse animals on the planet. However, trilobites began to decline when the period ended some 500 million years ago. Though the invertebrates stuck around for another 240 million years, they’d never again be so successful.

3. MANY WOULD CURL UP INTO LITTLE BALLS FOR PROTECTION. 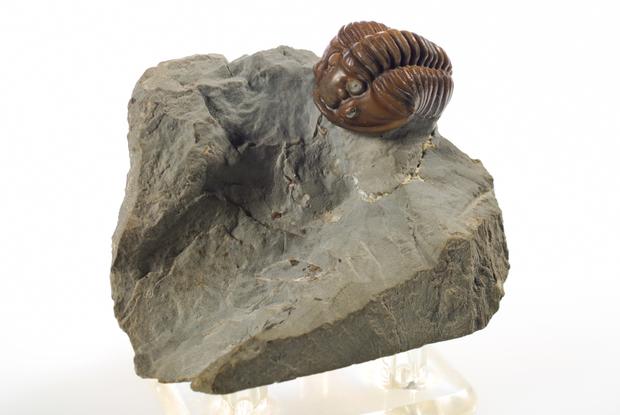 When danger struck, some trilobites could ball themselves up like underwater pill bugs, with their rear end flexed under their head. Specimens dating as far back as the late Cambrian have been found in this defensive position.

4. AT FIRST, SCIENTISTS DIDN’T KNOW WHAT TO MAKE OF THEM.

In a 1679 letter, Welsh linguist and naturalist Edward Lhuyd misidentified one as “the sceleton [sic] of some Flat-fish.” Bishop Charles Lyttleton came a little closer to the mark in 1750 when he wrote London’s Royal Society about a “petrified Ins[e]ct” that he’d dug up a year before. While trilobites were, in fact, arthropods, the creatures appear to have been more closely akin to crustaceans and/or chelicerates (i.e. arachnids and horseshoe crabs) than insects.

Over the course of its life, a trilobite outgrew many shells. During the molting process, these discarded husks would often get preserved for posterity. One trilobite could therefore leave behind several trilobite-shaped fossils. Specimens that represent the actual creature—as opposed to its shuffled-off shell—are comparatively rare.

6. THREE STATES HAVE MADE A TRILOBITE THEIR OFFICIAL FOSSIL.

7. TRILOBITES GATHERED FOOD IN A VARIETY OF WAYS.

Generally speaking, early trilobites seem to have hunted down aquatic worms and eaten them alive. It’s been theorized that a few other species evolved to eat plankton or algae—with some making use of a filter-feeding mechanism.

8. TRILOBITES WERE WIPED OUT BY THE BIGGEST EXTINCTION IN HISTORY.

Some call it the “Great Dying”—250 million years ago, 90 percent of all species on earth suddenly perished. Possible causes include everything from increased volcanic activity to exploding supernovas. Regardless, the event—also known as the Permian Extinction —killed off a number of insects, sharks, armored fish, mammal-like creatures, and countless other organisms. Trilobites, however, are by far the most famous lineage to have met their end this way.

9. NATIVE AMERICANS USED THEM AS AMULETS.

Long before Europeans first set foot on the continent, the Pahvant Ute people, from what is now called Utah, gathered Cambrian trilobites. Believing that the fossils harbored special powers, the natives carried them around as protective charms. These odd, petrified critters were given the name “Timpe-Konitza-Pachuee,” or “little water bug living in a house of stone.”

10. ONE CHINESE TRILOBITE WAS NAMED AFTER A STAR WARS CHARACTER.

Around the start of the last decade, paleontologist Samuel Turvey happened upon several new species of trilobites while exploring in China. He gave one new invertebrate the genus name Han, which it shares with China’s biggest ethnic group. When the time came to pick species names, Turvey couldn’t resist bolstering his Star Wars cred, and named one particular trilobite Han solo. (It helped that Han solo was the only species in the genus.)

All photos courtesy of iStock unless otherwise noted.