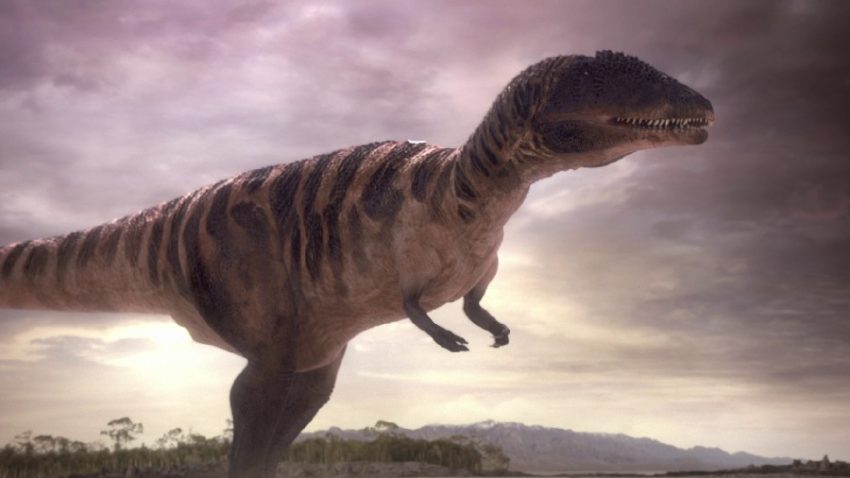 Carcharodontosaurus is a genus of carnivorous carcharodontosaurid dinosaurs that existed between 100 and 94 million years ago, during the Cenomanian stages of the mid-Cretaceous Period. It is currently known to include two species, C.saharicusand C.iguidensis, which were among the larger theropods, as large as or slightly bigger than Tyrannosaurus and possibly slightly larger than Giganotosaurus, but not quite as large as Spinosaurus.

Carcharodontosaurus includes some of the longest and heaviest known carnivorous dinosaurs, with various scientists proposing length estimates for the species C. saharicus ranging between 12 and 13.3 m (39 and 44 ft) and weight estimates between 6.2 and 15.1 metric tons.

Carcharodontosaurus were carnivores, with enormous jaws and long, serrated teeth up to eight inches long. A skull length of about 1.6 meters (5.2 ft) has been restored for C. saharicus, and the skull of C. iguidensis is reported to have been about the same size. Currently, the largest known theropod skull belongs to another huge carcharodontosaurid dinosaur, the closely related Giganotosaurus (with skull length estimates up to 1.95 m) (6.4 ft). Gregory S. Paul estimates Carcharodontosaurus iguidensis at 10 m (33 ft) and 4 t (4.4 short tons).

In 2001, Hans C. E. Larsson published a description of the inner ear and endocranium of Carcharodontosaurus saharicus. Starting from the portion of the brain closest to the tip of the animal’s snout is the forebrain, which is followed by the midbrain. The midbrain is angled downwards at a 45 degree angle and towards the rear of the animal. This is followed by the hind brain, which is roughly parallel to the forebrain and forms a roughly 40 degree angle with the midbrain. Overall, the brain of C. saharicus would have been similar to that of a related dinosaur, Allosaurus fragilis. Larsson found that the ratio of the cerebrum to the volume of the brain overall in Carcharodontosaurus was typical for a non-avian reptile. Carcharodontosaurus also had a large optic nerve.

The three semicircular canals of the inner ear of Carcharodontosaurus saharicus, when viewed from the side, had a subtriangular outline. This subtriangular inner ear configuration is present in Allosaurus, lizards, turtles, but not in birds. The semi-“circular” canals themselves were actually very linear, which explains the pointed silhouette. In life, the floccular lobe of the brain would have projected into the area surrounded by the semicircular canals, just like in other non-avian theropods, birds, and pterosaurs.

In 1924, two teeth were found in the Continental intercalaire of Algeria, showing what were at the time unique characteristics, this teeth were described by Depéret and Savornin (1925) as representing a new taxon, which they named Megalosaurus saharicus and later referred by the same authors to the subgenus Dryptosaurus. Some years later, paleontologist Ernst Stromer described the remains of a partial skull and skeleton from Cenomanian aged rocks in the Bahariya Formation of Egypt (Stromer, 1931), originally excavated in 1914, the remains consisted on a partial skull, teeth, vertebrae, claw bones and assorted hip and leg bones. The teeth in this new finding matched the characteristic of those described by Depéret and Savornin which lead Stromer to conserve the species name saharicus but found necessary to erect a new genus for this species, Carcharodontosaurus, for their strong resemblance to the teeth of Carcharodon (Great white shark).

The fossils described by Stromer were destroyed in 1944 during World War II but a new more complete skull was found in the Kem Kem Formation of Morocco during an expedition led by paleontologist Paul Sereno in 1995, not too far from the Algerian border and the locality where the teeth described by Depéret and Savornin (1925) were found, the teeth found with this new skull matched those described by Depéret and Savornin (1925) and Stromer (1931), the rest of the skull also matched that described by Stromer. This new skull was designated as the neotype by Brusatte and Sereno (2007) who also described a second species of Carcharodontosaurus, C. iguidensis from the Echkar Formation of Niger, differing from C. saharicus in aspects of the maxilla and braincase.

A study by Donald Henderson, the curator of dinosaurs at the Royal Tyrrell Museum suggests that Carcharodontosaurus was able to physically lift animals weighing a maximum of 424 kg (935 lb) in its jaws based on a study of the strength of its jaws, neck, and its center of mass.

SGM-Din 1, a Carcharodontosaurus saharicus skull, has a circular puncture wound in the nasal and “an abnormal projection of bone on the antorbital rim”.

The cervical rib of a long-necked dinosaur...

Move Over T-Rex: Newly-Identified First King of the Dinosaurs Announced

Thanks to films about the king of the...

There are many other types of...

Fossils have taught us an enormous amount...

Paleontologists are lucky to find complete...