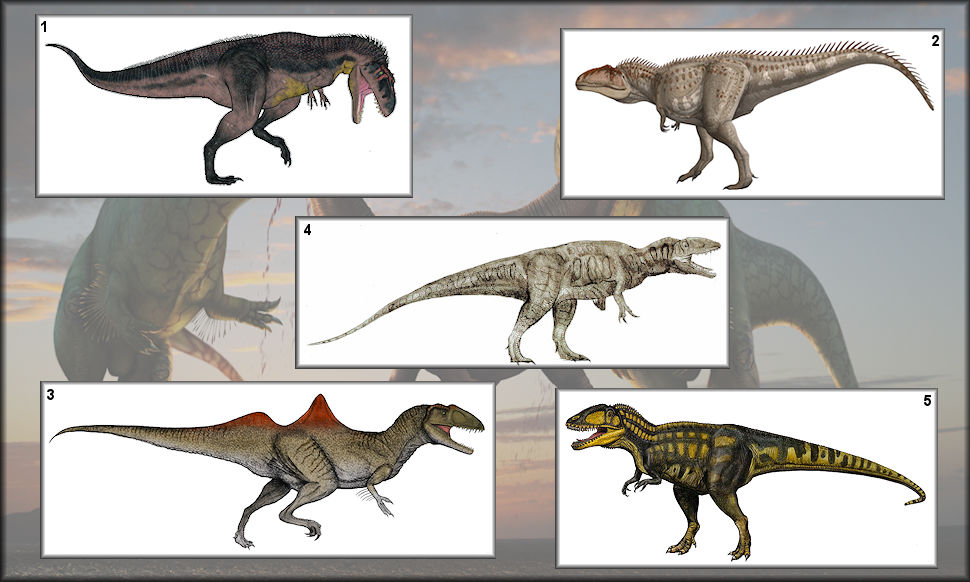 Along with the spinosaurids, carcharodontosaurids were the largest predators in the early and middle Cretaceous throughout Gondwana, with species also present in North America (Acrocanthosaurus), and Asia (Shaochilong). Their ages range from the Barremian (127-121 million years ago) to the Turonian (93-89 million years ago). Past the Turonian, they might have been replaced by the smaller abelisaurids in Gondwana and by tyrannosaurids in North America and Asia. According to Fernando Novas and colleagues, the disappearance of not only carcharodontosaurids but also spinosaurids and other fauna in both Gondwana and North America seem to indicate that this faunal replacement occurred on a global scale. However, some theropod teeth discovered in late Maastrichtian Marília Formation in Brazil, as well as a fragment of right maxilla discovered at the Campanian-Maastrichtian boundary of the Presidente Prudente Formation in Brazil, appear to belong to carcharodontosaurids, indicating the survival of this group until the latest Cretaceous, 70 to 66 mya. In December 2011, Oliver W. M. Rauhut described a new genus and species of carcharodontosaurid from the Late Jurassic (late Kimmeridgian to earliest Tithonian faunal stage, about 154-150 million years ago) of Tendaguru Formation, southeastern Tanzania. Veterupristisaurus represents the oldest known carcharodontosaurid.

The family Carcharodontosauridae was originally named by Ernst Stromer in 1931 to include the single newly discovered species Carcharodontosaurus saharicus. A close relative of C. saharicus, Giganotosaurus, was added to the family when it was described in 1995. Additionally, many paleontologists have included Acrocanthosaurus in this family (Sereno et al. 1996, Harris 1998, Holtz 2000, Rauhut 2003, Eddy & Clarke, 2011, Rauhut 2011), though others place it in the related family Allosauridae (Currie & Carpenter, 2000; Coria & Currie, 2002). Carcharodontosaurids are characterized by the following morphological characters : Dorsoventral depth of anterior maxillary interdental plates more than twice anteroposterior width, squared, sub-rectangular anterior portion of the dentary, teeth with wrinkled enamel surfaces, presence of four premaxillary alveoli and a premaxillary body taller than long in lateral aspect, opisthocoelous cervical vertebrae with neural spines more than 1.9 times the height of the centrum, large, textured rugosities on the lacrimal and postorbital formed by roofing and forming broad orbital shelves, and a proximomedially inclined femoral head. With the discovery of Mapusaurusin 2006, Rodolfo Coria and Phil Currie erected a subfamily of Carcharodontosauridae, the Giganotosaurinae, to contain the most advanced South American species, which they found to be more closely related to each other than to the African and European forms. Coria and Currie did not formally refer Tyrannotitan to this subfamily, pending a more detailed description of that genus, but noted that based on characteristics of the femur, it may be a gigantosaurin as well.

In 1998 Paul Sereno defined Carcharodontosauridae as a clade, consisting of Carcharodontosaurus and all species closer to it than to either Allosaurus, Sinraptor, Monolophosaurus, or Cryolophosaurus. Therefore, this clade is by definition outside of the clade Allosauridae.

A giant ostrich-like bird that lived about...

In secret patches of the south-central...

Fossil of ‘One of Last Dinosaurs’ Found on Island in Kagoshima

A fossil found on an island here two years...