An up-and-comer in the elite club of huge, terrifying, meat-eating dinosaurs, Giganotosaurus has lately been attracting almost as much press as Tyrannosaurus rex and Spinosaurus. On the following article, you’ll discover 10 fascinating Giganotosaurus facts–and why, pound for pound, the Giant Southern Lizard may have been even more fearsome than its better-known relatives.

The Name Giganotosaurus Has Nothing to Do with “Gigantic”

Giganotosaurus (pronounced GEE-gah-NO-toe-SORE-us) is Greek for “giant southern lizard,” not “gigantic lizard,” as it’s often mistranslated (and mispronounced, as “gigantosaurus”). This common error can be attributed to the numerous prehistoric animals that do, in fact, partake of the “giganto” root–two of the most notable examples being the giant feathered dinosaur Gigantoraptor and the giant prehistoric snake Gigantophis.

Giganotosaurus Was Bigger than Tyrannosaurus rex

Part of what has made Giganotosaurus so famous, so quickly, is the fact that it slightly outweighed Tyrannosaurus rex: full-grown adults may have tipped the scales at about 10 tons, compared to a little over nine tons for a female T. rex (which outweighed the male of the species). Even still, Giganotosaurus wasn’t the biggest meat-eating dinosaur of all time; that honor, pending further fossil discoveries, belongs to the truly humongous Spinosaurus of Cretaceous Africa.

Giganotosaurus May Have Preyed on Argentinosaurus

Direct proof is lacking, but the discovery of the bones of the giant titanosaur dinosaur Argentinosaurus in the proximity of those of Giganotosaurus hints at a predator-prey relationship. Since it’s hard to imagine a lone Giganotosaurus taking down a 50-ton Argentinosaurus adult, this may be a hint that this late Cretaceous meat-eater hunted in packs.

Giganotosaurus Was the Largest Meat-Eating Dinosaur of South America

Although it wasn’t the largest theropod of the Mesozoic Era – that honor, as stated previously, belongs to the African Spinosaurus–Giganotosaurus takes the crown as the largest meat-eating dinosaur of Cretaceous South America. (Fittingly enough, its presumed prey Argentinosaurus holds the title of “largest South American titanosaur.”)  South America, by the way, is where the very first dinosaurs evolved way back during the middle Triassic period, about 230 million years ago.

Giganotosaurus prowled the plains and woodlands of South America about 95 million years ago, a whopping 30 million years before its more famous relative, Tyrannosaurus rex, reared its head in North America. Oddly enough, though, Giganotosaurus was a near-contemporary of the biggest known meat-eating dinosaur, Spinosaurus. Why were the meat-eating dinosaurs of the late Cretaceous period comparatively petite compared to their middle Cretaceous forebears?

No one knows, but it may have had something to do with climate or the relative availability of prey.

Giganotosaurus Was Speedier Than T. rex

There has been a lot of debate lately about how fast Tyrannosaurus rex could run; some experts insist this supposedly fearsome dinosaur could only attain a top speed of a relatively pokey 10 miles per hour. But based on a detailed analysis of its skeletal structure, it seems that Giganotosaurus was a bit fleeter, perhaps capable of sprints of 20mph or more when chasing down prey, at least for short periods of time.

(Bear in mind that Giganotosaurus wasn’t technically a tyrannosaur, but a type of theropod known as a “carcharodontosaur.”)

Giganotosaurus Had an Unusually Small Brain for its Size

It may have been bigger and faster than Tyrannosaurus rex, but oddly enough, Giganotosaurus seems to have been a relative dimwit by middle Cretaceous standards, with a brain only about half the size of its more famous cousin, relative to its body weight. Adding insult to injury, to judge by its long, narrow skulll, Giganotosaurus’ tiny brain appears to have been the approximate shape and weight of a banana (which had yet to evolve 100 million years ago).

Giganotosaurus Was Discovered by an Amateur Fossil Hunter

Not all dinosaur discoveries can be credited to trained professionals. Giganotosaurus was unearthed in the Patagonian region of Argentina, in 1993, by an amateur fossil hunter named Ruben Dario Carolini. The paleontologists who examined the “type specimen” acknowledged Carolini’s contribution by naming the new dinosaur Giganotosaurus carolinii (to date, this is still the only known Giganotosaurus species).

To Date, No One Has Identified a Complete Giganotosaurus Skeleton

As is the case with many dinosaurs, Giganotosaurus was  "diagnosed" based on incomplete fossil remains, in this case a set of bones representing a single adult specimen. The skeleton discovered by Ruben Carolini in 1993 is about 70 percent complete, including the skull, hips, and most of the back and leg bones. To date, researchers have identified mere fragments of this dinosaur's skull, belonging to a second individual--which is still enough to peg this dinosaur as a carcharodontosaur

As is the case with many dinosaurs, Giganotosaurus was  “diagnosed” based on incomplete fossil remains, in this case a set of bones representing a single adult specimen. The skeleton discovered by Ruben Carolini in 1993 is about 70 percent complete, including the skull, hips, and most of the back and leg bones. To date, researchers have identified mere fragments of this dinosaur’s skull, belonging to a second individual–which is still enough to peg this dinosaur as a carcharodontosaur.

Giganotosaurus Was Closely Related to Carcharodontosaurus 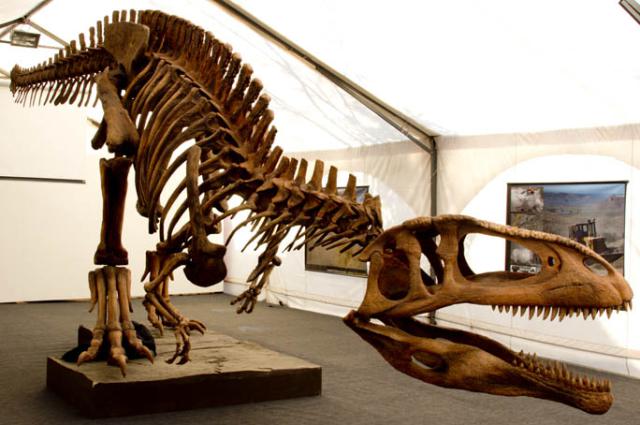 There’s something about giant predatory dinosaurs that inspires paleontologists to come up with cool-sounding names. Carcharodontosaurus (“great white shark lizard”) and Tyrannotitan (“giant tyrant”) were both close cousins of Giganotosaurus, though the first lived in northern Africa rather than South America. (The exception to this terrifying-name rule is the plain-vanilla-sounding Mapusaurus, aka the “earth lizard,” another plus-sized Giganotosaurus relative.)

So, you love dinosaurs. You’re probably...

From Field to Museum: How Dinosaur Fossils are Prepared

When people think of a...

Dinosaurs are often said to have “ruled” the...

A team of Japanese and Russian scientists...

Talk about a blast from the...

The Top Ten Dinosaur Discoveries of 2020

Paleontologists uncovered a great deal about...

When it comes to naming ancient species,...