Before the Dinosaurs | Paleontology World

252 million years ago, the Permian extinction wiped out much of the life on Earth. Unlike the K-T extinction event, this wasn’t the one that killed the dinosaurs, this was the one that paved the way for their existence.

“That was the biggest extinction,” said Christian Sidor, a professor of biology who studies the years around Permian-Triassic extinction. “Some people have said that [it killed] maybe 70 percent [of life] on land and 90 percent in the oceans.”

The Permian-Triassic extinction paved the way for new species who are the precursors of mammals and archosaurs, the precursors to the dinosaurs. These species repopulated the Earth and evolved into the creatures known today.

The best place to find fossils from this era, according Sidor, is in South Africa, specifically in the Karoo Basin. Though it is a good place to look for fossils from this era, only utilizing this one site can be problematic. These fossils help shed light on what life was like in that region, but are less informative about the extinction event far away.

Mountain-building is essentially the process of uplift when two tectonic plates collide. This idea drove Sidor to look for Permian-Triassic fossils in other areas to help control for the diverse geographies in different regions. Sidor wanted to see if the same patterns in the fossil record were seen regionally so he went to Tanzania in 2007 and 2008 to dig for fossils.

In 2009, they received a grant to go to Zambia. One of the big differences is that in Tanzania and Zambia, the tectonic activity resulted in rift basins instead of mountains. Rift valleys often have much more detailed fossils because their geological development is much shorter than mountains.

“The rocks in Zambia and Tanzania are 242 million years old and we’ve found some very close relatives of dinosaurs,” Sidor said. “You don’t see those species in the same rocks in South Africa. One of the other things we discovered is that before the extinction, the fossil record of Tanzania and Zambia is more or less the same [as in South Africa]. And then you go after the extinction, the three different places end up looking very different. After the mass extinction, everything gets wiped out, and different groups can actually repopulate in different ways in different places.”

The fossils the team found were early relatives of amphibians, mammals, and reptiles. The rise of the archosaur after this extinction event paved the way for the era of dinosaurs. Today, the only living relatives of archosaurs are birds and crocodiles.

“Archosaurs really radiated after the mass extinction,” Sidor said. “And one of their groups, dinosaurs, by the time of the late Triassic, they were the dominant animals. This was the beginning of the dinosaur era.”

Since first visiting Tanzania in 2007, they’ve gone back about ten times and collected around 2,200 fossils, which Sidor calls “a pretty substantial collection.”

“The fossils that we find are totally unique,” said Savannah Olroyd, one of Sidor’s current graduate students. “It was great to be a part of something where you’re finding something that’s totally new.”

This summer, the team will return to Zambia to look for more fossils. The expedition will be led by Brandon Peecook, a former student of Sidor’s who is now at the Field Museum of Natural History in Chicago.

“The work in Zambia especially is pretty awesome because the fossil sites are in the national parks,” Peecook said. “So not only are you finding very cool extinct animal fossils, but you’re doing it and having to deal with elephants and lions and giraffes and stuff. It’s a pretty fun place to be.” 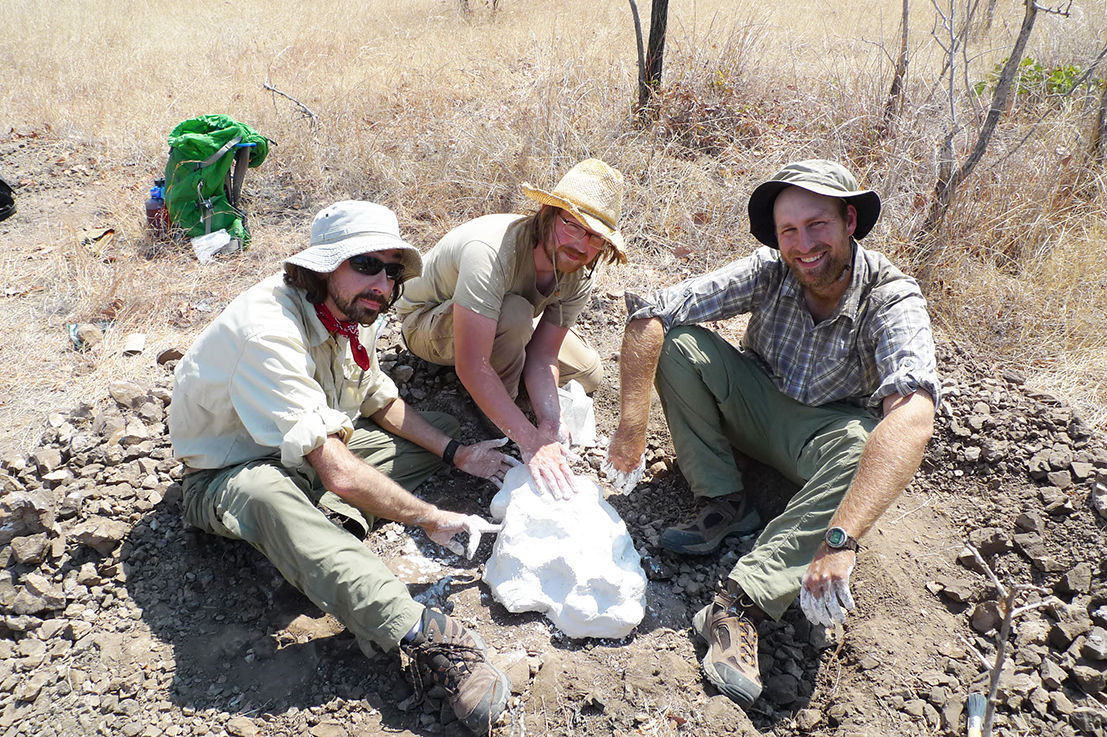 Researchers on the Zambia expedition are exploring how mammals became mammals, the evolution of teeth and jaws in early species, and filling in missing evolutionary links. Peecook is interested in studying the Permo-Triassic ecosystem, particularly “how ecosystems fall apart and how they put themselves back together.”

Finding fossils is no easy task, so even though they all have different interests, everyone on the expedition will be looking for whatever fossils they can find. According to Sidor, 90 percent of the process is prospecting. Nowadays, the team uses technology such as Google Earth and GPS units to figure out where they will look for fossils.

“It’s really hard work,” Olroyd said. “You’re hiking for a really long way, several kilometers every day, you’re out there all day, and you’re basically by yourself. It’s just you and Africa, basically.”

But in Zambia, there are still new horizons and fossils waiting to be discovered.

Paleontologists have found trapped in a...

The boy reportedly recognized what the eggs...

Dinosaurs, Craters, Animals and a Hike: 10 Family-Friendly Activities in Utah for 2019

When traveling across the state of Utah,...

10 Best Video Games For Fans Of The Jurassic Park Series

Where to find Jurassic World easter eggs in Fortnite Season 5

Fortnite Chapter 2, Season 5 has plenty of...

There are few films in history that...

The Chengjiang biota in the Yunnan Province...