The 10 Types of Dinosaur Bones that Paleontologists Study | Paleontology World

The 10 Types of Dinosaur Bones that Paleontologists Study 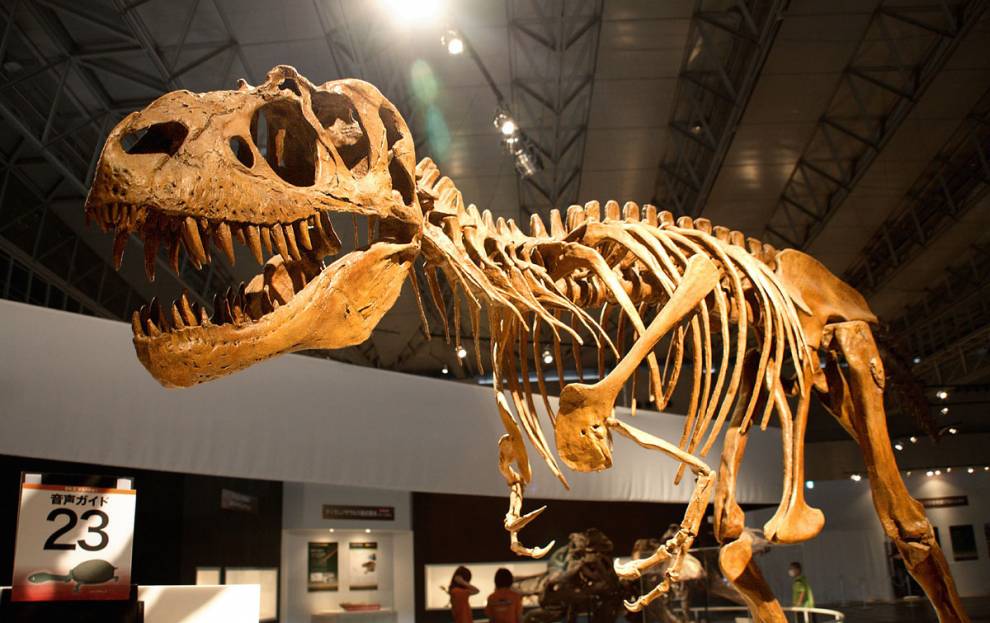 THE THIGH BONE’S CONNECTED TO THE HIP BONE….

The vast majority of dinosaurs are diagnosed by paleontologists based not on complete skeletons, or even near-complete skeletons, but scattered, disconnected bones like skulls, vertebrae and femurs. On the following slides, you’ll discover a list of the most important dinosaur bones, and what they can tell us about the dinosaurs of which they were once a part.

The overall shape of a dinosaur’s head, as well as the size, shape and arrangement of its teeth, can tell paleontologists a lot about its diet (for example, tyrannosaurs possessed long, sharp, backward-curving teeth, the better to hang onto still-wriggling prey). Herbivorous dinosaurs also boasted bizarre skull ornamentation – the horns and frills of ceratopsians, the crests and duck-like bills of hadrosaurs, the thick crania of pachycephalosaurs–which yield valuable clues about their owners’ everyday behavior. Oddly enough, the biggest dinosaurs of all–sauropods and titanosaurs–are often represented by headless fossils, since their relatively tiny noggins were easily detached from the rest of their skeletons after death.

As we all know from the popular song, the head bone’s connected to the neck bone–which ordinarily wouldn’t cause much excitement among fossil hunters, except when the neck in question belonged to a 50-ton sauropod. The 20- or 30-foot-long necks of behemoths like Diplodocus and Mamenchisaurus were made up of a series of huge, but relatively lightweight, vertebrae, interspersed with various air pockets to lighten the load on these dinosaurs’ hearts. Of course, sauropods weren’t the only dinosaurs to have necks, but their disproportionate length–about on a par with the caudal vertebrae (see below) constituting these creatures’ tails–put them, well, head and shoulders above others of their breed.

METATARSALS AND METACARPALS (HANDS AND FEET)

About 400 million years ago, nature settled on the five-fingered, five-toed body plan for all terrestrial vertebrates (though the hands and feet of many animals, such as horses, bear only vestigial remnants of all but one or two digits). As a general rule, dinosaurs possessed anywhere from three to five functional fingers and toes at the end of each limb, an important number to keep in mind when analyzing preserved footprints and trackmarks. Unlike the case with human beings, these digits weren’t necessarily long, flexible, or even visible: you’d have a hard time making out the five toes at the end of the average sauropod’s elephant-like feet, but rest assured they were really there.

In all tetrapods, the ilium, ischium and pubis make up a structure called the pelvic girdle, the crucial part of an animal’s body where its legs connect to its trunk (slightly less impressive is the pectoral girdle, or shoulder blades, which does the same for the arms). In dinosaurs, the pelvic bones are especially important because their orientation allows paleontologists to distinguish between saurischian (“lizard-hipped”) and ornithischian (“bird-hipped”) dinosaurs. The pubis bones of ornithischian dinosaurs point down and toward the tail, while the same bones in saurischian dinosaurs are oriented more horizontally (oddly enough, it was a family of “lizard-hipped” dinosaurs, the small, feathered theropods, that wound up evolving into birds!)

In most ways, the skeletons of dinosaurs aren’t all that different from the skeletons of human beings (or of just about any tetrapod, for that matter). Just as people possess a single, solid upper arm bone (the humerus) and a pair of bones comprising the lower arm (the radius and ulna), the arms of dinosaurs followed the same basic plan, though of course with some major differences in scale. Because theropods had a bipedal posture, their arms were more differentiated from their legs, and thus are studied more often than the arms of herbivorous dinosaurs (for example, no one knows for sure why Tyrannosaurus rex and Carnotaurus had such small, puny arms, though there’s no shortage of theories.)

Between a dinosaur’s cervical vertebrae (i.e., its neck) and its caudal veterbrae (i.e., its tail) lay its dorsal vertebrae–what most people refer to as its backbone. Because they were so numerous, so big, and so resistant to “disarticulation” (i.e., falling apart after their owner died), the vertebrae comprising dinosaurs’ spinal columns are among the most common bones in the fossil record, and also some of the most impressive from an aficionado’s point of view. Even more tellingly, the vertebrae of some dinosaurs were topped by strange “processes” (to use the anatomical term), a good example being the vertically oriented neural spines that supported the distinctive sail of Spinosaurus.

As was the case with their arms (see slide #6), the legs of dinosaurs had the same basic structure as the legs of all vertebrates: a long, solid upper bone (the femur) connected to a pair of bones comprising the lower leg (the tibia and fibula). The twist is that dinosaur femurs are among the biggest bones excavated by paleontologists, and among the biggest bones in the history of life on earth: the specimens from some species of sauropods are about as tall as a full-grown human being. These foot-thick, five- or six-foot-long femurs imply a head-to-tail length for their owners of well over a hundred feet and weights in the range of 50 to 100 tons (and the preserved fossils themselves tip the scales at hundreds of pounds!)

The herbivorous dinosaurs of the Mesozoic Era required some form of protection against the ravenous theropods that preyed on them. Ornithopods and hadrosaurs relied on their speed, smarts and (possibly) the protection of the herd, but stegosaurs, ankylosaurs and titanosaurs evolved often-elaborate armor plating made up out of bony plates known as osteoderms (or, synonymously, scutes). As you can imagine, these structures tend to be well-preserved in the fossil record, but they’re often found beside, rather than attached to, the dinosaur in question–which is one reason we still don’t know exactly how the triangular plates of Stegosaurus were arranged along its back!

Not all dinosaurs possessed a full set of sterna (breastbones) and clavicles (collar bones); sauropods, for example, seem to have lacked breastbones, relying on a combination of clavicles and free-floating rib bones called “gastralia” to support their upper trunks. In any event, these bones are only rarely preserved in the fossil record, and thus aren’t nearly as diagnostic as vertebrae, femurs and osteoderms. Crucially, it’s believed that the clavicles of early, less advanced theropods evolved into the furculae (wishbones) of the “dino-birds,” raptors and tyrannosaurs of the late Cretaceous period, an important piece of evidence confirming the descent of modern birds from dinosaurs.

All dinosaurs possessed caudal vertebrae (i.e., tails), but as you can see by comparing an Apatosaurus to a Corythosaurus to an Ankylosaurus, there were major differences in tail length, shape, ornamentation and flexibility. Like cervical (neck) and dorsal (back) vertebrae, caudal vertebrae are well represented in the fossil record, though often it’s their associated structures that say the most about the dinosaur in question. For example, the tails of many hadrosaurs and ornithomimids were stiffened by tough ligaments–an adaptation that helped to maintain their owners’ balance–while the flexible, swinging tails of ankylosaurs and stegosaurs were often capped by club-like or mace-like structures.

Carnotaurus Had Scaly Skin with No Feathers, Paleontologists Say

Paleontologists have described in detail for...

These Dinosaurs Tooted Their Own Horns

The sounds made by...

Canadian High Arctic Islands Were Once Home to Rich Forests