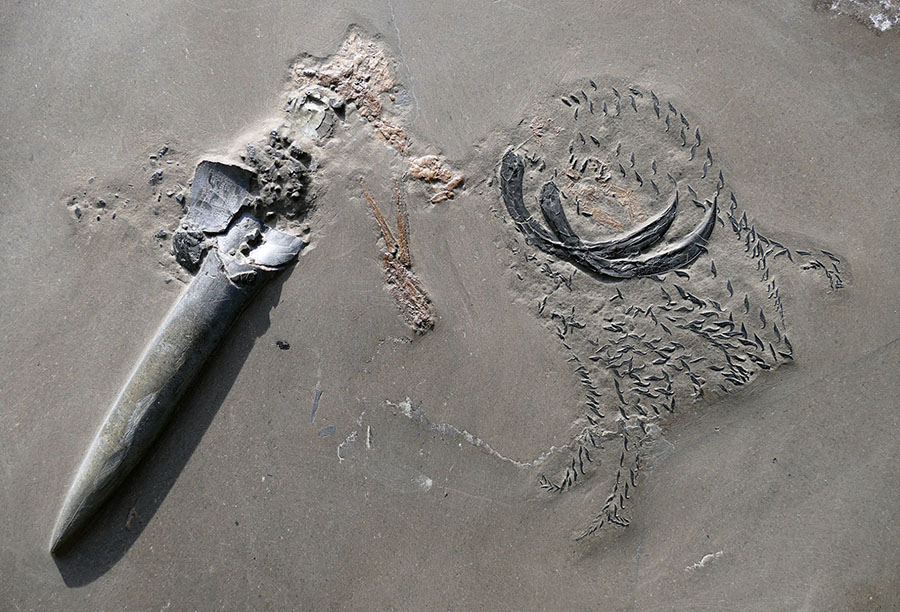 A fossilized squid-like cephalopod holds crustacean remains in its arm crown and, in turn, represents the remains of the meal of a predatory shark, according to a new study.

The unique fossil dates back from the Early Jurassic period, approximately 180 million years ago, and was originally found in 1970 by the fossil collector Dieter Weber.

The slab was extracted from the Posidonienschiefer Formation (Posidonia Shale) exposed in the now abandoned Gonser quarry at Ohmden near Holzmaden in Germany.

One of the study authors, Dr. Günter Schweigert, recognized its importance during a visit of Dieter Weber’s collection in 2019 and the specimen was subsequently purchased by the Staatliches Museum für Naturkunde Stuttgart.

“For paleontology, the Posidonia Shale offered a rare combination of a shallow to moderately deep continental marine basin, in which oxygen became depleted numerous times during the Toarcian age of the Jurassic period,” Dr. Schweigert and colleagues explained.

“Often, the oxygen content was too low to sustain scavengers and, in the absence of strong currents, skeletons had a reasonable likelihood to preserve in articulation and soft parts of embedded carcasses could become fossilized.”

The specimen examined by the team preserves a belemnite and the remains of the decapod crustacean Proeryon in the belemnite’s arm crown.

“We suggest the term leftover fall for the event and the term pabulite for the fossilized meal when it never entered the digestive tract,” the paleontologists said.

“Usually, pabulites are incomplete organismal remains and show traces of the predation.”

The belemnite belongs to Passaloteuthis laevigata, a well-known and frequent belemnite species in the lowermost Toarcian of Europe and Morocco.

It preserves the rostrum, a few soft part remains, while the arm crown is one of the best-preserved of its kind.

“Belemnites played a key role in the marine basins of Europe during the Jurassic,” the researchers said.

“There is a growing body of evidence that belemnoids and their relatives preyed upon fish nearly as long as their mantle.”

“It is still a matter of debate whether they were ambush predators or able to chase their prey to some extent.”

“With their pointed beaks, they were able to hold, immobilize and cut prey.”

“Recently, it was suggested that they might have been able to break ammonite conchs in order to facilitate withdrawal of the soft parts.”

The fossilized belemnite also displays damage indicative of predation by a larger animal.

“Remarkably, most of the belemnite soft parts between the arm crown and the calcitic rostrum are missing,” the scientists said.

“We suggest that this represents remains of a meal of a vertebrate predator, possibly of the Early Jurassic shark Hybodus hauffianus.”

“This is remarkable, because it informs about the behavior of a cephalopod and a vertebrate predator.”

A paper on the findings was published in the Swiss Journal of Palaeontology.