What Are These 520-Million-Year-Old Blobs? Experts Can't Agree. | Paleontology World

What Are These 520-Million-Year-Old Blobs? Experts Can't Agree. 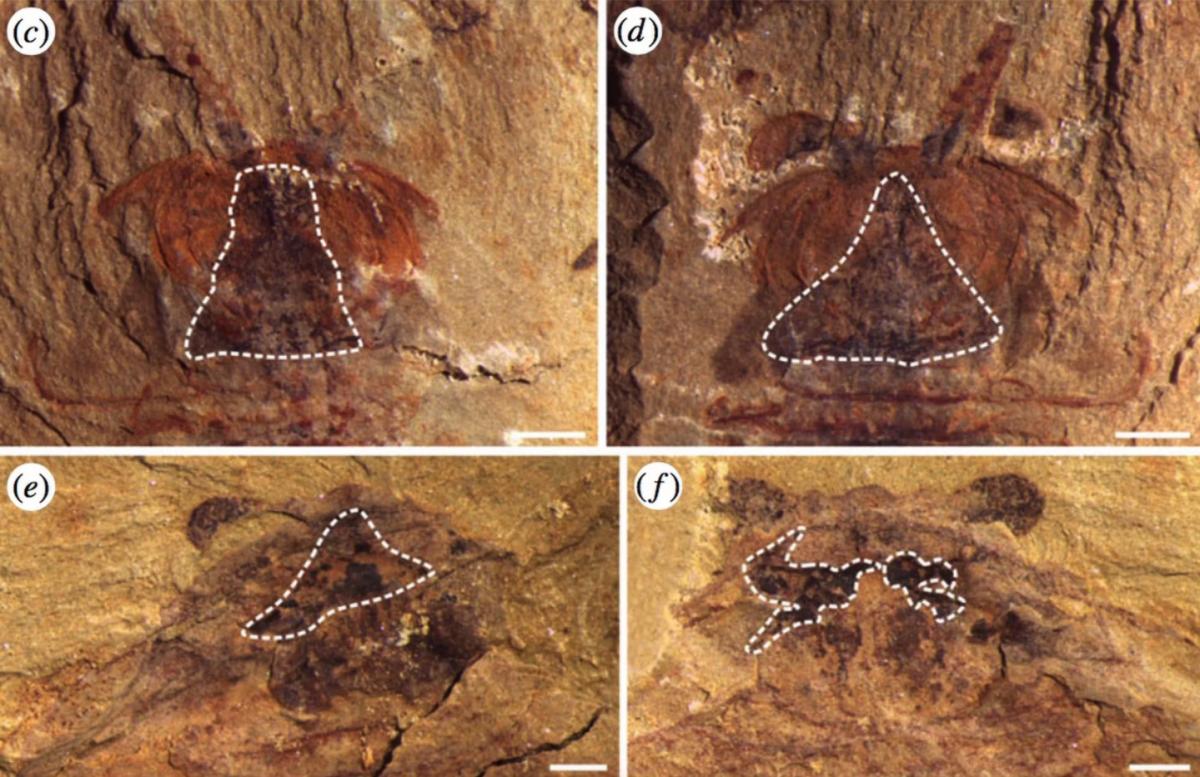 Here's a brainteaser: Do the 520-million-year-old fossils of an ancient, bug-like creature actually show a silhouette of its brains? Or are these blobby shapes in its head merely fossilized bacteria?

According to a new study, the fossilized structures in the Cambrian-period creature's head aren't brainy remains, but rather fossilized bacterial mats, called biofilms.

However, not everyone is on board with this interpretation. The researchers who originally discovered the brains are standing by their results, and other paleontologists Live Science interviewed agree with them.

The creature in question, Fuxianhuia protensa, is an early arthropod, a group that includes modern-day insects, spiders and crabs. The roughly 3-inch-long (7.6 centimeters) segmented critter lived in what is now southern China during the Cambrian, a period that lasted from about 542 million to 488 million years ago.

But researchers in China and Germany had their doubts. They decided to check if they, too, could find fossilized F. protensa brains. After examining about 800 fossilized specimens, the researchers noticed that 10 percent had blobby structures in the head region.

But these blobs weren't uniform in shape, and this made them "question whether the 'brains' in the original studies were really being interpreted correctly," said the new study's lead researcher, Jianni Liu, a professor at the Early Life Institute in the Department of Geology at Northwest University, in Xi'an, China.

Liu and her colleagues presented an alternate hypothesis in a study published online yesterday (April 11) in the journal Proceedings of the Royal Society B: Biological Sciences.

Liu's team suspected that, instead of brains, these odd cranial structures were fossilized bacteria. That's because, after arthropods die, the bacteria in their gut creates biofilms, "which can rupture out of the gut wall and form structures which might superficially resemble brains, nerves or other internal organs," she said.

Liu and her colleagues also read studies detailing how modern arthropods decay after death. These studies showed that "the brain and nervous system actually decays very quickly," meaning it often doesn't have a chance to fossilize, Liu told Live Science. (Strausfeld disputes this notion. He and his colleagues showed that neural tissue can be preserved if the arthropod is quickly buried in a slurry of mud and seawater and then subjected to sustained pressure, comparable to conditions of entombment, he said.)

Liu and her team, however, did acknowledge that it is possible to discover fossilized brains in Cambrian-period arthropods. For instance, another 520-million-year-old early arthropod, known as Chengjiangocaris, has "more pristine tissue preservation … that have convincingly been interpreted as ventral nerve cords," the researchers wrote in the study.

Other paleontologists told Live Science they weren't swayed by the new results. For one thing, Liu's team did not examine the fossils described in the previous studies, said Peter Van Roy, a paleobiologist at Ghent University in Belgium who wasn't involved with any of the studies.

"They did not look at the actual specimen that supposedly shows the brain," Van Roy told Live Science. "That is quite a major shortcoming."

Moreover, the brains in the previous studies were perfectly symmetrical, just like the brains of modern arthropods are today. "We can even resolve axon [nerve] bundles in the fossilized optic lobes, as well as evidence of fiber tracts across the brain," Strausfeld told Live Science.

In contrast, the blobs Liu and her colleagues found were asymmetrical and obviously not brains, Strausfeld said.

Jakob Vinther, a United Kingdom-based paleontologist who wasn't involved in the studies but has studied other fossilized Cambrian brains, said he was "highly skeptical" of the new study's conclusions.

"Fuxianhuia was the first Cambrian fossil to have been argued to preserve nervous system [material]," and other fossilized brains have been found since then, Vinther told Live Science. "Criticizing the initial study that made the foundations for the paradigm while not rejecting the subsequent studies is problematic, and hence, for that reason alone, the study fails to make a solid claim," Vinther said.

Moreover, just because fossilized brains are rare doesn't mean they don't exist, Vinther said. For instance, "most dinosaurs don't preserve feathers, but that doesn't mean that we think that they are artifacts [fabrications]."

Even so, the new study does bring up an important point, Van Roy said: It may push paleontologists even further than before to show that so-called fossilized brains are, in fact, neural remains, he said.