When it comes to naming ancient species, some palaeontologists have a little more fun than others.

Every species – alive or extinct – receives a two-part scientific name, made up of its genus and species. From Homo sapiens to Tyrannosaurus rex, each of those monikers has a meaning and a story, and while most names are pretty straightforward, sometimes palaeontologists get a bit more creative.

So, in a nod to National Fossil Day in the US, here’s a list of some of the greatest prehistoric naming hits from across the fossil record. 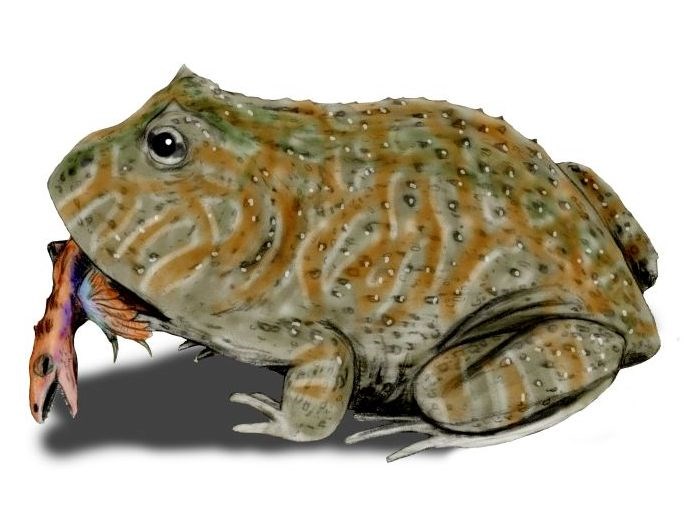 In the land of Madagascar, 70 million years ago, near the end of the “Age of Dinosaurs”, there lived one hell of a frog.

Weighing a hefty five kilograms (10lbs) or more, this ancient amphibian might be the largest frog of all time: it boasted an armoured skull with jaws 15cm (6in) wide, capable of delivering a bite wicked enough to put small dinosaurs on the menu.

Faced with the task of naming this demon-frog in 2008, Susan Evans and colleagues came up with Beelzebufo, combining “Bufo” from the Latin for “toad” and Beelzebub, a most devilish namesake.

Fun fact: the frog’s full name is Beelzebufo ampinga. The species epithet, ampinga, comes from the Malagasy word for “shield”, referring to the frog’s bony-armoured head. 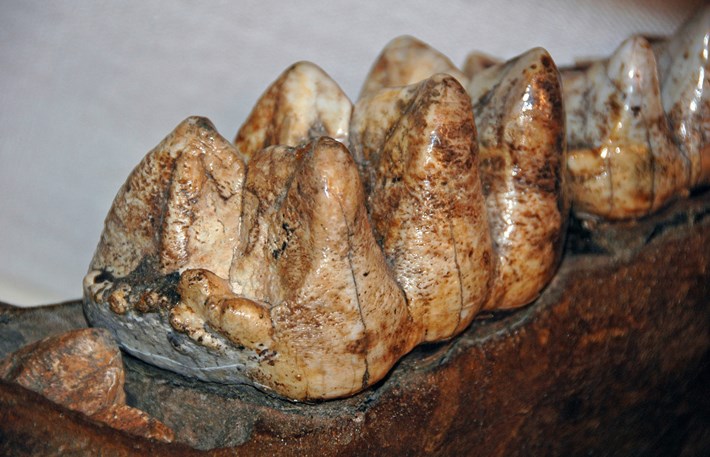 The easiest way to tell a mastodon from a mammoth is to look at the teeth: mammoth chompers are flat and grooved, while mastodon teeth are bumpy and look … well, like breasts. At least that’s what the father of palaeontology, Georges Cuvier, thought! (The first half of the name “mastodon” comes from the same Greek root as the word “mastectomy”.)

The meaning of mastodon has changed over the years. When Cuvier came up with the name in 1817, he intended Mastodon to be the genus for one specific extinct proboscidean (a member of the mammal group that includes elephants and their extinct relatives), but that ancient animal turned out to be no different from a genus that had already been named Mammut. By the rules of taxonomy (scientific naming), the original name stuck, and “Mastodon” was dropped, but the word became so popular that we now use it to refer to a whole section of the elephant family tree, including Mammut and its relatives: the mastodons.

Fun fact: An alternative name given to Mammut, and later dropped for the same reason, was Leviathan! 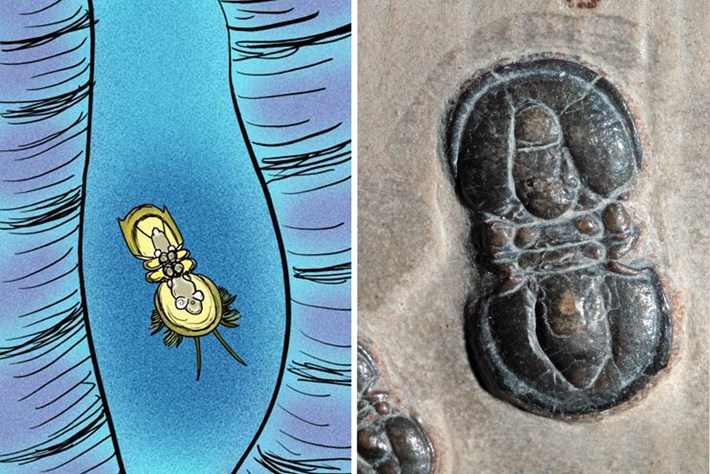 Trilobites, the ubiquitous bugs of the Paleozoic Era (a long time ago), are some of the most famous fossils on the planet, but few have such famous names.

In 2007, Samuel Turvey described a collection of trilobites from China, including a few new species. For one of them, he invented the genus Han, named – as he explained – after the Han Chinese of the region. And since this was the very last known trilobite of its kind (a group called diplagnostids), he gave it a lonesome species name: solo.

(And that’s how a scientist cleverly justifies naming a 514-million-year-old arthropod after the legendary captain of the Millennium Falcon.)

Fun fact: Another new trilobite species Turvey named in the same paper was Geragnostus waldorfstatleri, a nod to the famous hecklers from The Muppet Show.

During the last Ice Age (the Pleistocene Epoch), Australia was home to some gnarly reptiles, including a species of turtle with horns on its head, a club on its tail and a body weight upwards of 200 kilograms (440lbs). An animal like that requires a bodacious name, so Eugene Gaffney named it Ninjemys, the “ninja turtle”.

Unlike Turvey’s Han solo, Gaffney made no effort to reason around his nerdery. He explained right there in the scientific paper that the name is “in allusion to that totally rad, fearsome foursome epitomising shelled success”.

The turtle’s full name is Ninjemys oweni, in honour for palaeontologist Richard Owen (this species was originally Meiolania oweni, but Gaffney re-assigned the genus).

Fun fact: Pop-culture references abound in paleontological naming! Just this year, we’ve seen a dinosaur named after a Ghostbusters villain and a mammal-relative with a moniker suspiciously similar to a Pokémon. 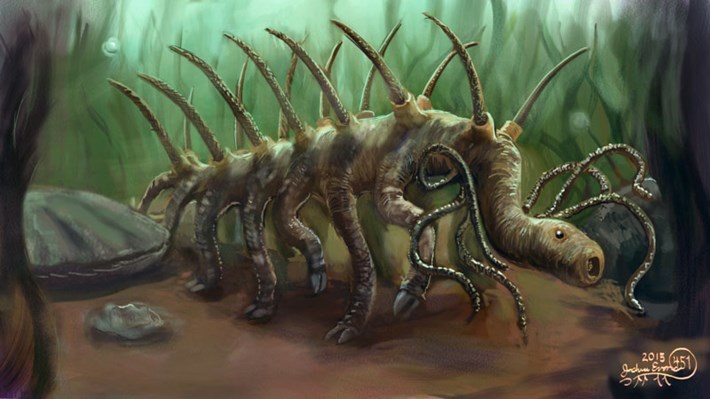 In 1977, Simon Conway Morris struggled to describe a positively phantasmagorical animal with 14 paired “stilts” and 14 paired “tentacles” running along its wormy body, and a strange bulb-like structure at one end. Its remains are found in the Burgess Shale, a Canadian fossil site that hosts some of the earliest and strangest animal life in the fossil record, from over 500 million years ago.

The creature defied the palaeontologist’s attempts to explain its body features, or to identify it among known animals (indeed, many of his initial guesses turned out to be incorrect), and he gave it a fittingly fantastic name: Hallucigenia, referring to “the bizarre and dream-like appearance of the animal”.

Try saying that name three times fast. Or even one time slowly.

Kimmeridgebrachypteraeschnidium etchesi is an extinct dragonfly from the Jurassic Period, around 150 million years ago, named in 2003. It makes the list simply because, as far as I can tell, it has the world’s longest genus name! And if it isn’t the longest, it’s gotta be close!

Crammed into the 31 letters of its genus are references to the location where it was found – Kimmeridge Bay, in the UK – its short wings, and the group of dragonflies it belongs to: the Aeschnidiidae.

Fun fact: Fossil genus names can also be ridiculously short, such as the dinosaurs Yi and Zby. 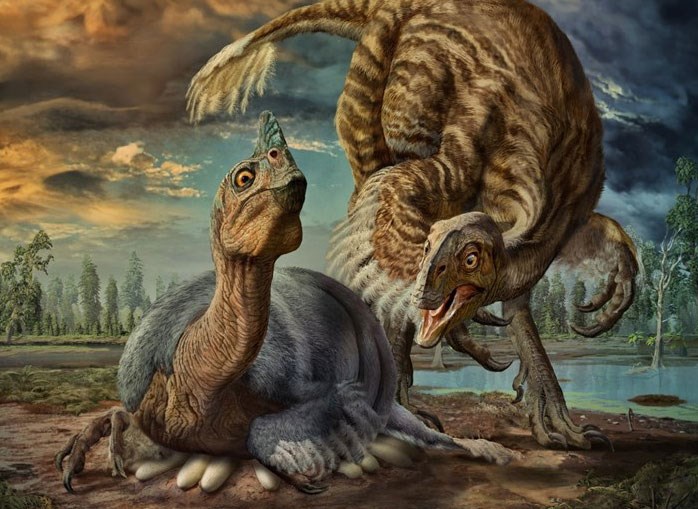 More than two decades ago, a 90-million-year-old dinosaur embryo was discovered among a nest of giant eggs in China. This tiny fossil eventually earned the affectionate name “Baby Louie”, and when researchers finally got to assign it a scientific name earlier this year, they opted for the adorable moniker Beibeilong, from Chinese words meaning “baby dragon”.

Funnily enough, the palaeontologists estimated that an adult Beibeilong would have been a feathery giant around eight metres (30 feet) long and weighing over two tons, so if an adult is ever discovered, you may someday walk into a museum to see a bus-sized skeleton labelled “baby dragon”!

Fun fact: Beibeilong isn’t the only dinosaur that received a cutesy name based on the fossil’s informal nickname. There’s a similar story behind the little predator Bambiraptor. 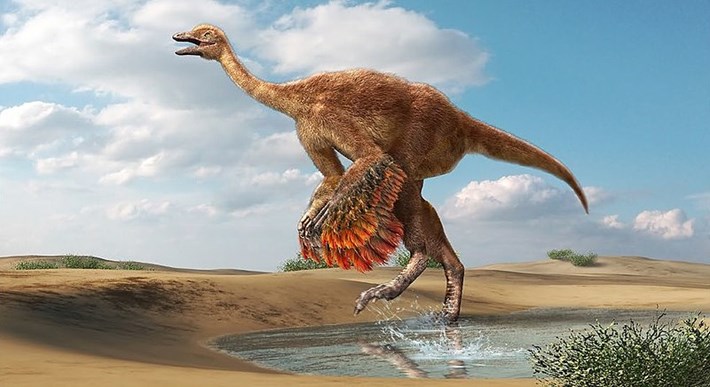 Since then, this group of dinosaurs (the ornithomimosaurs) has welcomed many more additions, including: Dromiceiomimus, the “emu mimic”; Gallimimus, the “chicken mimic”; Garudimimus, the “Garuda (a bird of Hindu legend) mimic”; Harpymimus, the “harpy mimic”; Anserimimus, the “goose mimic”; Pelecanimimus, the “pelican mimic”; and Tototlmimus, another “bird mimic”.

Not all of those names are still in use, but more continue to be added to the list, such as Aepyornithomimus, a “mimic” of the extinct Madagascar elephant bird (Aepyornis), named just this year.

Fun fact: There are other “mimics” on other parts of the dinosaur family tree! For example, there’s the big predator Suchomimus (“crocodile mimic”) and the fluffy-tailed Sciurimimus (“squirrel mimic”).

Press the centre of your tongue against the high roof of your mouth and make a “click” noise. That is a post-alveolar click, the sound at the beginning of this dinosaur’s name: “n-*click*-webasaurus”.

Nqwebasaurus was a small, early relative of the “ostrich-mimics” that lived 140 million years ago in South Africa. It is named after the region where it was discovered, which is called Nqweba in the local language, Xhosa.

The Latinised pronunciation of this animal’s name would be “n-KWE-ba” – this is actually how the authors of the original paper spelled it out – but if you want to pay homage to the original language, and impress your friends, then practice that post-alveolar click!

Fun fact: Weaving local languages into dinosaur names can produce lots of memorable results, such as the Argentinian sauropod Futalognksosaurus and the Arctic tyrannosaur Nanuqsaurus. 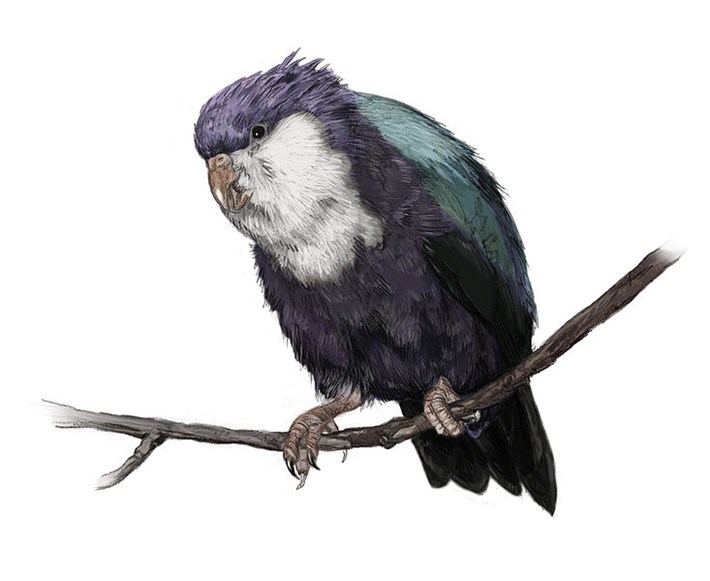 Take a trip around the tropical islands of the Pacific, and you might encounter the ostentatiously coloured lorikeets of the genus Vini. There are several species alive today, but when palaeontologists David Steadman and Marie Zarriello explored the fossils of the Marquesas Islands, they discovered that when humans arrived in the birds’ home, not all Vini species survived the encounter.

In naming those extinct species, Steadman and Zarriello came up with one of the cleverest puns in all of fossil nomenclature: Vini vidivici, inspired by Caesar’s famous declaration, “Veni, vidi, vici”.

The scientists explain the name in their paper: “The meaning, ‘I came, I saw, I conquered’, may be projected into the prehistoric situation in the Marquesas and elsewhere in Polynesia, where people came to an island, saw the native parrots, and then conquered them, leaving behind only the bones.”

Fun fact: This list would be incomplete without mentioning that, in 1763, before the word “dinosaur” was even invented, physician Robert Brookes assigned a binomial name to the bulbous end of a dinosaur femur. Some have called this the first scientific name ever assigned to a dinosaur, but for various reasons it did not stick – which might be for the best, because he called it Scrotum humanum.

Is the Jurassic Franchise Headed Back to the Stone Age?

The fossilized tail of a young dinosaur that...

A team of paleontologists led by ...

Robot Recreates the Walk of a 290-Million-Year-Old Creature

How did the earliest land animals move?...

Paleontologists in Morocco have unearthed a...

A new genus and species of an early...

An international team of paleontologists has found the...