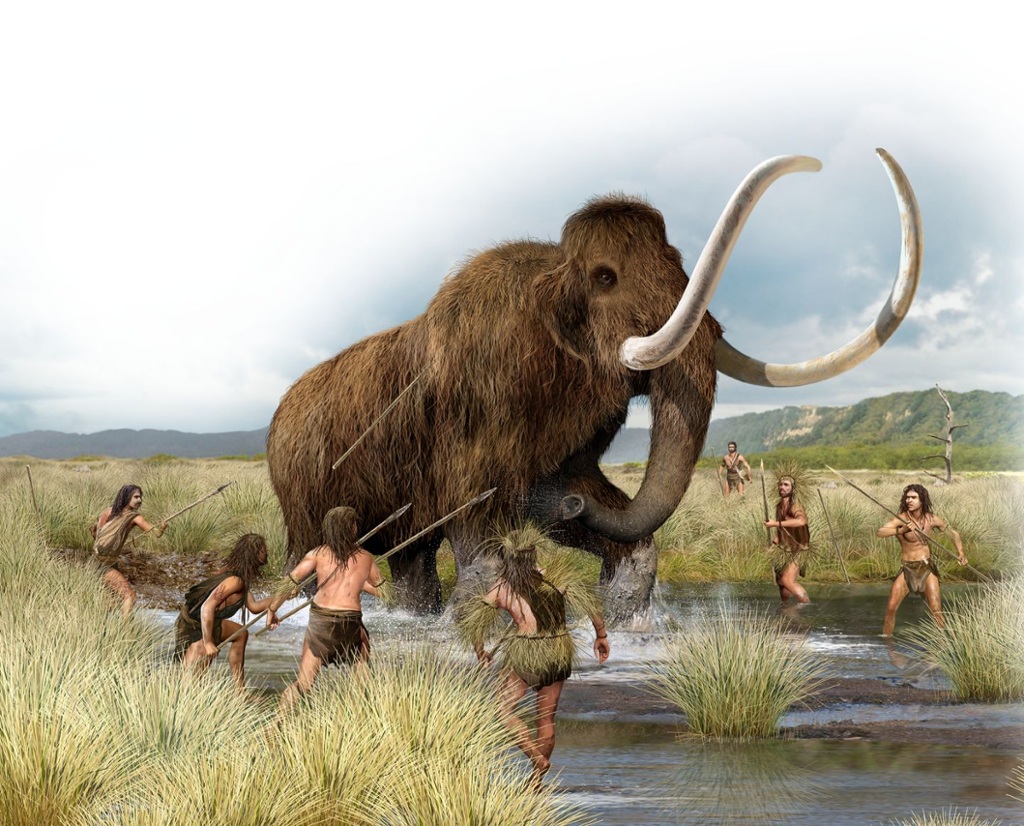 The Pleistocene Epoch is typically defined as the time period that began about 1.8 million years ago and lasted until about 11,700 years ago. The most recent Ice Age occurred then, as glaciers covered huge parts of the planet Earth.

There have been at least five documented major ice ages during the 4.6 billion years since the Earth was formed — and most likely many more before humans came on the scene about 2.3 million years ago.

At the time of the Pleistocene, the continents had moved to their current positions. At one point during the Ice Age, sheets of ice covered all of Antarctica, large parts of Europe, North America, and South America, and small areas in Asia. In North America they stretched over Greenland and Canada and parts of the northern United States. The remains of glaciers of the Ice Age can still be seen in parts of the world, including Greenland and Antarctica.

But the glaciers did not just sit there. There was a lot of movement over time, and there were about 20 cycles when the glaciers would advance and retreat as they thawed and refroze. Scientists identified the Pleistocene Epoch’s four key stages, or ages — Gelasian, Calabrian, Ionian and Tarantian.

The name Pleistocene is the combination of two Greek words: pleistos (meaning “most”) and kainos (meaning “new” or “recent”). It was first used in 1839 by Sir Charles Lyell, a British geologist and lawyer.

As a result of Lyell’s work, the glacial theory gained acceptance between 1839 and 1846, and scientists came to recognize the existence of ice ages. During this period, British geologist Edward Forbes aligned the period with other known ice ages. In 2009, the International Union of Geological Sciences established the start of the Pleistocene Epoch at 1.806 million years before the present.

While scientists haven’t been able to determine the exact causes of an epoch, changes in ocean current, composition of the atmosphere, changes in the position of the Earth in relation to the sun are believed to be key contributors.

There were winters and summers during that period. The variation in temperatures produced glacial advances, because the cooler summers didn’t completely melt the snow.

Life during the Ice Age

While Homo sapiens evolved, many vertebrates, especially large mammals, succumbed to the harsh climate conditions of this period.

One of the richest sources of information about life in the Pleistocene Epoch can be found in the La Brea Tar Pits in Los Angeles, where remains of everything from insects to plant life to animals were preserved, including a partial skeleton of a female human and a nearly complete woolly mammoth.

In addition to the woolly mammoth, mammals such as saber-toothed cats (Smilodon), giant ground sloths (Megatherium) and mastodons roamed the Earth during this period. Other mammals that thrived during this period include moonrats, tenrecs (hedgehog-like creatures) and macrauchenia (similar to a llamas and camels).

Although many vertebrates became extinct during this period, mammals that are familiar to us today — including apes, cattle, deer, rabbits, kangaroos, wallabies, bears, and members of the canine and feline families — could be found during this time.

Birds flourished during this period, including members of the duck, geese, hawk and eagle families. There were also some flightless birds such as ostriches, rheas and moas. The flightless birds did not fare as well, as they had to compete with mammals and other creatures for limited supplies of food and water, as a good portion of the water was frozen.

Crocodiles, lizards, turtles, pythons and other reptiles also thrived during this period.

As for vegetation, it was fairly limited in many areas. There were some scattered conifers, including pines, cypress and yews, along with some broadleaf trees such as beeches and oaks. On the ground, there were prairie grasses as well as members of the lilly, orchid and rose families.

About 13,000 years ago, more than three-fourths of the large Ice Age animals, including woolly mammoths, mastodons, saber-toothed tigers and giant bears, died out.  Scientists have debated for years over the cause of the extinction, with both of the major hypotheses — human overhunting and climate change — insufficient to account for the mega die-off.

Recent research suggests that an extraterrestrial object, possibly a comet, about 3 miles wide, may have exploded over southern Canada, nearly wiping out an ancient Stone Age culture as well as megafauna like mastodons and mammoths.

Welcome to Pleistocene Park: The Mammoth Plan to Recreate an Ice Age Ecosystem in Siberia

The Pleistocene Park project is aiming to rebuild a lost...

Everything You Need To Know About ‘Jurassic Park’

The fossils are estimated to be around 96...

From track sites where you can walk the same...