The SA Mint will launch two new Big 5 designs this year and one of its new coins will feature a tiny dinosaur.

According to the Chinese horoscope, 2020 is The Year of the Metal Rat and is considered a year of new beginnings and renewals. The mint has embraced this fully and will renew its prized collectable coins and the iconic Krugerrand, it said in a statement.

The new Big 5 designs will feature the rhino and leopard. The Big 5 series was introduced last year at the 2019 World Money Fair. Previous coins in this series featured the lion and the elephant.

The fine silver Natura coin was a huge hit in 2019 and will be repeated this year, exclusively in silver. The 2020 series features the Coelophysis rhodesiensis, a diminutive dinosaur that lived approximately 188 million years ago. 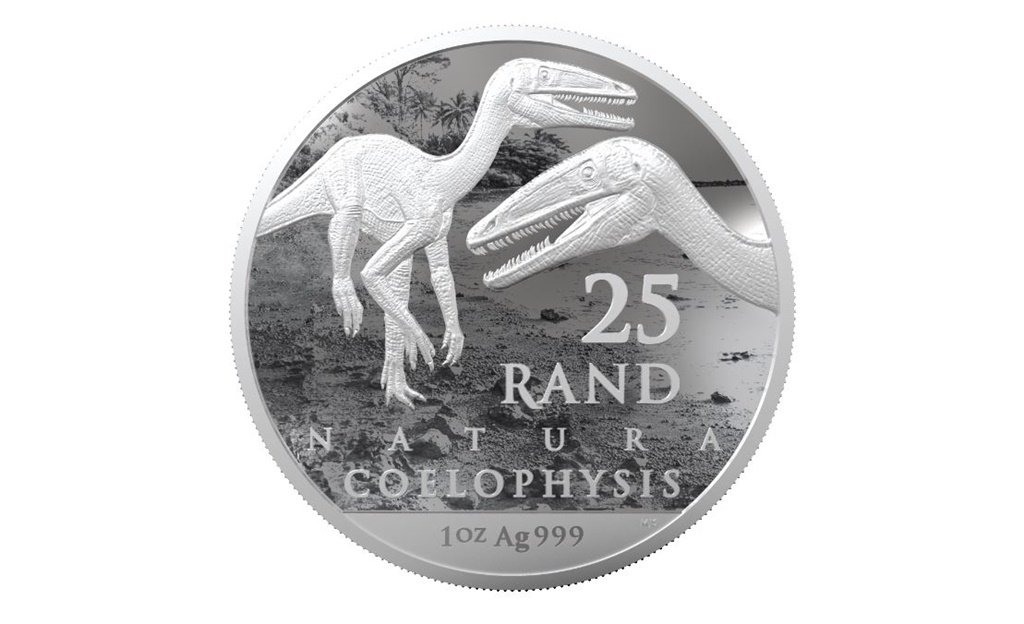 The new R2 coin will enter circulation later this year. The coin is the product of a competition which ran in 2019, following the launch of the “25 Years of SA’s Constitutional Democracy” series. The mint invited members of the public to submit designs for the reverse of the new R2 coin, depicting a right from South Africa’s Bill of Rights.

Numismatists will also be able to add the new sterling silver and tickey coins to their collection. The coins feature the Retinal cryoprobe, invented by a South African doctor. The pen-like instrument revolutionised cataract surgery.

The R2 crown features the anatomy of an eye on the reverse, while the tickey shows a gloved hand holding the retinal cryoprobe. When the 2.5c tickey is placed on top of the crown in the designated area, the surgical procedure is recreated.

The “South African Inventions” theme was introduced on the crown and tickey coins in 2016, to highlight globally relevant local ingenuity. Last year’s coin featured Pratley Putty. Invented by South African engineer George Pratley, it was the world’s first epoxy adhesive, and was even used by NASA for its craft 50 years ago.

The design of the Krugerrand, featuring the bust of President Paul Kruger on the obverse and a prancing springbok on the reverse, has remained unchanged over the last 50 years. The iconic Krugerrand in 2020 stars individually, as well as in the existing four and five fractional sets available. It is also available in 1oz and 2oz both gold and silver and in bullion and proof quality.

Fossils of ancient arthropods discovered in...

A museum in Brabant is to be the first in...

A new study by a former University of...

A team of researchers said Wednesday that a fossilized non-avian dinosaur egg, discovered in western Japan in a stratum dating back...

The cervical rib of a long-necked dinosaur from northwest China provides the oldest known evidence to date that early mammals fed on...

After a months-long delay, Sam Neill will finally get to suit up for...

A collaboration led by the Royal Ontario Museum (ROM) and McMaster University has led to the discovery and diagnosis of an aggressive...

Jurassic Park: What Happened To The Girl At The Start Of The Lost World

Young Cathy (Camilla Belle) has a terrifying encounter with some Compys at the start of...

The Famous Google Dinosaur is Hidden in Android in QR Codes

Google Chrome adds a new function with its latest version that generates QR codes decorated with the popular dinosaur....

Samuel L. Jackson had a small but memorable role In Jurassic Park. Here's what became of his character, the chain-smoking chief...

A new genus and species of owl that lived 55 million years ago (...