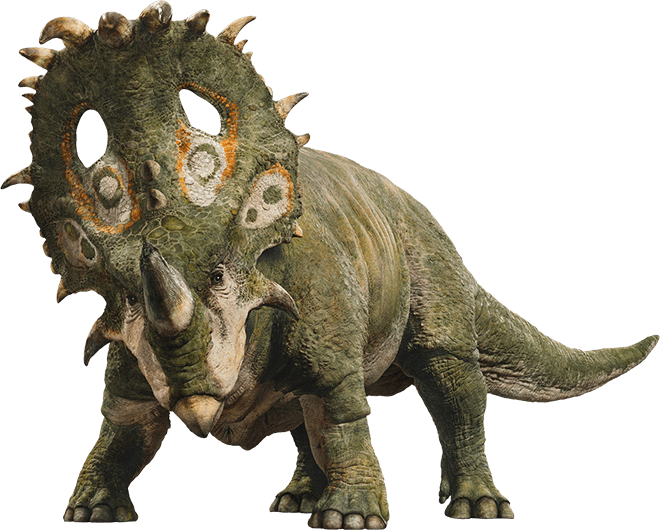 Sinoceratops is a genus of ceratopsian dinosaur that lived approximately 72 to 66 million years ago during the latter part of the Cretaceous Period in what is now Shandong province in China. It was named in 2010 by Xu Xing et al. for three skulls from Zhucheng, China. The name of its type species Sinoceratops zhuchengensis means "Chinese horned face from Zhucheng", after the location of its discovery.

Sinoceratops was a medium-sized, averagely-built, ground-dwelling, quadrupedal herbivore. It could grow up to an estimated 6 m (19.7 ft) length and 2 metres (6.6 ft) height, and weigh up to 2 tonnes (2.0 long tons; 2.2 short tons). It was the first ceratopsid dinosaur discovered in China, and the only ceratopsid known from Asia. All other centrosaurines, and all chasmosaurines, are known from fossils discovered in North America, except for possibly Turanoceratops. Sinoceratops is also significant because it is one of the largest known centrosaurines, and is much larger than any other known basal members of this group.

Sinoceratops was a larger ceratopsian ornithischian, with an estimated length of about 6 metres (19.7 ft), weight of 2 tonnes (2.0 long tons; 2.2 short tons), and height of about 2 metres (6.6 ft). Thomas R. Holtz Jr. estimated its length at 7 metres (23 ft) and weight at 2.3 tonnes (2.3 long tons; 2.5 short tons), the weight of a rhinoceros. It has a short, hooked horn on its nose (called a nasal horn), no horns above its eyes (brow horns), and a short neck frill with a series of forward-curving hornlets that gave the frill a crown-like appearance. Inside this row of hornlets there is a series of low knobs on the top of the frill, which are not seen in any other horned dinosaur. Sinoceratops is a member of the short-frilled ceratopsids, the Centrosaurinae. Holotype specimen ZCDM V0010 consists of a partial skull with most elements of the skull roof and partial braincase. The skull of Sinoceratops is estimated to be 180 cm (5.9 ft) long making it one of the largest known centrosaurine skulls.

The holotype specimen ZCDM V0010, consisting of a partial skull, including a braincase, was in the summer of 2008 recovered at the Xingezhuang Formation of the Wangshi Groupin Shandong, China. The specimen was collected in fluvial sediments that were deposited during the Campanian-Maastrichtian stages of the Cretaceous period, approximately 72–66 million years ago. Two other specimens have been recovered from the same formation. Specimen ZCDM V0011 is a partial skull that consists of the skull roof and most of the braincase, and ZCDM V0012 represents a partial braincase.

Sinoceratops was assigned to the taxon Centrosaurinae, as a basal member by Xu et al. (2010) based on characteristics present in the skull. Sinoceratops bears several characteristics that resemble features in chasmosaurines, blurring the distinction between the Centrosaurinae and Chasmosaurinae. According to Xu e.a. the basal position of Sinoceratops indicates that ceratopids originated in Asia. Sinoceratops however, shares a number of features with advanced centrosaurines such as Centrosaurus and Styracosaurus that are not seen in primitive centrosaurines like Diabloceratops, including a well-developed nose horn and reduced brow horns. The implication might be that this genus represents a lineage that invaded Asia from North America through Beringia.

Sinoceratops is known from the Xingezhuang Formation of southern China. It is known from skull material. Alongside it, in the formation, lived Shantungosaurus, a very common hadrosaurid to which most of the material has been assigned, Zhuchengtyrannus, an Asian tyrannosaurid related to Tarbosaurus, Zhuchengceratops, an Asian leptoceratopsid, and Huaxiaosaurus, a possible older individual of Shantungosaurus. Other possible remains have been assigned to Zhuchengosaurus, a probable junior synonym of Shantungosaurus, and material tentatively assigned to Tyrannosaurus.