Zhuchengtyrannus (meaning “Zhucheng tyrant”) is a genus of large carnivorous theropod dinosaur known from the Late Cretaceous period of Shandong Province, China. It is a tyrannosaurine tyrannosaurid, and contains a single species, Zhuchengtyrannus magnus.

Zhuchengtyrannus was first described and named by David W. E. Hone, Kebai Wang, Corwin Sullivan, Xijin Zhao, Shuqing Chen, Dunjin Li, Shuan Ji, Qiang Ji and Xing Xu in 2011 and the type species is Zhuchengtyrannus magnus. The generic name is derived from the word Zhucheng, which refers to the type locality, and tyrant in reference to its phylogenetic position as a tyrannosaurid. The specific name magnus meaning “great” in Latin refers to the relatively large size of Zhuchengtyrannus.

Zhuchengtyrannus is known solely from the holotype ZCDM V0031, a nearly complete right maxilla and associated left dentary (lower jaw, both with teeth) housed at Zhucheng Dinosaur Museum. Casts of the holotype, IVPP FV 1794, are held at the Institute of Vertebrate Paleontology and Paleoanthropology. ZCDM V0031 was collected in situ from the Wangshi Group at Zangjiazhuang quarry, Zhucheng City, dating to the Campanian stage, at least 73.5 million years ago. A second tyrannosaurid dentary (ZCDM V0030) and maxilla (ZCDM V0032) have also been collected at Zangjiazhuang quarry. Even though they were not associated with one another, both specimens are different from other tyrannosaurids, including Zhuchengtyrannus, implying the existence of at least one additional tyrannosaurid from the quarry. Apart from the tyrannosaurid material, specimens of Sinoceratops, hadrosaurids (probably Shantungosaurus) and ankylosaurs were recovered from it. Zhuchengtyrannus was found in an area that was a floodplain in the Cretaceous period and contains one of the highest concentrations of dinosaur bones in the world.

It is one of the largest known carnivorous theropods, and the holotype has been estimated to have been 10–12 m (33–39 ft) in length and up to 6 short tons (5.4 t) in weight. The holotype dentary is slightly smaller than that of most specimens of Tyrannosaurus rex and slightly bigger than most of Tarbosaurus bataar, but significantly smaller than the corresponding bones of the largest Tyrannosaurus specimen (“Sue”). 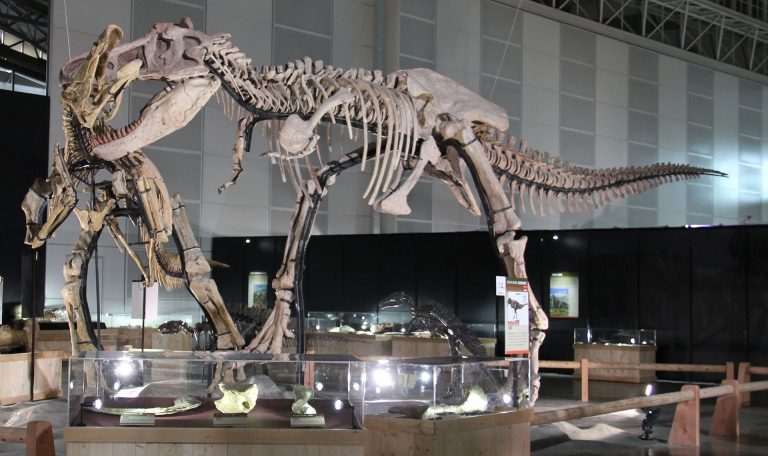 It is possible that several isolated teeth from one of the Zhucheng dinosaur quarries, previously given the name Tyrannosaurus zhuchengensis, belong to this or a related species. The T. zhuchengensis teeth are characterized by serrations that extend all the way to the base of the tooth crown, a feature not seen in any other tyrannosaurine species. All known teeth of Zhuchengtyrannus are too poorly preserved in this area to compare with T. zhuchengensis, but further finds may clarify their relationship.

A phylogenetic analysis published with the description of the tyrannosaurine Lythronax in the journal PLOS ONE recovered Zhuchengtyrannus as the sister taxon of Tarbosaurus. It also suggests that Zhuchengtyrannus and other currently known Asian tyrannosaurids were part of an evolutionary radiation descending from the same North American stem that later gave rise to Tyrannosaurus, recovered as their closest known relative. Below is a cladogram by Loewen et al. in 2013. 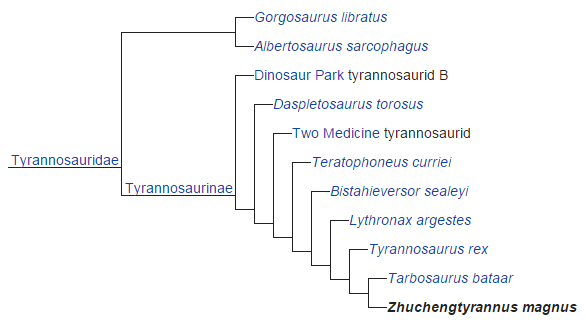 18mn yo Asexual Worm Could Unlock Secrets of Cloning Humans

Scientists have revealed how an ...

The latest addition to the family tree of...

Last Population of Homo erectus Survived in Central Java until 108,000 Years Ago

An international team of researchers has...

How To Sell Dinosaurs In Jurassic World Evolution

There are thousands of dinosaur-loving...

Paleontology is Sexy! A Selection of Recent Discoveries

Study Sheds New Light on the Behaviour of Spinosaurus

What Happened To Camp Cretaceous' Kids After Jurassic World? Every Theory

Before the dinosaurs bring down the house (...