The Geological Time Scale: Timeline of Life on Earth 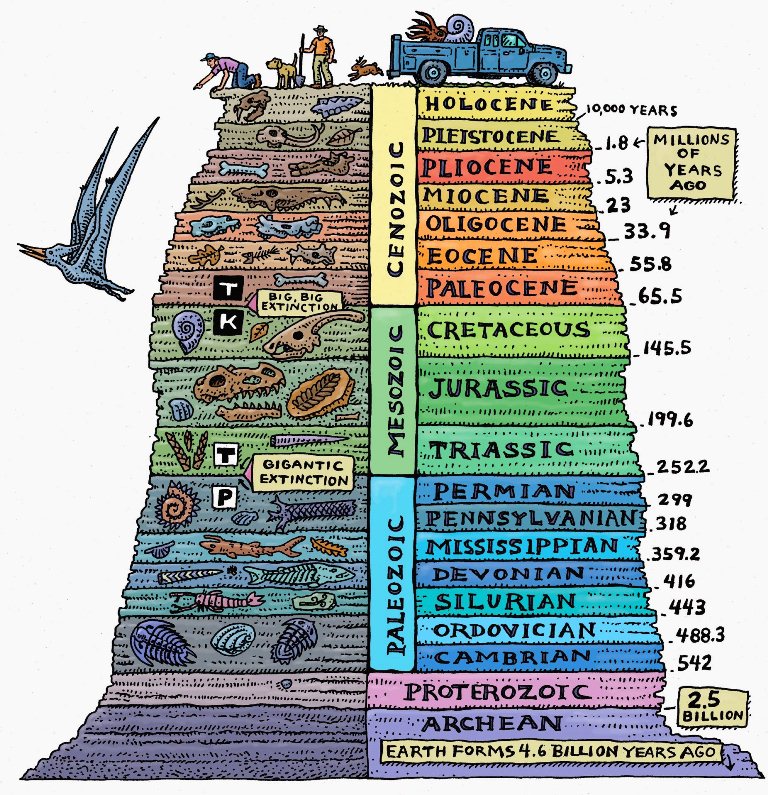 One evidence is rock layers specifically, what is called the geologic column. Basically, scientists have learned that rocks are stacked in layers containing fossils with the oldest fossils at the deepest layers, and the youngest, or most recent fossils, near the top. It’s as if rock layers are a vertical timeline. At the bottom of the timeline there are no fossils of modern animals. As you move towards the surface, you find fish, then amphibians, then reptiles, mammals, birds, and finally modern mammals including humans.

We’re not talking about an abstract diagram: this is the actual record of the earth’s crust, recorded in rocks around the world.

But how do we know this evolutionary sequence of layers, one on top of the other, is accurate? Why is there any order at all to rock layers?

Two laws, or principles of geology explain why rock layers are formed in this way.

THE LAW OF ORIGINAL HORIZONTALITY

This law of science tells us that dirt, mud, sand and other sediments are almost always deposited in horizontal layers. As these sediments stack up vertically, they often harden, forming rock layers.

THE LAW OF SUPERPOSITION

There are thousands upon thousands of layers in the earth’s crust. However, scientists have grouped the layers into major groups. The most recent three layers are the Paleozoic, Mesozoic, and Cenozoic. These layers represent the last 500 million years of life on earth.

In the Paleozoic, you find fish, amphibian, and reptile fossils (in that order), but never dinosaurs, birds, modern mammals, or even flowering plants.

Think of that: despite the billions of plant fossils in the Paleozoic layer, nobody has ever found one fossil of a flower, including any kind of deciduous tree or even a single blade of grass. Why not? The obvious explaination is flowers had not evolved yet.

The next layer, the Mesozoic, is often called the age of dinosaurs. The Mesozoic has dinosaurs like crazy. Of course, dinosaurs are reptiles and that’s why you won’t find any until after the Paleozoic which contains the first reptiles. The Mesozoic also has the first flowering plants, birds, and mammals, though few if any birds or mammals that we know of today.

On top of the Paleozoic and Mesozoic is the Cenozoic. This is the current layer that is still being deposited in oceans, deserts and swamps all around the earth today. The Cenozoic is the first major layer where we find modern mammal fossils like cats, dogs, monkeys and humans. This layer, or “era” is often referred to as the age of mammals.

These three layers make up a sort of 3-layer cake. Just like a cake, the bottom layer went down first, followed by the middle and the top. Since fossils progress from fish at the bottom to humans at the top, we have clear evidence that life evolved through time.

Of course, there isn’t one place in the world to go and see every fossil animal from all time stacked one on top of the other. In fact, it’s rare to find all three major layers on top of one another. Why not?

Well the first obvious answer is that even in the world today there are places where sediments (layers) are deposited but in other places (like mountains) they are eroded. So gaps are a common occurrence in many regions.

Also, while the layers are usually deposited in a clear order, those layers are often disturbed later on by volcanoes, rivers, mountains, and shifting continents.

Look at the diagram at right. If you were to stand on the cliff to the left side of the cross section, you would see the top layer in two places. The cracks, or faults, in the rock have slid the layers out of alignment. Only when you view the entire area can you piece the original order back together.

The crust of the earth is made of several huge plates. These plates “float” on the hot, soft mantle below the crust. We can actually measure the movement of the plates using satellites in space. Every year, they shift in different directions, each on their own path. Sometimes the plates collide, causing mountains. Other times, they separate and hot magma flows up to form volcanic islands and new land. It happens slowly but surely and as it does, our nice three layer cake becomes a little messier.

It’s as if somebody slid the cake off the table, and the dog ate half of it before dad comes to the rescue. Look at any one spot and you might not find all three layers in the right order, but look at the big picture and the original order is still visible.

There are many evidences of evolution, but the geologic column remains the most obvious clue to the history of life on earth.

A team of paleontologists from the...

A fossil of a skunk-like mammal that lived...

The largest skin impression ever found a on...

Everything We Know About The Original Jurassic Park 4 Script

Jurassic World is the fourth...

New research reveals that a well-preserved...