Giant Ammonites Once Thrived on Both Sides of Atlantic | Paleontology World

Giant Ammonites Once Thrived on Both Sides of Atlantic 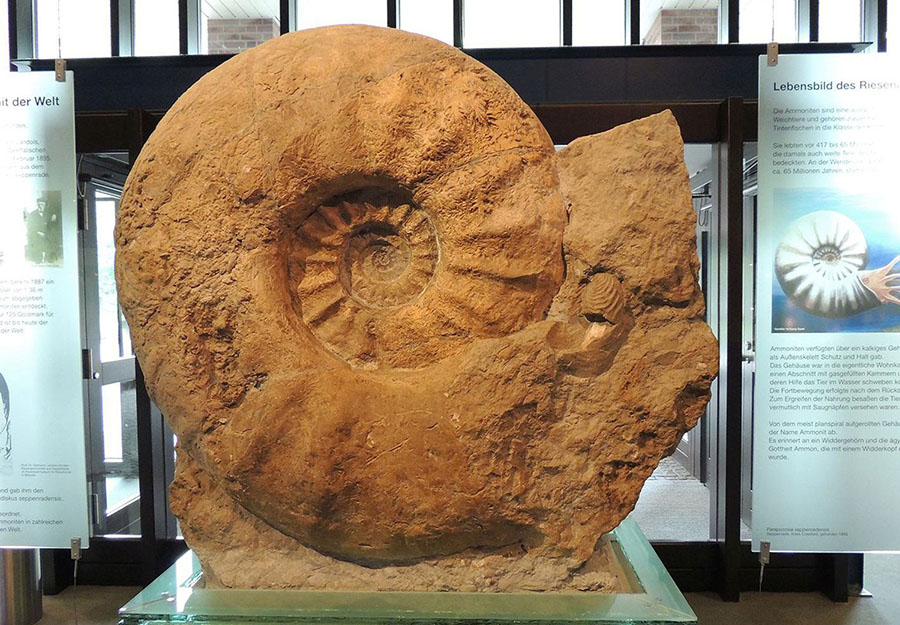 Enormous ammonites up to 1.8 m (6 feet) across lived on both sides of the Atlantic, in the United Kingdom and Mexico, some 83 million years ago (Cretaceous period), according to new research led by the University of Portsmouth.

University of Portsmouth’s Professor Andy Gale and colleagues studied the fossilized shells of 154 giant ammonites found in the Cretaceous rocks in Germany, Mexico and the United Kingdom.

“These enormous, long extinct, shelled cephalopods, related to squid and octopus, achieved a maximum shell diameter of 1.8 m and are best known from a specimen in the Munster Natural History Museum in Germany,” Professor Gale said.

“They were wiped out by the same end-Cretaceous meteorite impact 66 million years ago which did for the dinosaurs.”

“Fossil finds of the species are extremely rare, so little is know about them,” he added.

“But because we found so many in Sussex, we can start piecing together the sequence of their evolution.”

Of the 154 fossils examined, 110 were found on the beaches in Sussex or in Mexico.

From these, the paleontologists were able to determine the species thrived 83 million years ago and grew enormous.

Because the fossils were found in clusters, they believe the ammonites died and sank after reproducing, which they did only once in their lifetime.

“This giant species is commonly found in the chalk on the foreshore at Peacehaven in East Sussex, where erosion by the sea has exposed moulds of the shells,” Professor Gale said.

“The largest specimens are females, which probably spawned once and subsequently died.”

“The chambered shells were buoyant, and floated in the Chalk Sea for a long time before finally sinking to the bottom, where they have been preserved for millions of years.”

The team’s work will be published in the journal PLoS ONE.