Dinosaurs: How Long Did They Live? | Paleontology World

Dinosaurs: How Long Did They Live? 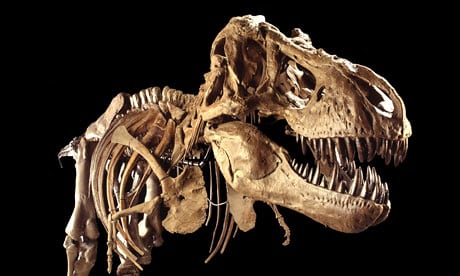 Carnivores may have lived to 30 years, herbivores far longer.

It isn't easy to tell from dinosaurs' fossilised remains how long they lived. "Traditional" estimates based on slow, reptilian growth rates, combined with the enormous size of dinosaurs, led scientists to conclude it could be up to several hundred years. However, palaeontologists today believe that dinosaurs grew much more quickly, rather like birds and mammals.

Dinosaur bones grew like those of other vertebrates, by adding new bone matter to the outside of the bone. Because of annual variation in temperature or the availability of food, periodically bone growth would slow down, and a thin layer of avascular bone would form a ring or "growth line" in much the same way that tree trunks do. By taking thin slices of bones, these rings can be viewed under a polarised light source. Counting the rings can give an idea of the dinosaur's age at death.

Growth lines in dinosaur bones were first observed in 1983 in the study of Late Jurassic sauropod bones called Bothriospondylus, possibly from the herbivorous brachiosaur family, which was discovered more than a century earlier. The study caused estimates of its age to be revised, and it is now reckoned to have died at the age of 43, when only half way to attaining its full adult length of 15-20 metres.

According to Dr John Nudds, a palaeontologist at the University of Manchester: "If you compare dinosaurs to present-day animals, we might expect that the very large herbivores - things like brachiosaurs and Diplodocus, which were comparable in size to an elephant - would have lived, therefore, for 70-80 years; maybe a bit more. Whereas the smaller, meat-eating dinosaurs would have been more comparable to some of today's larger birds, to which they are closely related. If you think of something like an eagle or raven, they live for 20-30 years, and that would probably have been the lifespan of a T. rex."

The largest and best-preserved T. rex, in the Field Museum of Chicago, is thought to have lived to almost 29 years, although it would have achieved adult size after 20 years. "Sue" is 12 metres long from head to tail, and estimated to have weighed around seven tonnes, underlining the rapid growth rate of such dinosaurs during their (relatively) short lives.

The growth lines also offer a guide to a dinosaur's growth rate at different stages of its life. It is now understood that most dinosaurs grew for a large part of their lives, with a particularly rapid spurt during adolescence.

In the late 1990s, two adult and one juvenile Camarasaurus specimens were found together in the United States, indicating that these sauropods travelled in family groups and possibly herds. It is thought that some dinosaurs may have migrated significant distances, notably those living near the Earth's poles, where food supplies were seasonal. Suggestions of how far they travelled vary, but one recent study estimated large sauropods might have made an 1,800-mile round trip each year.

Paleontologists: Giant Prehistoric Animals Were Wiped Out By People

How Dinosaur Fossils Were Formed?

Was there any real proof that dinosaurs...

As the coronavirus pandemic continues to...

Biological anthropologists from The...