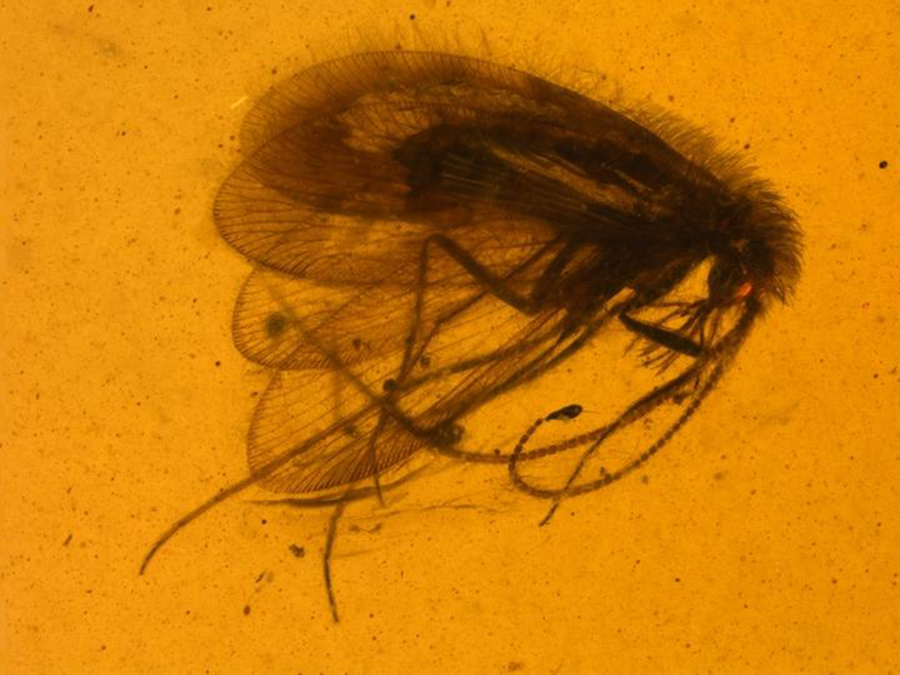 A team of paleontologists from the Borissiak Paleontological Institute of Russian Academy of Sciences (Moscow) discovered four new species of extinct insects with sucking mouthparts in mid-Cretaceous Burmese amber. Researchers believe that they visited first angiosperm flowers, but eventually went extinct due to the inefficient design of the proboscis. According to the research, Paradoxosisyrinae, the group to which these creatures belong, is a kind of «Nature's failed experiment». The results of the study are published in the Cretaceous Research journal.

In recent years, Burmese amber makes headlines as a source of dinosaur remains, toothed birds and other incredible vertebrate findings. However, insects found there are often no less bizarre. This is especially true for Paradoxosisyrinae, a subfamily of Sisyridae, or spongeflies, which was described from Burmese amber based on a single specimen in 2016. Neither living spongeflies nor any of their extant relatives from insect order Neuroptera, such as green lacewings and ant lions, have sucking mouthparts. In contrast, members of Paradoxosisyrinae were equipped with a well-developed proboscis -- which is a paradox indeed, as their name suggests.

Until now, functions of Paradoxosisyrinae's proboscis have remained unclear. It was hypothesized that Paradoxosisyrinae used their elongated mouthparts for piercing insect cuticle or frog skin. Contrary to this, the new research based on newly available specimens shows that in all probability these insects were not predators or bloodsuckers -- instead, they were harmless nectar feeders. Scientists said that Paradoxosisyrinae simply could not pierce any dense substrates because of loosely coupled arrangement of the mouthparts, devoid of a supportive sheath, and the presence of long hairs at the mouthpart tips.

With the help of microscope examination and virtual 3D-models scientists came to a conclusion that proboscis of Paradoxosisyrinae, rather than having a common food canal, consists of two independent straws or tubes, each one formed by two halves loosely joined together without any special devices suitable to lock them tightly. Since Paradoxosisyrinae could not seal their proboscis to produce a pressure gradient, as modern flies and moths do, they had to rely exclusively on capillary forces for nectar uptake, while other nectar feeders use also the muscular sucking pump. All this means that the proboscis of Paradoxosisyrinae, less than 1 mm in length, destined to be short forever, which undercut their ability to draw nectar from flowers with deep corolla tubes.

«These insects were a nature"s unsuccessful attempt to make nectar feeding insects in response to the rise of the flowering plants in the Early Cretaceous period. Soon they were outcompeted by bees, flies and other nectar feeders with more cleverly designed mouthparts», said Alexander Khramov, study"s leading author and a senior researcher at the Borissiak Paleontological Institute.

Discovery of four new species of Paradoxosisyrinae, in addition to the only previously known member of this subfamily, dramatically expands our knowledge about diversity of these extinct nectar feeders. One of the new species was named Buratina truncata after the long-nosed fiction character Buratino, the Russian analogue of Pinocchio. Body of Buratina truncata as well as of other newly described species was covered with dense hairs, the condition seen in modern pollinators, which allows them to carry pollen grains between plants. The researchers say that Paradoxosisyrinae could feed on small shallow flowers like Tropidogyne which are commonly occur in Burmese amber.