Pterosaurs Evolved Their Flight Ability over Millions of Years: Study 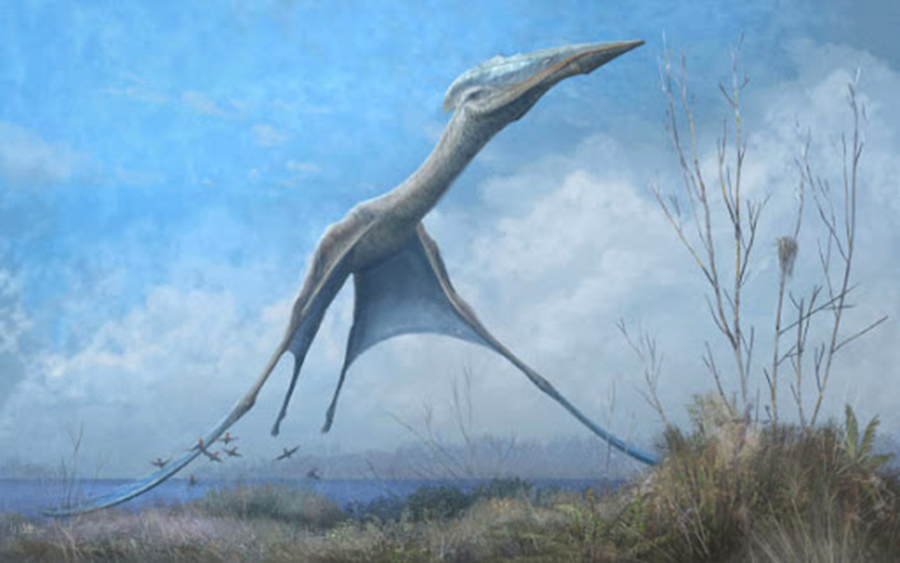 In a new study published this week in the journal Nature, a team of researchers from the United Kingdom combined fossil records with a new model of flight to measure flight efficiency in pterosaurs and fill in gaps in our knowledge of their evolutionary story. The scientists were able to track the gradual evolution of pterosaurs and demonstrate they became twice as good at flying over their 150 million-year existence. The authors also showed their evolution was caused by consistent small improvements over a long period, rather than sudden evolutionary bursts as had been previously suggested.

Pterosaurs were Earth’s first winged vertebrates, with birds and bats making their appearances much later.

They thrived from about 210 to 65 million years ago, when they were wiped out by the asteroid that also doomed the non-avian dinosaurs.

Some pterosaurs, such as the giant azhdarchids, were the largest flying animals of all time, with wingspans exceeding 9.1 m (30 feet) and standing heights comparable to modern giraffes.

Therefore, in the absence of proto-pterosaur fossils, it is difficult to study how flight first evolved in this group.

“Despite their eventual prowess in the air being well-known, the question of whether pterosaurs got better at flying, and whether this gave them an advantage over their ancestors, has puzzled scientists for decades,” said Professor Chris Venditti, an evolutionary biologist at the University of Reading.

“There are many examples of how natural selection works on relatively short time scales but, until now, it has been very difficult to demonstrate whether plants or animals adapt to become more efficient over a long period.”

“Our new method has allowed us to study long-term evolution in a completely new way and answer this question at last by comparing the creatures at different stages of their evolutionary sequence over many millions of years.”

Professor Venditti and colleagues monitored changes to pterosaur flight efficiency by using fossils to measure their wingspan and body size at different stages.

Their new model based on living birds was applied to the data for 75 pterosaur species, which showed that pterosaurs gradually got better at flying over millions of years.

The models showed that pterosaurs adapted their body shape and size, so they used 50% less energy when flying, over their 150 million-year history.

They showed the creatures increased in mass ten fold, with some eventually weighing more than 300 kg.

The new method also revealed that the azhdarchoid pterosaurs were an exception to the rule.

Paleontologists have disagreed over how well these animals flew, but the new study showed that they did not get any better throughout their existence.

The enlarged size of azhdarchoids appeared to provide their survival advantage instead, with one animal, Quetzalcoatlus, growing to the height of a giraffe.

“This is unique evidence that although these animals were competent fliers, they probably spent much of their time on the ground,” said Dr. Joanna Baker, an evolutionary biologist at the University of Reading.

“Highly efficient flight probably didn’t offer them much of an advantage, and our finding that they had smaller wings for their body size is in line with fossil evidence for their reduced reliance on flight.”

“Among the few things that haven’t changed over the last 300 million years are the laws of physics, so it has been great to use those laws to understand the evolution of flight in these amazing animals,” said Professor Stuart Humphries, a biophysicist at the University of Lincoln.

“Until recently, paleontologists could describe the anatomy of creatures based on their fossils and work out their functions,” said Professor Mike Benton, a paleontologist at the University of Bristol.

“It’s really exciting now to be able to calculate the operational efficiency of extinct animals, and then to compare them through their evolution to see how efficiency has changed.”

“We don’t just have to look at the fossils with amazement, but can really get to grips with what they tell us.”

Paleontologists in China have identified a...

5 Dinosaur Movies To Watch With Your Child

Kids are obsessed with dinosaurs! Here’s a...

How Do We Know Birds Are Dinosaurs?