Before humans, dinosaurs ruled the world, prowling the land, sea and air for around 165 million years. Here’s our pick of some of the best museums to see these spectacular creatures and spark your imagination, in no particular order… 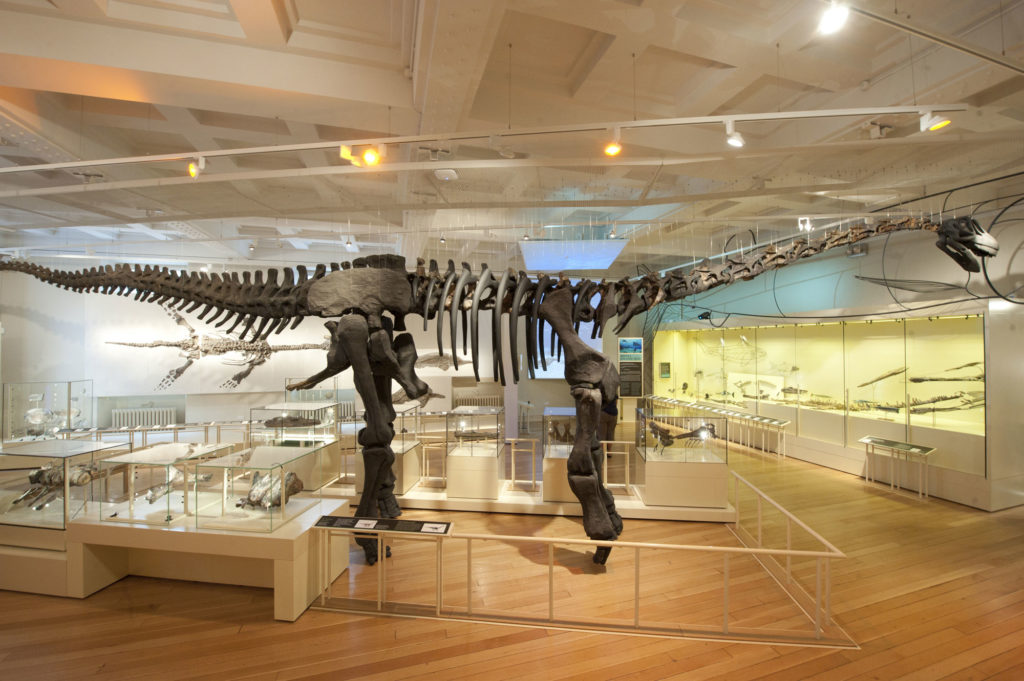 The impressive Rutland Dinosaur, a Cetiosaurus oxoniensis, takes centre stage at the New Walk’s famous Dinosaur Gallery which is also home to some of the oldest fossils in the world. Displays include the Plesiosaur, the giant fish and the 540 million-year-old Charnia fossil. There are also dinosaur interactives and cutting edge reconstructions of marine reptiles.

The Isle of Wight is one of the richest dinosaur locations in Europe, with more than 20 species from the Cretaceous period found on the island. The interactive Dinosaur Isle Museum has reconstructions of five local dinos; Neovenator, Eotyrannus, Iguanodon, Hypsilophodon and the giant sauropod. Displays use clever lighting, sounds, smells and animatronic technology to create an exciting and at times scary experience for visitors. They also lead very popular fossil walks throughout the year.

Housed in her former home, Lyme Regis Museum celebrates the pioneering fossil hunter and palaeontologist Mary Anning, who discovered the Ichthyosaur on the local beaches in 1811. The Geology Gallery contains a wealth of fossils and for the real thing you can join one of their famous fossil walks along a historic stretch of Dorset coast.

Stan the Tyrannosaurus rex is the towering centrepiece to this impressive palaeontology collection of more than 100,000 fossils. Search out the giant Plesiosaur and marvel at the massive fossil tree. The museum is home to dinosaurs, mummies and live animals and is an engaging place to visit to learn how our planet has changed over millions of years.

The terrifying animatronic T. rex and the one-of-kind Stegosaurus skeleton make the NHM a must-see museum for any dinosaur enthusiast. The museum is packed full of facts, figures, fossils, reconstructions and engaging interactives that explore an ever-developing knowledge of dinosaurs. 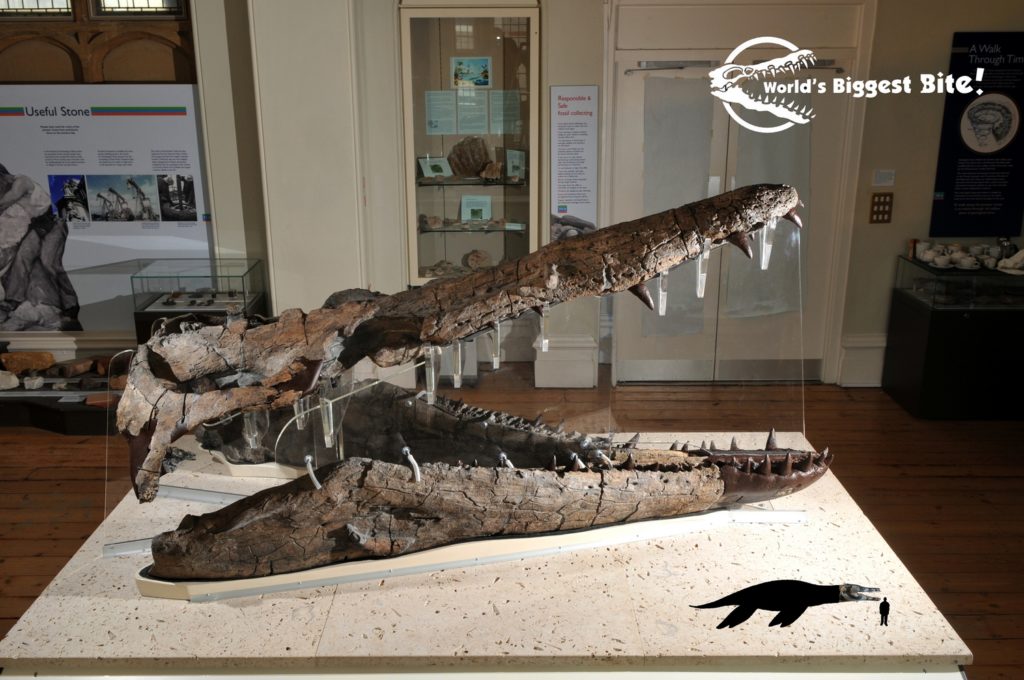 The Jurassic Coast Gallery is a walk through time charting 95 miles of coastline from Exmouth in Devon to Old Harry Rocks in Dorset. The giant jaws of a huge marine reptile are on display here, with a 2.4 metre long skull and razor-sharp teeth, the Weymouth Bay Pliosaur is aptly named ‘The World’s Biggest Bite’. 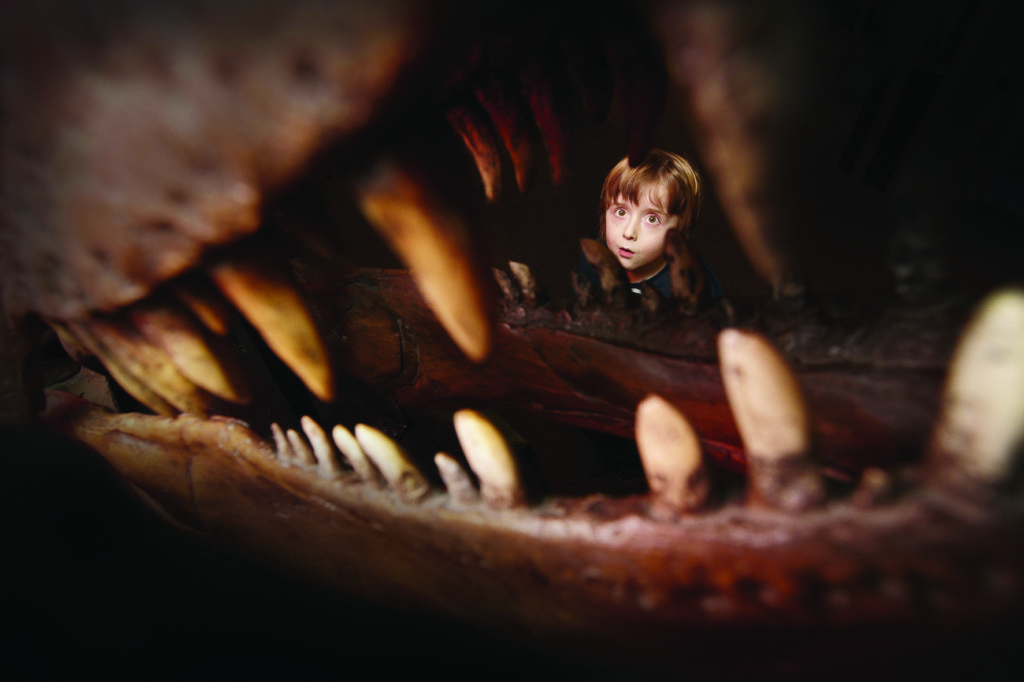 Just a couple minutes’ walk away, The Dinosaur Museum is devoted to the fascinating world of dinosaurs and is the perfect place for younger visitors. Life-size reconstructions and real fossils and dinosaur skeletons make for an exciting visit with hands-on displays that feature everything prehistoric.

Scarborough’s bastion of geology is a must-visit for anyone wanting to understand the dino-history of Yorkshire. The Dinosaur Coast Gallery offers a bright, colourful and resolutely family-friendly experience which explores the coastline and its treasures.

Lifesize casts of famous dinosaurs including a Megalosaurus and the fearsome Allosaurus await visitors to the Dinosaur Gallery of the World Museum in Liverpool. There are also fossilised reptile footprints, dinosaur poo and bones – and the occasional visit from a young T. rex. 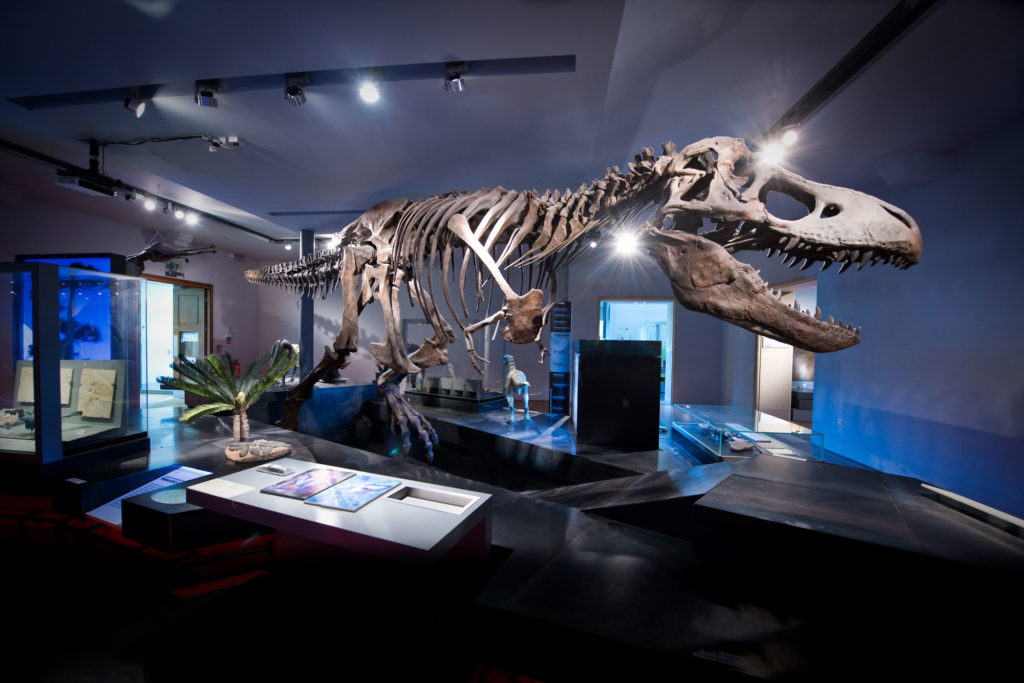 A full size T. rex skeleton in Fossil Stories makes this museum great for dinosaur enthusiasts. Have a go at being a palaeontologist by re-building prehistoric creatures and explore hundreds of exciting fossil plants and animals. 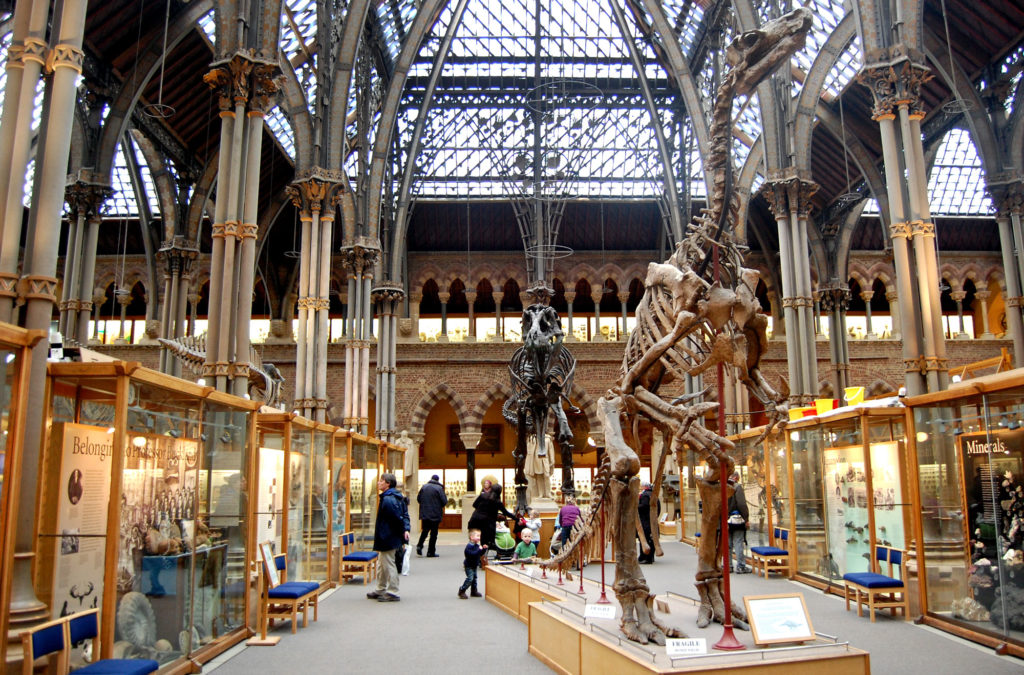 Visitors to Oxford University’s gothic-style natural history museum are greeted by the towering skeletons of an Iguanodon and T. rex, who guard the museum’s centre aisle. As well as these imposing specimens the museum is also home to four dinosaurs found within Oxfordshire – including two very rare complete skeletons – and a variety of other species of prehistoric reptiles. 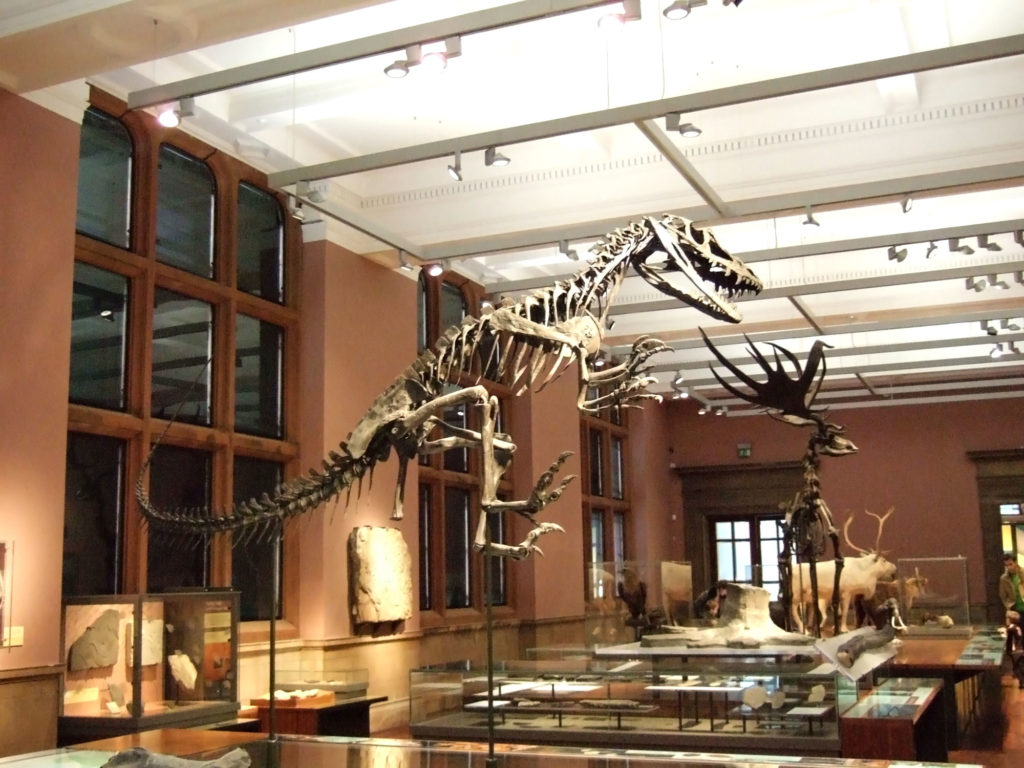 Amid the many wonders in this something-for-everyone museum is the Creatures of the Past Gallery, which puts the dinosaurs that once roamed Scotland into context. The museum has 8000 astonishing objects and dinosaur and fossil lovers will be pleased to know the collection includes a 2.6 metre skeleton of Stenopterygius, crocodilian remains and an almost complete shell of a Jurassic turtle. 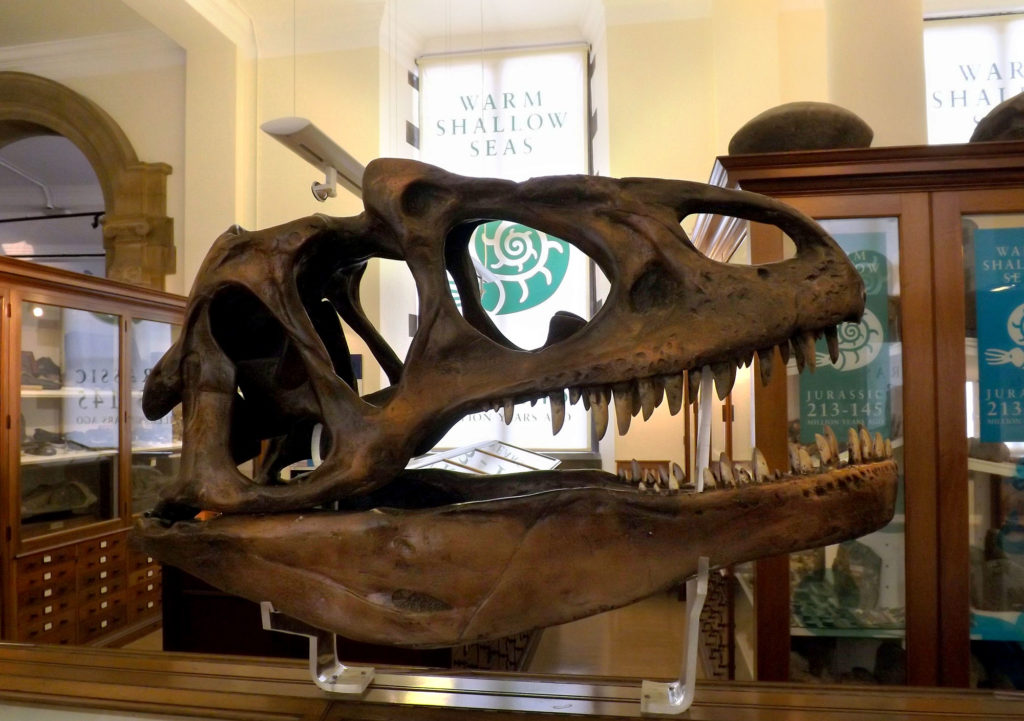 Iggy the enormous Iguanodon skeleton guards the entrance to this museum, which is home to 1.5 million fossil, rock and mineral specimens from around the world. Explore 12 different galleries from the Ice Age to the Cambrian period and journey more than 500 million years through the history of life on Earth.

A newly-discovered branch of the horse family has been...

New research reports on discovery of 5-...

The locals sold the fossil to scientists at...

Long-extinct relatives of today's dogs and...