The collection brings to life the ‘archosauria’, which comprise crocodiles, pterosaurs, dinosaurs and birds or the ruling reptiles that roamed and soared freely in Southern Africa about 200-million years ago.

Archosaurs are regarded as the direct ancestors of the dinosaurs and the fossil records from the Karoo Supergroup’s rocks hold the key to understanding their early evolutionary history.

The rise of the archosaurs and their evolution is a significant event in the history of life on land, since they not only led to the evolution of dinosaurs and birds, but also to the pterosaurs, commonly known as flying reptiles, and crocodiles.

Besides the Karoo, many discoveries have been made on the continent and in the country along the borders of KwaZulu-Natal, Free State, Eastern Cape, Western Cape and the Northern Cape. These finds have helped fill in critical gaps in the evolution of dinosaurs and provide fresh information on how the southern continents of Africa, South America and India separated, the South African Mint said in a statement.

The Mint further explained that the presence of these fossil records endorses the theory that the South African portion of what was the prehistoric supercontinent Gondwana, was an evolutionary hotspot 260-million years ago.

It also reinforces the idea that the distant ancestors of mammals actually came from South Africa, according to the statement.

“South Africa’s rich fossil heritage has been pivotal to unravelling the history of life on the planet. The fossil finds have turned out to hold a treasure trove of information on life some 200-million years ago. It is a privilege to bring this information to ardent fans of palaeontology on coins that will outlast life on earth,” South African Mint MD Tumi Tsehlo said. 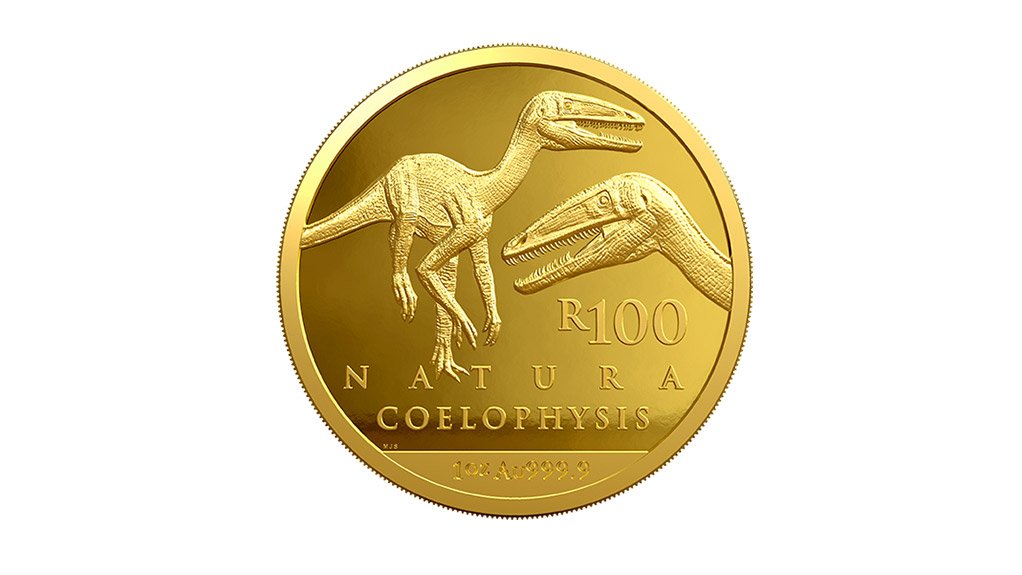 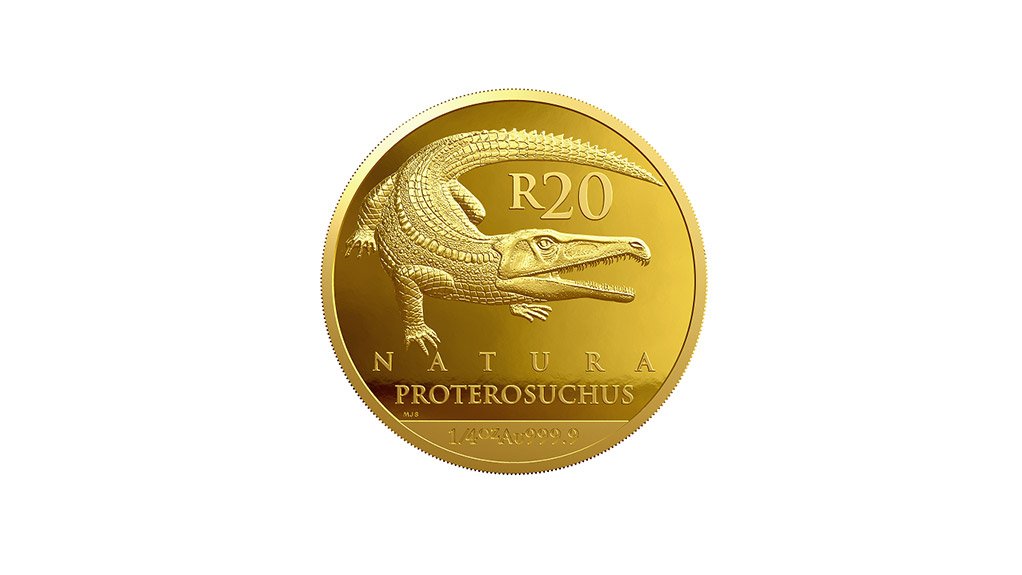 The 1 oz R100 coin, with a limited mintage of 1 000, features the Coelophysids, which were highly successful primitive theropod dinosaurs that lived on numerous continents from the late Triassic to early Jurassic periods. The small, agile bipedal dinosaur preyed on small animals and inhabited South Africa and Zimbabwe during the early part of the Jurassic period.

About 165-million years ago, the group of small, feathered dinosaurs that we call birds today evolved from within the theropod radiation.

Depicted on the 12 oz R50 coin is South Africa’s most famous find, the Massospondylus carinatus, one of the most recognised dinosaurs in the world. Massospondylus is a prosauropod dinosaur that lived in the early Jurassic period, which makes it one of the oldest dinosaurs on earth. Only 1 000 of these coins will be minted.

The Proterosuchidae – similar in form to the crocodile – features on the 14 oz R20 coin. The elongated snout of this creature resembles that of a crocodile or alligator which would suggest that it was a specialised fish-eater. Only 1 500 of these coins will be minted.

Erythrosuchidae, which will feature on the 1/20 oz R10 coin, were Archosauriforms from the late Triassic of South Africa and Namibia.

The Erythrosuchus africanus was about 5 m long and stood over 2 m tall, making it the largest predator of the time. The Erythrosuchus had an exceptionally large skull for its size, occupying about a fifth of its total body length. This creature walked on all fours with a semi-erect gait which would have enabled it to move more swiftly than other more primitive reptiles of the same size. Only 1 500 of these coins will be minted.

Depicted on the 1/20 oz R5 coin is the Euparkeria capensis, a reptile which lived about 235-million years ago during the Middle Triassic period. It was first discovered at the beginning of the twentieth century in South Africa.

Euparkeria was one of the first bipedal vertebrates with their legs longer than their arms, which suggests that they could move around quadropedally. Only 1 500 coins will be made available.

All the coins share a common obverse which depicts the fossilised skull, neck and shoulder of an Erythrosuchus africanus. The words ‘Rise of the dinosaurs’, ‘Archosauria’ and the year 2018 as roman numerals ‘MMXVIII’ complete the design.

Noted palaeontologist and zoologist Dr Francois Durand, from the University of Johannesburg, contributed to the design of the coins and it is his dinosaur renderings that appear on all the coins in the series.

“Given the limited mintage, the Rise of the Dinosaurs is an exceptional, once-in-a-lifetime acquisition for Afrophiles and those who wish to travel some 200-million years back in time. The coins’ chronological timeline from the early Jurassic period to late Triassic periods gives the collection continuity and should pique the interest of avid collectors,” Tsehlo averred.

“It is crucial to give this unique heritage the attention it deserves and what can be better than coins to preserve the history for posterity. Next year’s Palaeontology Collection will take this evolutionary process further.”

Collectors can also acquire the rare Prestige Set, which contains all five coins. Only 100 sets are being made available.

A team of paleontologists from the United...

The Motion Picture Association of...

Parkasaurus is a More Charming, Accessible Alternative to Jurassic World Evolution… With Hats

Save dinosaurs from extinction, one chicken...