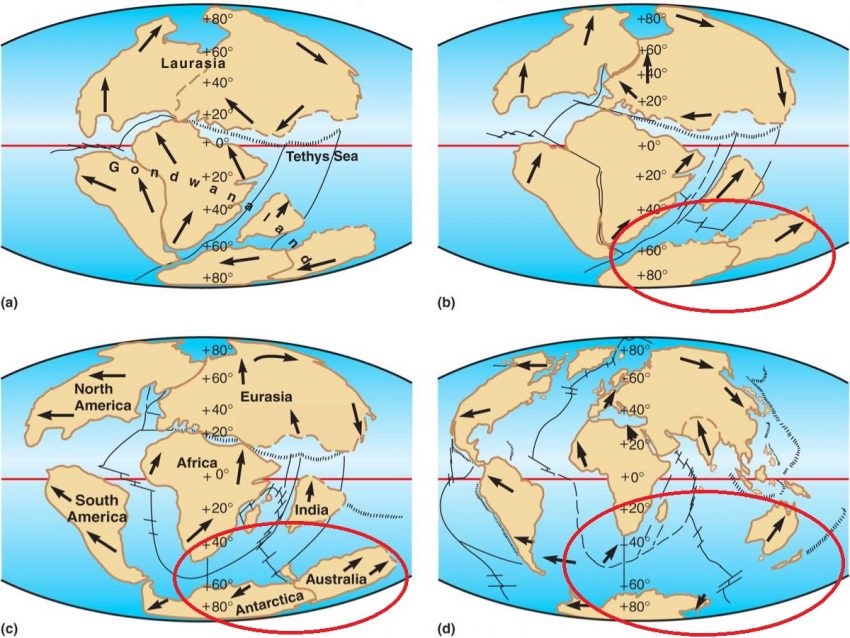 After the supercontinent Pangaea separated into the smaller supercontinents of Laurasia and Gondwana, evolution became dependent upon specific conditions of climate and habitat.

The dinosaur “collective” fragmented, leaving dinosaurs to evolve in isolated groups and develop traits distinctly different from their sundered cousins on other landmasses.

During the 19th century, naturalist Charles Darwin began speculating about the relationship between living and fossil species while developing his theory of natural selection and “descent with modification,” to explain why some species became extinct while others evolved.

But no one paid much attention to geology’s role in biological evolution until 1910, when geophysicist Alfred Wegener, curious about why identical plant and animal fossils were being found on separate continents, realized that the outline of the east coast of South America fit against the lower west coast of Africa like pieces in a massive jigsaw puzzle.

It was as if the two continents had once been joined — an insight later confirmed by modern geology.

Africa, the first landmass to separate from Gondwana, supported Cretaceous Period dinosaurs like Suchomimus, a three-ton, bipedal predator with a skull resembling a contemporary crocodile’s. It was also home to Nigersaurus, whose wide, flat, vacuum-cleaner-nozzle-shaped mouth was packed with 50 teeth each in its upper and lower jaws, making it perfect for gobbling low-growing plants. Each tooth position held nine replacement teeth, meaning that Nigersaurus replaced 80 to 100 teeth each month — without missing a single meal.

Meanwhile, in South America, Giganotosaurus roamed the badlands of what is now Argentina’s Patagonia region. Perhaps the largest land carnivore that ever lived, this 43-foot-long, 13,200-pound behemoth comes alive at the Denver Museum of Nature &amp; Science special exhibition “Ultimate Dinosaurs,” where visitors can manipulate special screens to see what a creature’s skin and facial coloration might have looked like in “real life.”