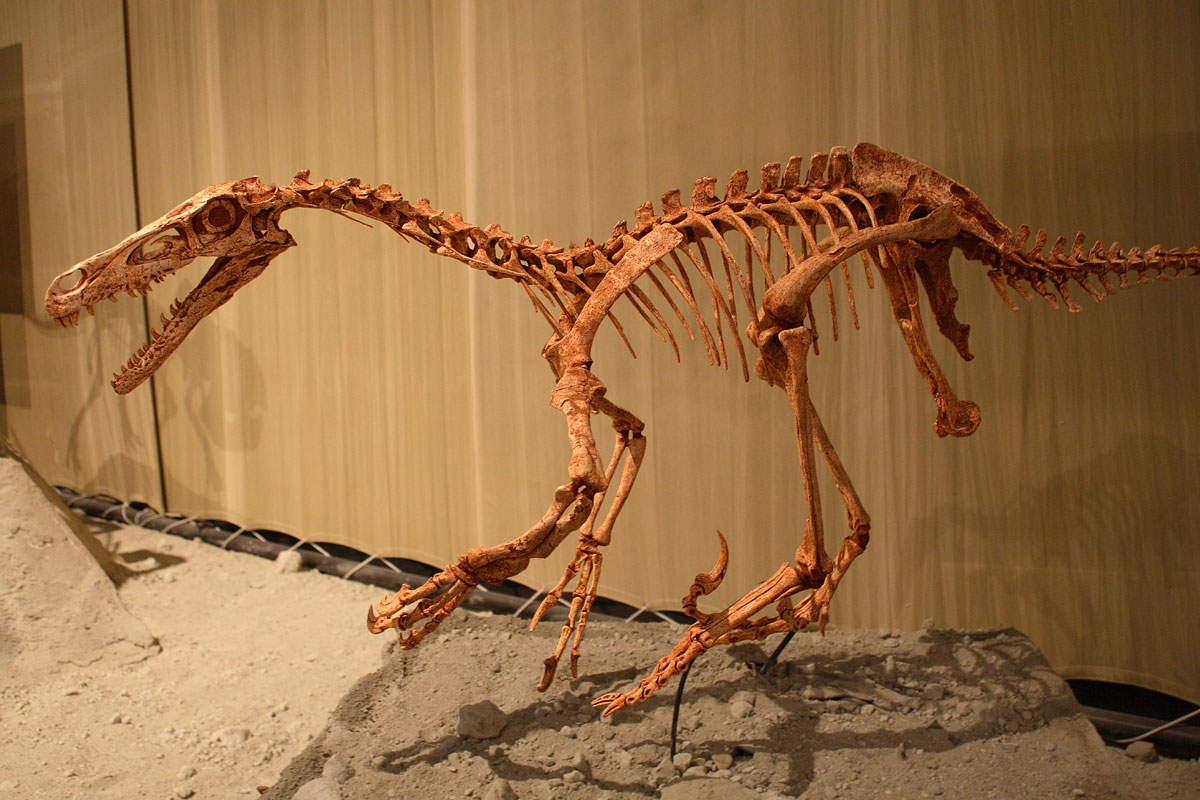 Velociraptor (meaning “swift seizer” in Latin) is a genus of dromaeosaurid theropod dinosaur that lived approximately 75 to 71 million years ago during the later part of the Cretaceous period. Two species are currently recognized, although others have been assigned in the past. The type species is V. mongoliensis; fossils of this species have been discovered in Mongolia. A second species, V. osmolskae, was named in 2008 for skull material from Inner Mongolia, China.

When first described in 1924, Velociraptor was placed in the family Megalosauridae, as was the case with most carnivorous dinosaurs at the time (Megalosauridae, like Megalosaurus, functioned as a sort of ‘wastebin’ taxon, where many unrelated species were grouped together). As dinosaur discoveries multiplied, Velociraptor was later recognized as a dromaeosaurid. All dromaeosaurids have also been referred to the family Archaeopterygidae by at least one author (which would, in effect, make Velociraptor a flightless bird).

Smaller than other dromaeosaurids like Deinonychus and Achillobator, Velociraptor nevertheless shared many of the same anatomical features. It was a bipedal, feathered carnivore with a long tail and an enlarged sickle-shaped claw on each hindfoot, which is thought to have been used to tackle prey. Velociraptor can be distinguished from other dromaeosaurids by its long and low skull, with an upturned snout.

Velociraptor (commonly shortened to “raptor”) is one of the dinosaur genera most familiar to the general public due to its prominent role in the Jurassic Park motion picture series. In real life, however, Velociraptor was roughly the size of a turkey, considerably smaller than the approximately 2 m (7 ft) tall 80 kg (180 lb) reptiles seen in the films. Today, Velociraptor is well known to paleontologists, with over a dozen described fossil skeletons, the most of any dromaeosaurid. One particularly famous specimen preserves a Velociraptor locked in combat with a Protoceratops.

Most important of all is the question of their size. The Velociraptor of the late Cretaceous was barely longer than 3 feet (1 m); in the movie, however, it was shown to be the size of a large adult human-and it looked all the more ferocious as a result.

It is interesting to note that while Jurassic Park was still being filmed, the remains of Utahraptor -a previously unknown dromaeosaurid, which was about the same size as those “faked” for the movie, were found in Wyoming. 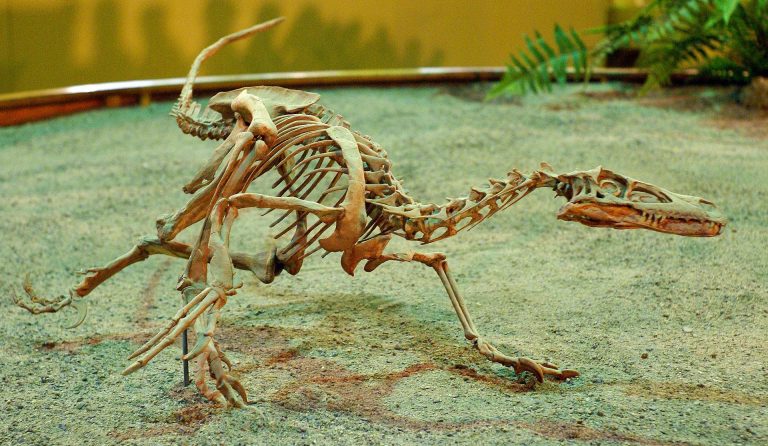 Fossils of dromaeosaurids more primitive than Velociraptor are known to have had feathers covering their bodies and fully developed feathered wings. The fact that the ancestors of Velociraptor were feathered and possibly capable of flight had long suggested to paleontologists that Velociraptor bore feathers as well, since even flightless birds today retain most of their feathers. In September 2007, researchers found quill knobs on the forearm of a Velociraptor found in Mongolia. These bumps on bird wing bones show where feathers anchor, and their presence on Velociraptor indicate it too had feathers.