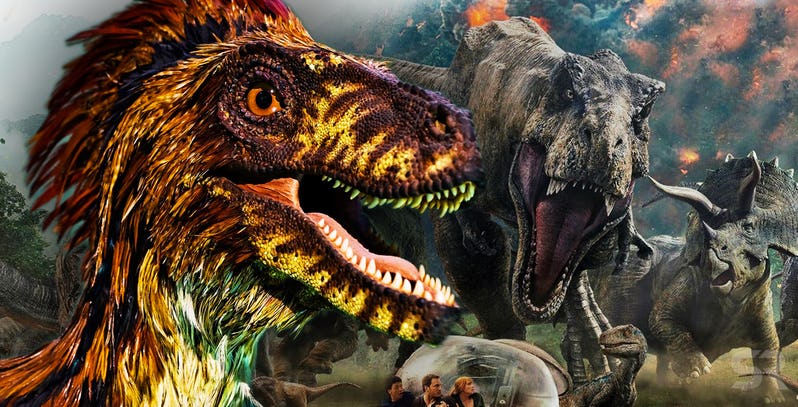 One question that remains about Jurassic Park is why the dinosaurs don't have feathers in any of the movies. The original sci-fi thriller directed by Steven Spielberg released in 1993, based on the popular novel by Michael Crichton.

Jurassic Park focused on a wildlife theme park constructed by the billionaire philanthropist John Hammond (Richard Attenborough). The park featured a number of dinosaurs that had been genetically created by a team of scientists in order to bring some of the species out of extinction. A group of visitors, including Hammond's grandkids, toured around the park before an act of sabotage caused the security system to go awry, putting everyone on the island in danger. Jurassic Park was an instant hit and spawned two sequels before the franchise was revived in 2015 with Jurassic World.

While regarded as one of the finest blockbusters ever, Jurassic Park has come under fire with criticism from expert paleontologists. They often point out inaccuracies centering on the movies' depiction of dinosaurs. When the first Jurassic Park film premiered, it was at the start in a major shift of the public understanding of dinosaurs, perhaps the biggest being the fact the creatures actually had feathers.

In recent decades, it has been determined that all species of dinosaurs had feathers, at least when they're at a young age. Even though the word "dinosaur" translates to "fearsome lizard" in Greek, the creatures didn't derive from reptiles, they are ancestors of birds. While the original Jurassic Park does acknowledge this evolving perspective, it and all of the succeeding films still went with the more classical versions of the creatures, much to the dismay of paleontologists. The reasoning most likely fell into the Hollywood blockbuster effect.

Many of the dinosaur species featured in Jurassic Park should have had feathers, including the velociraptors. It was believed that Spielberg and the creative minds behind the movie decided to avoid the feathers due to their plan to realize them via CGI. Developing animatronic dinosaurs that looked realistic was challenging enough so the task of CGI in the 1990s would have made everything much more difficult and expensive. The reasoning behind this being continued through the subsequent movies, though, is more about how imposing the featherless versions look.

In 2015, Jurassic World provided an in-universe explanation for the featherless dinosaurs. As a nod to the mystery from viewers and the flak from paleontologists, Dr. Wu (B.D. Wong) explained that the dinosaurs have been genetically modified and their DNA is not completely from dinos. He shared that he had been using that method his whole career which explained why the dinosaurs in Jurassic Park also weren't historically accurate in the decades prior. It seems more likely that the filmmakers went with how most people would perceive dinosaurs in the hopes that dino experts would take notice.

A three-dimensionally preserved skull of a...

Paleontologists in Argentina have discovered...

Although this line of Funko Pop! vinyl...

This is the most Dubai thing you’ll see all...

The evolutionary tale of birds is full of...