Oviraptor was a small, bird-like, omnivorous dinosaur. It was about 6 to 8 feet long (1.8 to 2.5 m), weighing about 55 to 76 pounds (25 to 35 kg). It was lightly built, fast-moving, long-legged, and bipedal (it walked on two legs). It had a curved, flexible, s-shaped neck, a long tail, short, strong arms, and curved claws on its three-fingered hands and three-toed feet. The claws on its large hands were about 3 inches (8 cm) long. Its fingers were long and grasping. 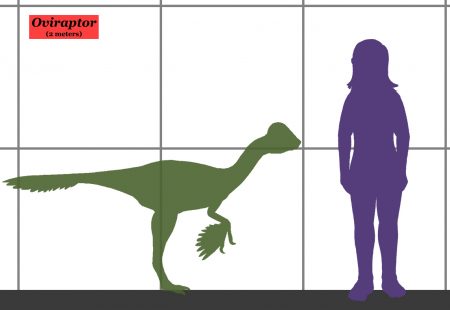 Its strangely-shaped, parrot-like head had a short, toothless beak and extremely powerful jaws, built for crushing action. Oviraptors had a small, stumpy, horn-like crest on its snout, probably used for a mating display; differences in these crests may represent different oviraptor species or the difference between the male, female, and juvenile of the species.

Oviraptor lived in the late Cretaceous period, during the late Campanian stage about 75 million years ago; only one definitive specimen is known (with associated eggs), from the Djadokhta Formation of Mongolia, though a possible second specimen (also with eggs) comes from the northeast region of Inner Mongolia, China, in an area called Bayan Mandahu.

This dinosaur was discovered during the 1920s American expeditions to Mongolia. Most of the specimens were found near nests of dinosaur eggs. Because the eggs were thought to belong to Protoceratops-a small, common ceratopsian in that region-it was assumed that Oviraptor was stealing the eggs. The eggs, however, lacked embryos. When, in the 1990s, American teams returned to Mongolia, they found more of the same kinds of eggs, including some that contained the delicate skeletons of embryos of Oviraptor, not of Protoceratops. Soon after that, more amazing fossils came to light. They were of Oviraptor skeletons sitting on nests, with their forelimbs wrapped around the eggs. These were probably skeletons of parents incubating and protecting their own eggs. Oviraptor, it would seem, was named for a crime that it did not commit.

Aside from its unjust reputation as an egg thief, Oviraptor is well known for being one of the most birdlike of all dinosaurs. This theropod possessed a sharp, toothless beak, and it may also have sported a chicken-like wattle. Although no direct evidence has been adduced from its sparse fossil remains, Oviraptor was almost certainly covered with feathers, the rule rather than the exception for the small meat-eating dinosaurs of the later Cretaceous period.

How Old Are Fossils?

Scientists can use scientific tests to...

John Hammond: What Happened to the Jurassic Park Founder

Of all the fan-favorite characters to appear...

“Andrew”: The Smallest Diplodocus Skull Ever Discovered Reveals Clues About The Group's Evolution.

From giant parrots and feathered ...