A seemingly unremarkable fossil first collected on a Melbourne beach more than 60 years ago has turned out to be the oldest known evidence of the rare pygmy right whale.

The ancient bone was found in the bayside suburb of Beaumaris by Museums Victoria honorary palaeontologist George Baxter Pritchard in the first half of last century, and placed in one of the museum’s collections.

But only recently did palaeontologist Erich Fitzgerald decide to take a closer look at the object.

He discovered the fossil was a six-million-year-old ear bone from a pygmy right whale.

It is the oldest known evidence of the species, which is still found in the Southern Ocean.

The find was made even more significant by the fact there are only six pigmy right whale fossils in the world, Dr Fitzgerald said.

“It’s a startling thing about museums that we can make big discoveries without having to take one step outside of the museum building,” he said.

Little is known about pygmy right whales – the smallest whales in the baleen family.

Dr Erich Fitzgerald looks into a microscope at a Museums Victoria laboratory. 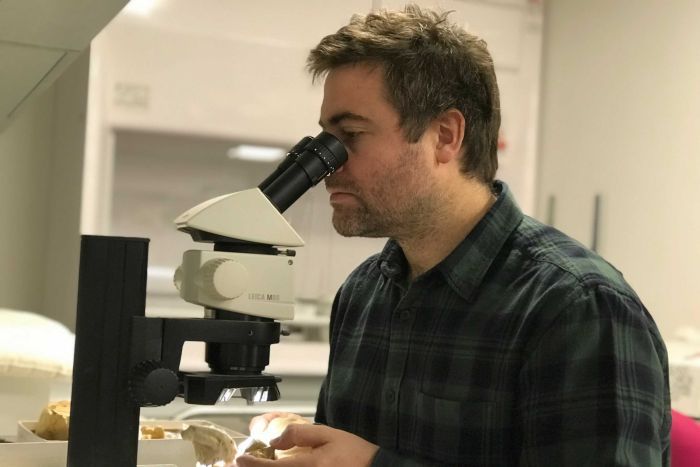 They have a dorsal fin but only spend a few minutes on the surface, making them hard to spot.

The fossil is about the size of an apricot.

Dr Fitzgerald said Mr Baxter, who found the bone all those years ago, was a pioneer of palaeontology in Australia.

“He undertook some of the pioneering studies in the geology and prehistory of Victoria and elsewhere in Australia,” he said.

“Now more than 60 years after his discovery at Beaumaris we can unlock the secrets of his finds and share them with the world.”

A team of scientists have revealed that...

JURASSIC Park got a little bit closer to...

These Dinosaurs Tooted Their Own Horns

The sounds made by...