Large tidal ranges from the Late Silurian to the Late Devonian period (420 to 380 million years ago) could have fostered both the evolution of air-breathing organs in bony fish to facilitate breathing in oxygen-poor tidal pools and the development of weight-bearing limbs in early tetrapods, the first vertebrate land-dwellers, to aid navigation within the intertidal zones, according to new research from Bangor University, the University of Oxford, and Uppsala University.

Tides are a major component of the interaction between the marine and terrestrial environments.

They play an important part in shaping the environmental context for the evolution of shallow marine and coastal organisms.

“During long periods of the Earth’s history, we’ve had small tidal ranges,” said Professor Per Ahlberg, a researcher in the Department of Organismal Biology at Uppsala University.

“But in the Late Silurian and Early Devonian, they seem to have been large in some parts of the world.”

“These results appear highly robust, because even if we changed model variables such as ocean depth, we got the same patterns.”

For the study, Professor Ahlberg and colleagues used a dedicated tidal model and paleogeographic reconstructions from this critical period to explore the potential significance of tides for the evolution of bony fish and land vertebrates.

Their first-of-their-kind results show tidal variations in excess of 4 m (13.1 feet) occurring around an area known as the South China block, which is the site of the origin and diversification of the earliest bony fish group, and has produced the earliest important fossils for this group.

Geological evidence also points to tidal environments being closely associated with this class of fossils. 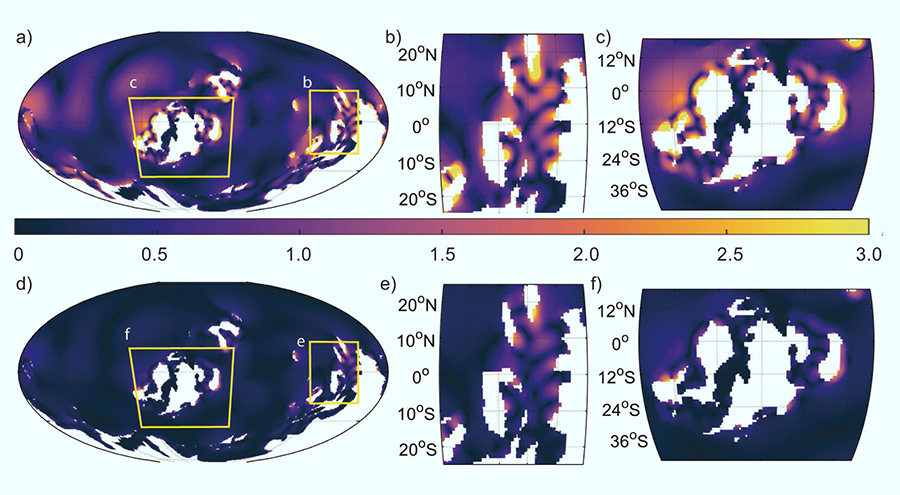 These results also stimulate the need for more detailed tidal simulations of the ancient Earth.

In particular, the researchers believe that their method can be used with a variety of paleogeographic reconstructions at other time periods, to explore the tidal influence upon the origin and diversification of other early vertebrates, and perhaps the opposite as well: what might have been the role of tides in precipitating marine extinction events?

“Our results open the door to further and even more detailed tidal analyses of key episodes in Earth’s past,” Professor Ahlberg said.

“The method can be used to explore the possible role of tides in other evolutionary processes of vertebrate development.”

“And perhaps, conversely, whether tides, with their influence on ocean dynamics, played a part in the big marine extinctions that have taken place again and again in Earth’s history.”

The study was published in the Proceedings of the Royal Society A.