Majungasaurus (“Mahajanga lizard”) is a genus of abelisaurid theropod dinosaur that lived in Madagascar from 70 to 66 million years ago, at the end of the Cretaceous Period. The genus contains a single species, Majungasaurus crenatissimus. This dinosaur was briefly called Majungatholus, a name which is now considered a junior synonym of Majungasaurus. 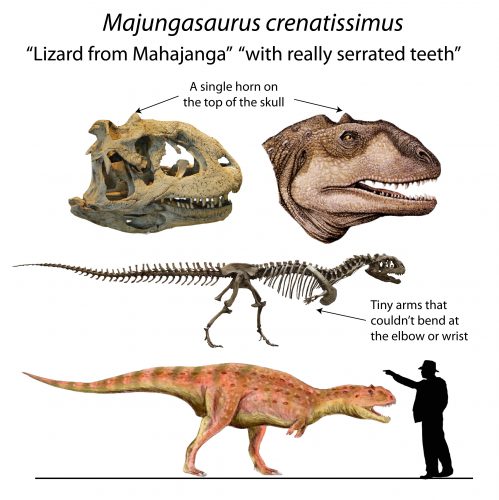 Like other abelisaurids, Majungasaurus was a bipedal predator with a short snout. Although the forelimbs are not completely known, they were very short, while the hind limbs were longer and very stocky. It can be distinguished from other abelisaurids by its wider skull, the very rough texture and thickened bone on the top of its snout, and the single rounded horn on the roof of its skull, which was originally mistaken for the dome of a pachycephalosaur. It also had more teeth in both upper and lower jaws than most abelisaurids.

Known from several well-preserved skulls and abundant skeletal material, Majungasaurus has recently become one of the best-studied theropod dinosaurs from the Southern Hemisphere. It appears to be most closely related to abelisaurids from India rather than South America or continental Africa, a fact that has important biogeographical implications. Majungasaurus was the apex predator in its ecosystem, mainly preying on sauropods like Rapetosaurus, and is also one of the few dinosaurs for which there is direct evidence of cannibalism.

Majungasaurus is classified as a member of the theropod clade Abelisauridae, which is considered a family in Linnaean taxonomy. Along with the family Noasauridae, abelisaurids are included in the superfamily Abelisauroidea, which is in turn a subdivision of the infraorder Ceratosauria. Abelisaurids are known for their tall skulls with blunt snouts, extensive sculpturing on the outer surfaces of the facial bones (convergent with carcharodontosaurids), very reduced (atrophied) forelimbs (convergent with tyrannosaurids), and stocky hindlimb proportions, among other features.

An interesting fact about this dinosaur is that due to the pro ponderous of skeletal material, this dinosaur is currently one of the most studied dinosaurs of all time. It is believed to have been the apex predator of its ecosystem.

Before humans, dinosaurs ruled the world,...

Researchers Discover An Ancient Rodent That Lived 2.6 Million Years Ago In Eastern Morocco

Researchers from Morocco and Spain...

One of the most celebrated blockbusters of...

Paleontologists in Tanzania have found...

A new study, led by scientists at the...