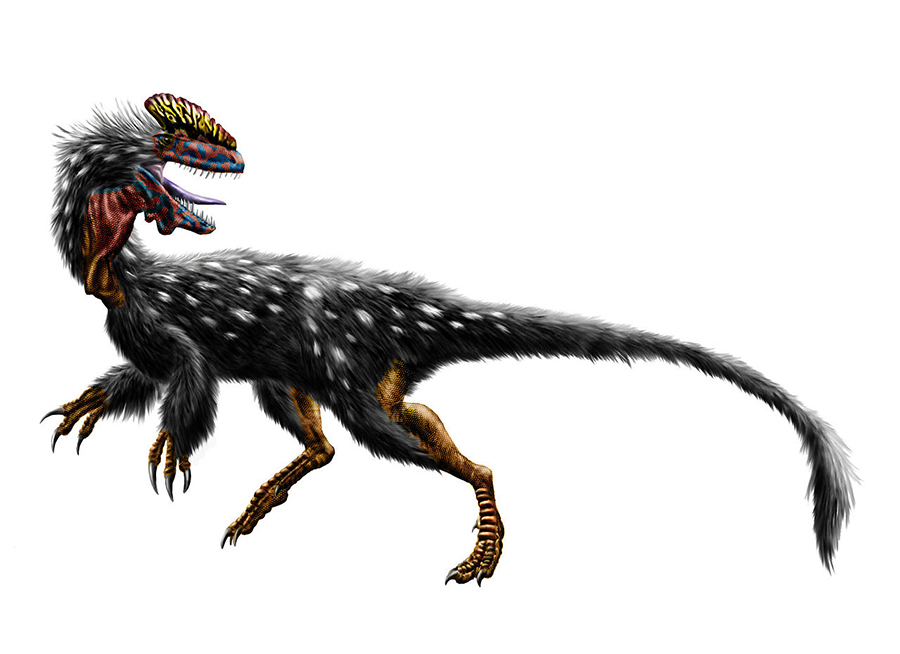 Guanlong is a genus of proceratosaurid tyrannosauroid from the Late Jurassic of China. The taxon was first described in 2006 by Xu et al., who found it to represent a new taxon related to Tyrannosaurus. The name is derived from Chinese, translating as "five colored crowned dragon". Two individuals are currently known, a partially complete adult and a nearly complete juvenile. These specimens come from the Oxfordian stage of the Chinese Shishugou Formation.

About 3 m (9.8 ft), its fossils were found in the Shishugou Formation dating to about 160 million years ago, in the Oxfordian stage of the Late Jurassic period, 92 million years before its well-known relative Tyrannosaurus. This bipedal saurischian theropod shared many traits with its descendants, and also had some unusual ones, like a large crest on its head. Unlike later tyrannosaurs, Guanlong had three long fingers on its hands. Aside from its distinctive crest, it would have resembled its close relative Dilong, and like Dilong may have had a coat of primitive feathers.

Guanlong was discovered in the Dzungaria area of China by a joint expedition by scientists from the Institute of Vertebrate Paleontology and Paleoanthropology and George Washington University, and named by Xu Xing and others in 2006. Guanlong comes from the Chinese words for "crown" and "dragon", referring to the crest. The specific epithet, wucaii (Hanyu Pinyin: wǔcǎi), means "multicoloured" and refers to the colours of rock of the Wucaiwan, the multi-hued badlands where the creature was found.

At present, Guanlong is known from two specimens. The holotype (IVPP V14531) is a reasonably complete, partially articulated adult skeleton. Another, immature specimen is known from fully articulated and nearly complete remains. The crest on the skull of the immature specimen is notably smaller and restricted to the forward portion of the snout, while the adult has a larger and more extensive crest. The crests of both specimens are thin, delicate structures that likely served as display organs, possibly for events like mating.

The age of the two individuals were determined using a histological analysis. The adult was shown to have matured at 7 years of age, and died at the age of 12. The juvenile died at 6, and was still growing. As the individuals are different ages, it can be seen some of the changes that happened during growth. In the juvenile, the crest is restricted to the snout, which is proportionally shorter. The orbit is also larger, the hand comparatively larger, the lower leg is longer, the pubic bone has a less expanded end, and other features found in more derived coelurosaurs and tyrannosauroids.

Guanlong possessed a cranial crest, which may have been used for display. It is similar to those of Dilophosaurus and Monolophosaurus, and like those it was highly pneumatized. However, it was more delicate than in the other genera, and also proportionately larger and more elaborate. Structures in Dilophosaurus and Monolophosaurus have also been suggested to be for species recognition, but the more gracile crest of Guanlong is more likely for display purposes.