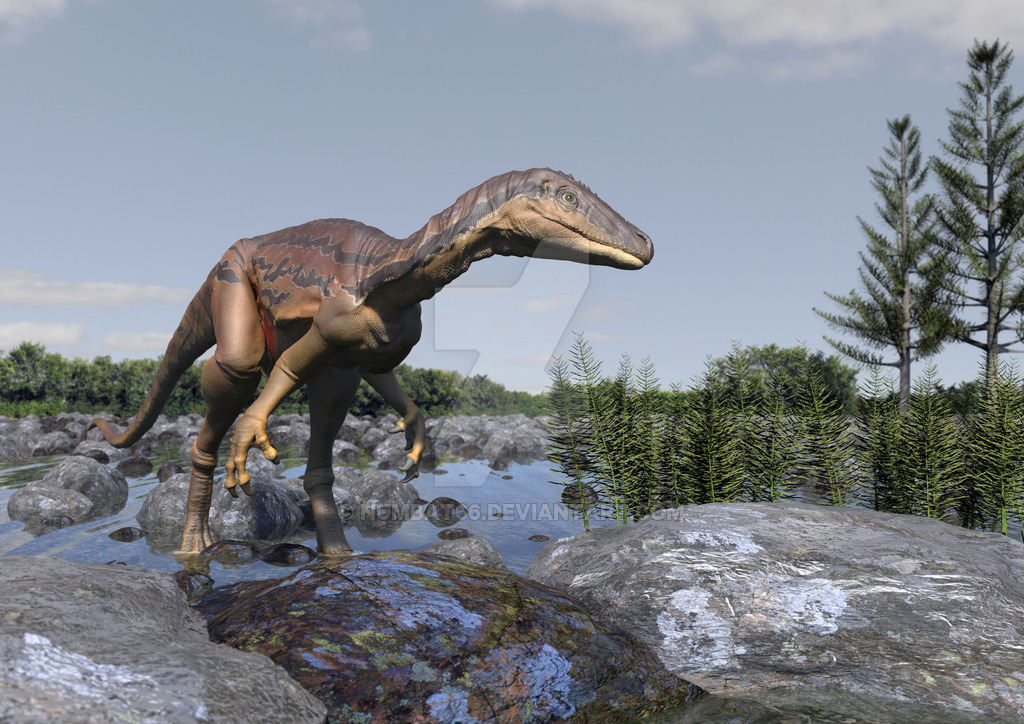 Eoraptor, binomial name Eoraptor Lunensis, meaning ‘dawn thief’, was a species of dinosaur classified under the saurischia order of dinosauria. It is widely considered to be one of the worlds earliest dinosaurs. The Eoraptor lived during the late Triassic Period, around 230 to 190 million years ago (mya), and is believed to resemble the ancestor of all dinosaurs. It is known by well-preserved fossil records found in Argentina.

The Eoraptor, was given the name raptor but it has no relations to the Velociraptor or any dromaeosauridea. Like many early dinosaurs, had a relatively small body in comparison to dinosaurs of later periods. It had a thin body that was approximately one metre in length when fully developed, and weighed approximately 10 kilograms. A bipedal carnivore, the Eoraptor ran upright on its hind legs, while its fore limbs were only half the length of the hind legs. Each fore limb ended in a five digit hand, with three of the digits ending in large claws that were believed to be used to catch and handle prey. While it was believed to have eaten small animals, due to its like swift speed and sharp claws, the Eoraptor also possessed both herbivorous and carnivorous teeth, leading to suggestions that it may have been omnivourous.

The genus name Eoraptor is derived from the Greek word eos (ηως) meaning “dawn”, a reference to its primitive nature and the Latin word raptor meaning “plunderer”, a reference to its presumed carnivorous nature and its grasping hand. The specific name lunensis is derived from the Latin words luna meaning “moon”, and the suffix ~ensis, meaning “inhabitant”. The specific name lunensis is a reference to its place of discovery: the “Valle de la Luna”, which is Spanish for “Valley of the Moon.” This valley is so named because of its arid, otherworldly appearance, evocative of a lunar landscape. The type species is Eoraptor lunensis, which means “dawn plunderer from the Valley of the Moon”. Eoraptor was described and named by Paul Sereno, Catherine Forster, Raymond R. Rogers, and Alfredo M. Monetta in 1993.

Eoraptor is thought to have been an omnivore. It was a swift sprinter and, upon catching its prey, it would use claws and teeth to tear the prey apart. Unlike later, carnivorous dinosaurs, it lacked a sliding joint at the articulation of the lower jaw, with which to hold large prey. Furthermore, only some of its teeth were curved and saw-edged, unlike those in the mouths of later theropods. The unique heterodont dentition of Eoraptor (Sereno et al., 1993) consists of both serrated, recurved teeth in the upper jaw, like the teeth of later theropods, and leaf-shaped teeth in the lower jaw, like the teeth of basal sauropodomorphs. Eoraptor had 4 teeth in the lower jaw and 18 teeth in the upper jaw, a dental formula not dissimilar to that of Herrerasaurus.

The first rumours of this summer’s LEGO...

Paleontologists in China have uncovered exceptionally...

Palaeontologists have found the fossils of a...

Since Charles Darwin, insect pollination was...

A teen searching for arrowheads in southern...

How Fossil Fuel Use Is Making Carbon Dating Less Accurate

The scientific process of ...

A tiny fossil of an early juvenile...

Hold on to your butts because it sounds like...

Siats: The Giant before the Tyrant!

A team of researchers has reconstructed and...