Dinosaurs Ranked by Their Theoretical Ability to Play Baseball 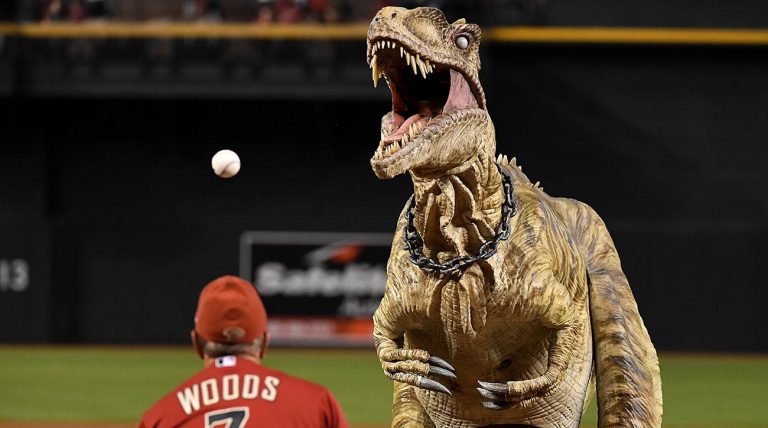 For millions of years, dinosaurs ruled the earth, striding the planet like the colossi they were. But sadly for them, they were all wiped out 65 million years ago, or roughly 65 million years before baseball was invented.

Well, that’s what I’m here for. Presented below is an extremely scientific and thorough ranking of dinosaurs based on their ability to play baseball. This list has been vetted and endorsed by an international coalition of paleontologists and biologists, all of whom agreed that it was very correct and that I am very smart. I had originally planned on presenting this as a speech at the American Museum of Natural History in New York, but I want to share it with you, the reader, so you may bask in my brilliance.

No question as to who’s first for me. With its massive bone club tail, this 13,000-pound beast would have been the Aaron Judge or Giancarlo Stanton of its day.

I don’t know how useful the Pterodactyl would’ve been offensively, given the fact that it has wings and not arms, but its ability to fly would give it absurd, Kevin Kiermaier-esque range in centerfield.

Tipping the scales at as many as 33 tons, the Apatosaurus was one of the largest dinosaurs of all time and used its huge tail as a whip to deter predators, making it the rough equivalent of Prince Fielder but with better bat speed. Have to park it at first base, though.

A wildly effective predator with giant claws on its feet and plenty of speed, this dinosaur would’ve been a monster on the base paths. (Sidenote to Billy Hamilton: If you strap knives to your feet, you will steal 200 bases in a season, guaranteed.)

Listed at a whopping 49 feet long and weighing 25 tons, Spinosaurus is bigger even than the mighty Tyrannosaurus Rex, and may be the largest predator the world has ever seen. I don’t know if that makes it any good at baseball, but I’m definitely not ranking a dinosaur that good/cool lower than fifth in any list.

With that giant bony frill on its head, the Triceratops would’ve made for a great catcher, and one practically immune to getting hurt on foul tips, too. Plus, those horns would deter both passed balls and the likes of Jacoby Ellsbury drawing catcher’s interferences.

Pros: Huge, has big bony plates on its back that would help it get on base via hit by pitch. Cons: Spiky tail would’ve made using it as a bat difficult, had a brain the size of a walnut. Could go either way on this one.

The so-called King of the Dinosaurs is at a serious disadvantage thanks to his puny little arms. Still, his reputation gets him on this list.

A dinosaur whose reality (covered in feathers, about the size of a turkey) doesn’t match up to its media-created hype. That makes it the Jeff Francoeur of the late Cretaceous.

I don’t know how advantageous a giant bony domed head would’ve been for baseball, but it does obviate the need for a helmet, which saves money.

Flying “Wing Lizards” with necks as long as...

Which Jurassic Park Dinosaurs Are Real (And Which Are Made Up)

While most of the dinosaurs in the ...

A man was busted on Sunday for allegedly...

Rhoetosaurus brownei: A 'High-Heeled' Dinosaur that Walked on its Tiptoes