Is the Dinosaur Family Tree Becoming a Dinosaur? | Paleontology World

Is the Dinosaur Family Tree Becoming a Dinosaur?

The division of dinosaurs into two groups, a taxonomy that dates back to the Victorian era, is looking increasingly shaky to some paleontologists in light of a wealth of new fossil discoveries.

But what if it’s wrong? What if the established dinosaur family tree is, well, a dinosaur?

That question has sparked a heated debate among paleontologists. The Victorian-era model now has a formidable rival.

The debate reverberates beyond paleontology, as learning about dinosaurs often marks our first interaction with evolutionary biology. So as the scientists delve into the data, they open a window for the public to view how scientific models change.

“Just because we grew up with these ideas doesn’t mean that that’s set in stone,” says Peter Makovicky, associate curator at the Field Museum in Chicago. “We have to continuously revisit the evidence.”

It began in March. With all the new dinosaur fossils – just last year saw 36 new species described – it’s time to rethink the structure of the dinosaur family tree, according to Matthew Baron, who was a PhD student at the University of Cambridge at the time. After examining a massive dataset of dinosaur fossils, Dr. Baron and his advisors proposed a new model, placing the typically two-legged lizard-hipped theropods (like Tyrannosaurus) on a branch with the bird-hipped dinosaurs (like Stegosaurus and Triceratops), and the four-legged lizard-hipped, long-necked sauropods (like Brontosaurus) off on their own branch.

That shake-up of the dinosaur family tree set off a whirlwind of press activity and a flurry of exchanges among paleontologists. But we shouldn’t rewrite the textbooks just yet, say another group of paleontologists, in a paper published Wednesday in the journal Nature. This team, led by Max Langer of the Universidade de São Paulo in Brazil, reexamined the data underpinning the Baron et al. paper and concluded that the traditional dinosaur family tree should still stand – at least for now.

But the debate is still far from settled. This responding study actually found support for both models. The difference was “statistically indistinguishable,” says study co-author Steve Brusatte of the University of Edinburgh, although the results slightly leaned toward the traditional model.

That family tree traces its roots back to 1888, when a British paleontologist, Harry Seeley, proposed that the distinction between dinosaur groups hinged on the hips. Seeley noted that all the dinosaur hip fossils on hand could easily be sorted into two groups determined by whether their pubic bones pointed forward or backward. Those that pointed forward resembled the hips of lizards, so Seeley dubbed that group saurischians (“lizard-hipped”). Likewise, the ornithischians (“bird-hipped”) had backward pointed pubic bones resembling those seen in birds. 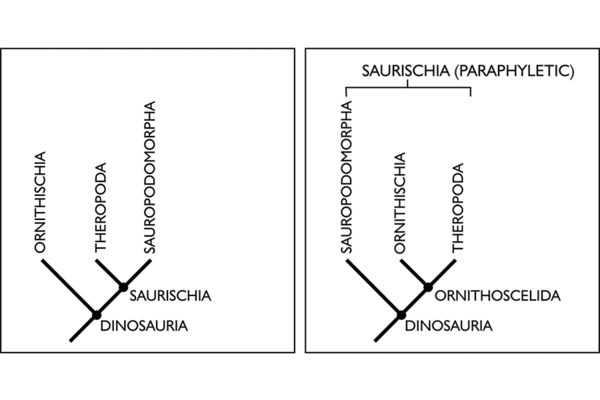 So what does it take to overthrow a scientific model?

“Right now we’re at a point where we don’t really know with a lot of confidence” what the best model is, Dr. Brusatte says. “There have been so many new fossils, and now there are new datasets and some new techniques that are being used, and it’s thrown everything up into the air.”

What’s a paleontologist to do? The dinosaur family tree, or phylogeny, as scientists call it, underpins the major questions about how these creatures came to rule the Earth millions of years ago. And toppling an established scientific model is no easy feat.

“When you propose such a radical change to a well-established idea, you need very strong evidence,” Dr. Langer writes in an email. “The evidence they were putting forward in support of their model was not as strong as necessary to overthrow decades of studies pointing to another direction.”

Baron and his colleagues penned a rebuttal to the new paper. Still, Baron hopes that the debate will ultimately transcend the back-and-forth of papers and that all the scientists will find a consensus as a team.

For living animals, building phylogenies can be a bit less controversial, because the animals’ genomes are available. And that foundation can reveal surprising relationships. For example, genetic research in 2014 revealed that a tiny shrew that lives in Namibia is actually closely related to elephants.

But when it comes to dinosaurs, all paleontologists have to work with is appearance. DNA degrades too quickly to have lasted the millions of years that have elapsed since the dinosaurs went extinct (sorry, “Jurassic Park” fans). And bones and footprints can be ambiguous.

“It doesn’t mean that we’re making it up,” Brusatte says. “It just means that it’s going to be different depending on which human is looking at these bones and trying to make sense of them.”

With so many dinosaur fossils turning up around the globe, paleontologists have to rely heavily on each others’ descriptions of a new specimen to classify where the species fits in. And that’s where the disagreements come in, right at the root of the discussion.

For more than a century, paleontologists largely sought to place each new find somewhere on the tree that grew out of Seeley’s categorizations. Baron says that when a fossil wasn’t a perfect fit, “we always tried to shoehorn the new find into the old model somehow.”

Could there be some sort of Rosetta Stone fossil that sits just at the right point in the Triassic period, when dinosaurs first emerged, that could resolve the debate? Possibly, says Brusatte. If that animal had a mix of features distinctive of both ornithischians and theropods, then that would be evidence that Baron and his colleagues are correct.

But evolution itself could confound such a revelatory find. Sometimes two unrelated species can undergo convergent evolution, a process by which two different animals independently evolve a similar trait. For example, birds have backward oriented pubic bones (aka bird hips), and they’re dinosaurs. But they are not ornithischians (“bird-hipped” dinosaurs). Birds actually evolved from the theropod lineage, which is one of the two main groups classified as “lizard-hipped.”

Furthermore, evolution isn’t linear, it’s bushy and has many dead ends. In other words, a fossil with features of two different groups might not be in the middle of a transition from one to the other. And because not every organism is preserved in the fossil record, determining what is and is not a dead end can be tricky.

Despite the dramatic headlines, a new dinosaur family tree might not actually be a scientific revolution, says Derek Turner, a philosopher of science at Connecticut College. “I do think it would be a pretty significant change if the new model catches on,” he says, as it will open up new questions about dinosaur evolution. “But I think a lot of the upheaval would be more on the public understanding side.”

Dr. Makovicky, who was not an author on either paper, agrees. For many children, this is the first evolutionary family tree they learn about from the deep past, he says. And that divide between bird-hipped and lizard-hipped dinosaurs is deeply entrenched in books and museum displays.

But just as dinosaurs have long helped engage children and adults alike with science, this debate can help communicate a key piece of how science works. “Science is not just pushing the boundaries of what we can call new knowledge,” Makovicky says. “A big part of science is actually self-correction and revising things that we assumed we knew.”

Welcome to Pleistocene Park: The Mammoth Plan to Recreate an Ice Age Ecosystem in Siberia

The Pleistocene Park project is aiming to rebuild a lost...

It is the first record of a plesiosaur from the...

Jurassic World: Dominion is set to...

Paleontologists in Italy have discovered an...

An international team of researchers...

Three lakh rupees is the annual budget allocated for the...

Paleontologists from the Chinese Academy of...

Although it has been over 25 years since...