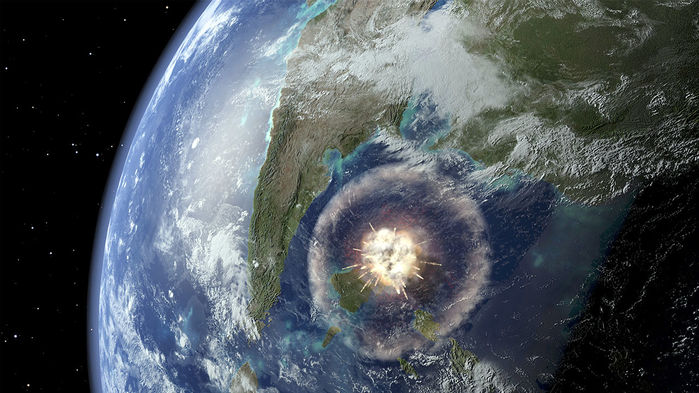 When a 10-kilometer-wide asteroid hit the Gulf of Mexico 66 million years ago, it drove over 75% of Earth’s species to extinction, including the dinosaurs. But within just a few years, life returned to the submerged impact crater, according to a new analysis of sediments in the crater. Tiny marine creatures flourished thanks to the circulation of nutrient-rich water. That return of life could offer lessons in how marine ecosystems might recover after the dramatic shifts caused by climate change, the researchers suggest.

The new findings reveal “how resilient life can be,” says Gareth Collins, a planetary scientist at Imperial College London who was not involved in the research. “Such a rapid recovery … is remarkable.”

Some scientists hypothesize that life might slowly creep back into impact craters, perhaps because of toxic metals such as mercury and lead scattered by the impact. Other impact craters tell a tale similar to that idea: The 85-kilometer Chesapeake Bay crater, for instance, was devoid of life for thousands of years after a comet or asteroid hit modern-day Virginia some 35 million years ago.

As part of an effort to understand how planets respond to large impacts, a team of scientists in 2016 drilled into the 180-kilometer Chicxulub crater, the only impact structure linked to a global extinction event. The team brought up hundreds of roughly arm-length sediment cores. Some bore the scars of the extreme temperatures and pressures of the event, which drove rocks to behave like a fluid: Mountains the height of the Himalayas rose and fell within the span of minutes. One core, taken from roughly 600 meters below the modern sea floor, contained 76 centimeters of dull brown limestone—not much to look at, but perhaps the most treasured swath of sediment from the entire drilling project, at least to Chris Lowery.

Lowery, a paleoceanographer at the University of Texas Institute for Geophysics in Austin, and his colleagues began to analyze the fine grains of sediment that made up the limestone. Relying on equations that describe how long it takes tiny particles to settle through a liquid, they calculated that the grains were deposited on the sea floor rapidly after the impact, in just a few years. When Lowery and his colleagues peered into the layers of limestone, they found numerous fossils and burrows, evidence of small worms, shelled creatures known as foraminifera, and plankton. Life was back.

But how did life colonize Chicxulub’s ground zero so quickly? It had nothing to do with the magnitude of the impact or the crater’s size, Lowery says. Instead, the deciding factor may have been the crater’s shape. Chicxulub’s northeastern flank was open to the Gulf of Mexico, which allowed deep, nutrient-carrying water to circulate throughout the crater, the team reports today in Nature. In contrast, the Chesapeake Bay crater was closed, which meant oxygen consumed by decomposing organic matter was not replenished, and aerobic life would have quickly died. “You basically had a dead zone,” Lowery says.

Lowery and his colleagues suggest the Chicxulub impact holds lessons for ocean life today, which is threatened by oxygen depletion, ocean acidification, and rising temperatures. “It’s probably the only event that happened faster than modern climate change and pollution,” Lowery says. “It might be an important analog for the recovery of biodiversity after we finally curtail carbon dioxide emissions and pollution.”