A new genus and species of ophthalmosaurid ichthyosaur that swam in the Late Jurassic seas has been identified from an exceptionally well-preserved specimen found in Dorset, England.

Ichthyosaurs were a successful group of large marine reptiles for most of the Mesozoic Era.

By the Jurassic period, they had evolved into highly adapted marine predators, with a streamlined body for moving through the water, large eyes for improved vision at depth and an elongated skull with jaws full of conical teeth, suited for catching fish and squid.

The aquatic reptile was about 2 m (6.6 feet) long, and had a deep ribcage, small forelimbs and hundreds of tiny, delicate, smooth teeth.

It belongs to Ophthalmosauridae, an extinct family of ichthyosaurs known from the Middle Jurassic to the Late Cretaceous of Asia, Australia, Europe, North America and South America.

“There are a number of things that make this animal special, not least of which is its unusual rib cage and small flippers,” said co-author Professor David Martill, a paleontologist in the School of the Environment, Geography and Geosciences at the University of Portsmouth.

“It may have swum with a distinctive style from other ichthyosaurs.” 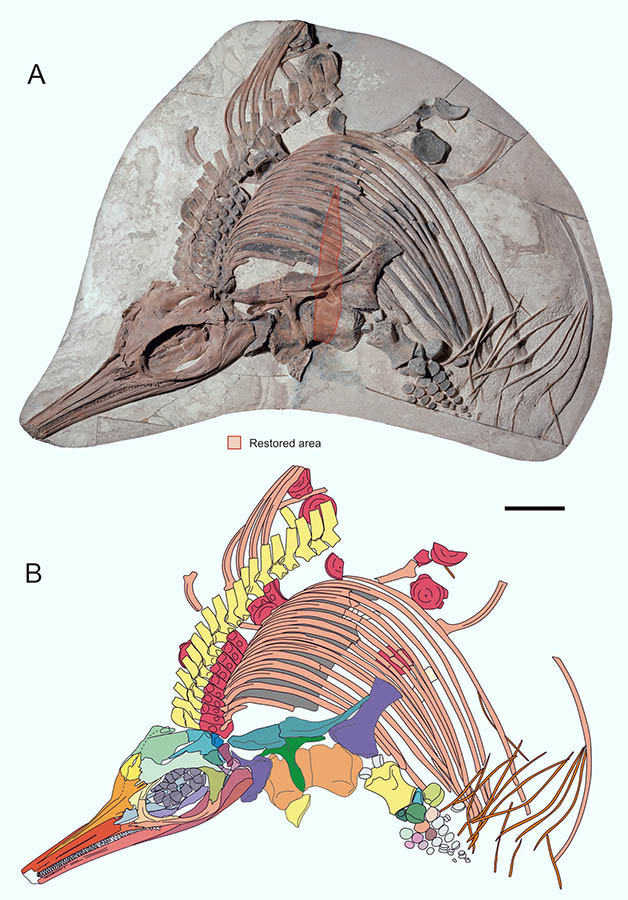 “One idea is that it could be a deep diving species, like sperm whales,” added lead author Megan Jacobs, a doctoral candidate in the Department of Geosciences at Baylor University.

“The extremely deep rib cage may have allowed for larger lungs for holding their breath for extended periods, or it may mean that the internal organs weren’t crushed under the pressure.”

“It also has incredibly large eyes, which means it could see well in low light. That could mean it was diving deep down, where there was no light, or it may have been nocturnal.”

“With the deep rib cage, the creature would have looked very barrel-like.”

“The specimen’s hundreds of tiny teeth would have been suited for a diet of squid and small fish, and the teeth are unique by being completely smooth.”

“All other ichthyosaurs have larger teeth with prominent striated ridges on them, so we knew pretty much straight away this animal was different.”

The fossilized remains of Thalassodraco etchesi — a near complete skull with associated vertebral column, dorsal ribs, left forelimb and other elements — were collected in 2009 by fossil collector Dr. Steve Etches from the White Stone Band outcropping in Rope Lake Bay, Dorset.

“Skeletons of Late Jurassic ichthyosaurs in the UK are extremely rare, so, after doing some research, comparing it with those known from other Late Jurassic deposits around the world, and not being able to find a match was very exciting,” Jacobs said.

“Thalassodraco etchesi is a beautifully preserved ichthyosaur, with soft tissue preservation making it all the more interesting.”

The discovery is reported in a paper in the journal PLoS ONE.