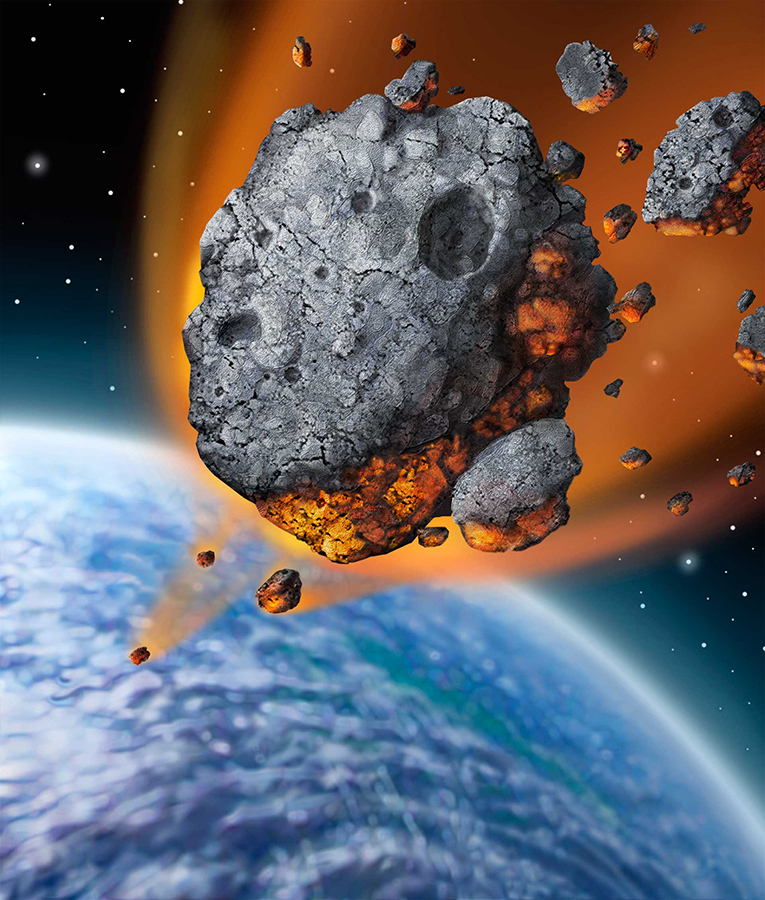 The Younger Dryas impact hypothesis, also known as Clovis comet hypothesis, posits that the hemisphere-wide debris field of a large, disintegrating asteroid (or comet) struck North America, South America, Europe, and western Asia approximately 12,800 years ago. This event triggered extensive biomass burning, brief impact winter, climate change, and contributed to extinctions of late Pleistocene megafauna. Controversial from the time it was proposed, this hypothesis continues to be contested by those who prefer to attribute the end-Pleistocene reversal in warming entirely to terrestrial causes. Now, University of California, Santa Barbara’s Professor James Kennett and co-authors present further geologic and paleontological evidence of the cosmic impact, this time far south of the equator.

“We have identified the Younger Dryas boundary (YDB) layer at high latitudes in the Southern Hemisphere at near 41 degrees south, close to the tip of South America. This is a major expansion of the extent of the YDB event,” Professor James Kennett said.

“The vast majority of evidence to date has been found in the Northern Hemisphere.”

This discovery began several years ago when a group of Chilean scientists studying sediment layers at a well-known Quaternary paleontological and archaeological site, Pilauco Bajo, recognized changes known to be associated with YDB impact event.

They included a ‘black mat’ layer, 12,800 years in age, that coincided with the disappearance of South American Pleistocene megafauna fossils, an abrupt shift in regional vegetation and a disappearance of human artifacts.

The analyses of the Pilauco sediments yielded the presence of microscopic spherules interpreted to have been formed by melting due to the extremely high temperatures associated with impact.

“Among the most important spherules are those that are chromium-rich,” Professor Kennett said.

The spherules from the Pilauco site contain an unusual level of chromium, an element not found in Northern Hemisphere YDB impact spherules, but in South America.

“It turns out that volcanic rocks in the southern Andes can be rich in chromium, and these rocks provided a local source for this chromium. Thus, the cometary objects must have hit South America as well,” Professor Kennett explained.

“Other evidence, which is consistent with previous and ongoing documentation of the region by Chilean scientists, pointed to a very large environmental disruption at about 40 degrees south.”

“These included a large biomass burning event evidenced by, among other things, micro-charcoal and signs of burning in pollen samples collected at the impact layer.”

“Furthermore, the burning coincides with the timing of major YDB-related burning events in North America and western Europe.”

The sedimentary layers at Pilauco contain a valuable record of pollen and seeds that show change in character of regional vegetation — evidence of a shifting climate. However, in contrast to the Northern Hemisphere, where conditions became colder and wetter at the onset of the Younger Dryas, the opposite occurred in the Southern Hemisphere.

“The plant assemblages indicate that there was an abrupt and major shift in the vegetation from wet, cold conditions at Pilauco to warm, dry conditions. The atmospheric zonal climatic belts shifted ‘like a seesaw,’ with a synergistic mechanism, bringing warming to the Southern Hemisphere even as the Northern Hemisphere experienced cooling and expanding sea ice. The rapidity — within a few years — with which the climate shifted is best attributed to impact-related shifts in atmospheric systems, rather than to the slower oceanic processes,” Professor Kennett said.

“Meanwhile, the impact with its associated major environmental effects, including burning, is thought to have contributed to the extinction of local South American Pleistocene megafauna as well as the termination of the culture similar to the Clovis culture in the north.”

“The amount of bones, artifacts and megafauna-associated fungi that were relatively abundant in the soil at the Pilauco site declined precipitously at the impact layer, indicating a major local disruption.”

The distance of the Pilauco site — 3,728 miles (6,000 km) from the closest well-studied site in South America — and its correlation with the many Northern Hemispheric sites greatly expands the extent of the YD impact event.

“The sedimentary and paleo-vegetative evidence gathered at the site is in line with previous, separate studies conducted by Chilean scientists that indicate a widespread burn and sudden major climate shifts in the region at about YDB onset. This new study further bolsters the hypothesis that a cosmic impact triggered the atmospheric and oceanic conditions of the Younger Dryas,” Professor Kennett said.

The findings appear in the journal Scientific Reports.