Cambroraster falcatus: This Newfound Predator May Have Terrorized the Cambrian Seafloor | Paleontology World

Cambroraster falcatus: This Newfound Predator May Have Terrorized the Cambrian Seafloor 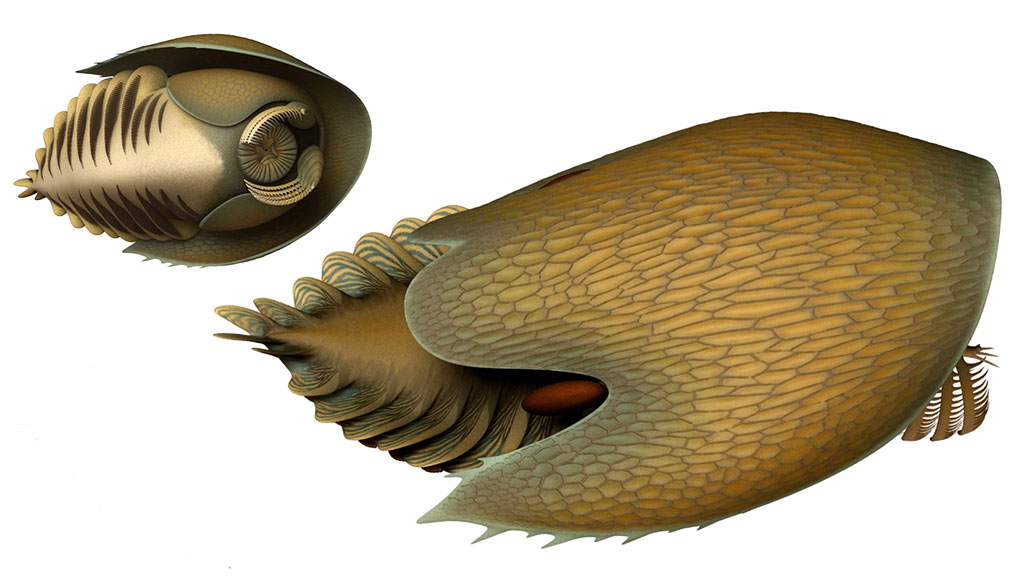 With rakelike claws and a toothy mouth, it could snag prey even under the sand.

A fierce predator, with spiny claws and a round, rasping mouth, terrorized the Cambrian seafloor 508 million years ago as it raked through the sand in search of food.

Dubbed Cambroraster falcatus, the predator was about 30 centimeters long — which, to the tiny prey of the time, likely seemed monstrous enough. But C. falcatus also had a pair of jointed limbs that ended in rakelike claws, a round mouth lined with sharp, serrated plates and a broad, shield-shaped carapace that covered its head and most of its back, giving it a distinct resemblance to a horseshoe crab, or perhaps a spaceship.

Researchers, who describe C. falcatus for the first time July 31 in the Proceedings of the Royal Society B, have now found hundreds of fossils of the ancient arthropod — including one showing the critter’s entire body, both front and back — in Canada’s Burgess Shale (SN: 4/27/19, p. 32).

The creature’s round, tooth-filled mouth “is a type of mouth that doesn’t exist anymore,” and is characteristic of an extinct group of arthropods called radiodonts, says Jean-Bernard Caron, a paleontologist at the Royal Ontario Museum in Toronto. Radiodonts, in general, are rare in the fossil record, Caron says.

This slab shows the stomach side of the most complete C. falcatus fossil, including its two eyes. The outline of the backside of the creature, which is preserved on a counterpart slab, is traced here in white. 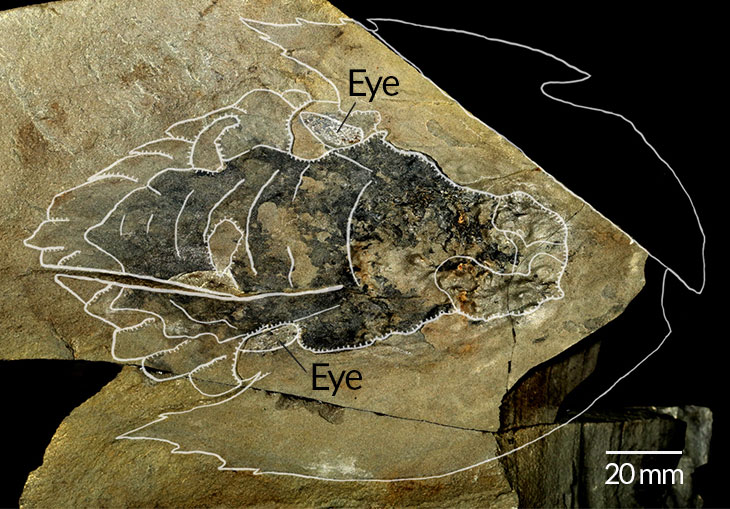 So it was all the more remarkable to find so many specimens of C. falcatus in one location, where the animals may have gathered thanks to abundant food. A mass molting event may also have occurred at the site, the researchers speculate, which would help explain the clusters of appendages and carapaces.

The team spotted what turned out to be the first specimen of C. falcatus in 2012. “But we didn’t know what we were looking at” because the specimens were mostly just bits and pieces, Caron says. Then, in 2016, Caron and paleontologist Joseph Moysiuk of the University of Toronto found the key to the puzzle: a nearly complete fossil of the creature.

Cambroraster refers both to the Cambrian Period when this critter reigned and to the rakelike shape of its front claws, and falcatus to the sickle shape of the carapace. C. falcatus may have used its long, spiky claws to rake through the sand and form a kind of basket in which it trapped animals such as worms, small arthropods and even small fish. It may also have plowed through sediment with its spaceship-shaped head.

“What’s striking about this animal is that it opens a new window into predation during the Cambrian,” Caron says. Previous fossil finds sketched a relatively simple ecosystem structure, he says: Shrimplike predator Anomalocaris was at the top, and some smaller specialized arthropods like trilobites scuttled along the seafloor.

But C. falcatus was something else, he says: a remarkable and fierce predator that occupied its own niche, with adaptations “that really allowed it to feed on anything living in the mud."