Bagualosaurus agudoensis: The "Great-Great-Grandfather" of Giants: New Brazilian Dinosaur Species Brings Leads About the Origin of the Huge Herbivorous Dinosaurs

A study published at the British journal Zoological Journal of the Linnean Society unveils the discovery of a new dinosaur species, which lived in the Triassic Period, about 230 million years ago.

The fossil was found in the Agudo municipality, in Rio Grande do Sul, the southernmost state of Brazil, and it was studied by paleontologists from the Federal University of Santa Maria (UFSM), the Federal University of Rio Grande do Sul (UFRGS) and the São Paulo University (USP). The new species, named Bagualosaurus agudoensis, is part of the Sauropodomorpha lineage, which includes the largest known dinosaurs: herbivores quadrupeds with large magnitudes and long necks, such as the Brontosaurus and the Brachiosaurus, which lived in the Jurassic period.

Even though it is not as giant as its relatives from the Jurassic and Cretaceous periods, the Bagualosaurus was considered large for its period. According to paleontologist Flávio Pretto (UFSM) – who led the study in pursue to his PhD in Geosciences in the Graduate Program at UFRGS – explains, 230 million years ago, when the first dinos began to appear on the planet, the majority of them were small animals, who barely had 1.5m from their snouts to the tip of their tails, while the Bagualosaurus exceeded 2.5m in length.

In addition to being larger than its relatives of the same period which were omnivores, the Bagualosaurus presented teeth which were adapted to feed on plants. Even though it is not possible to confirm with certainty if it had a strictly herbivorous diet, Pretto explains that their teeth and skull shapes indicate that plants were an important part of these animals’ diet, and it is unlikely they also ate meat. "This new eating habit was crucial so the Sauropodomorpha could reach large sizes, as it would be seen millions of years later," the paleontologist states. 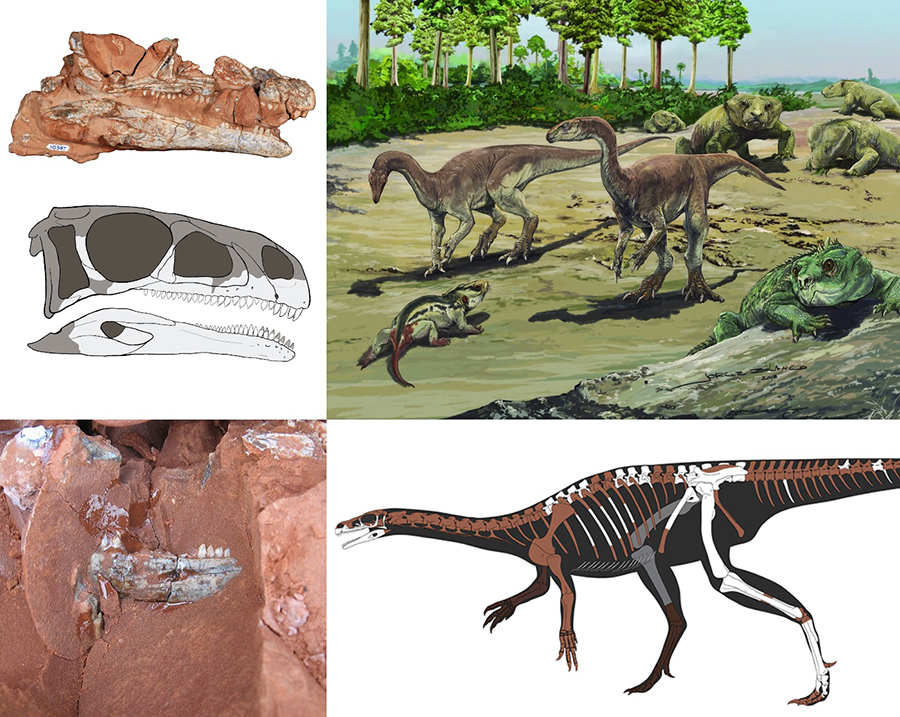 "One of the interesting aspects of the Bagualosaurus is that the animal presents characteristics of dinosaurs which are typically herbivores (for instance, the leaf-like teeth, with a high dental crown, along with a relatively small skull). And, at the same time, it was a large dinosaur for the period standards (competing in size with a significant share of the other herbivore animals of its period)," explains Pretto. Until the moment, these characteristics were thought to have appeared only later, in Sauropodomorphas. "With the Bagualosaurus, we now know this tendency seems to have appeared earlier in the lineage," he adds.

The Bagualosaurus is the seventh dinosaur species attributed to the Rio Grande do Sul Triassic, and it probably lived with four others – Pampadromaeus barberenai, Saturnalia tupiniquim, Buriolestes schultzi and Staurikosaurus pricei. According to the study's co-authors Max Langer and Cesar Schultz, professors at the Biology Department at USP and the Paleontology Department at UFRGS, respectively, dinosaurs’ fossils that ancient are quite rare, with well-preserved skeletons discovered only in the South of Brazil and in the Northwest of Argentina. Thus, almost everything known about the dawn of dinosaurs comes from these South American fossils. Now, with the Bagualosaurus discovery, the origin of gigantism among herbivore dinosaurs begins to be unraveled.

New Study Resolves the Mystery of an Enigmatic Triassic Reptile

Scientists from the University of Bristol...

Jurassic Park In Real Life: 7 Places That Were Used In The Movies

About 66 million years ago, an asteroid...

Redefining Dinosaurs: Paleontologists are Shaking the Dinosaur Family Tree to its Roots

What traits distinguish one dinosaur from...