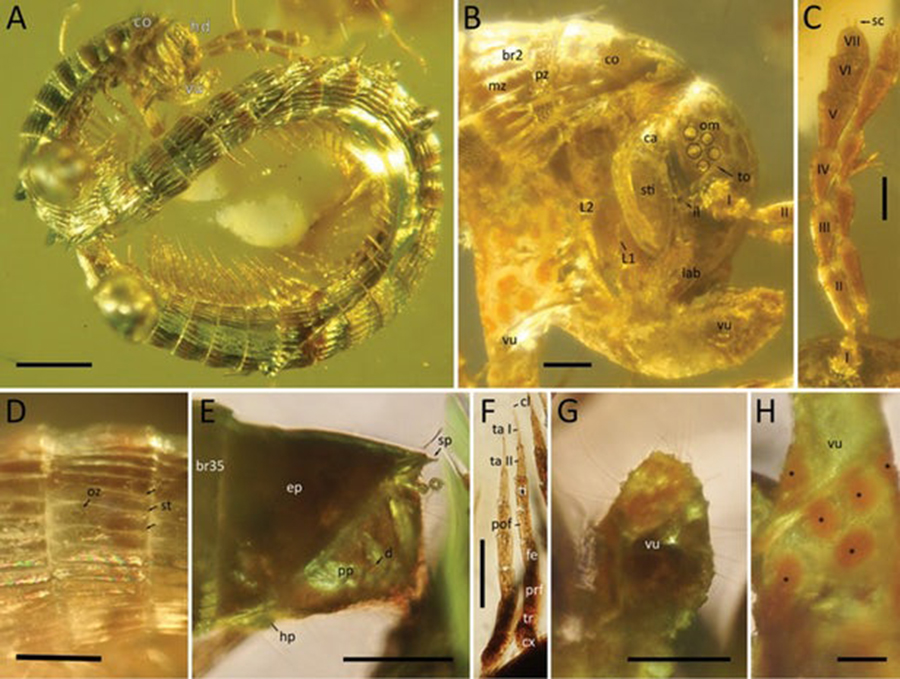 Picking up where the Jurassic period left off, the Cretaceous is best known as the last hoorah for the dinosaurs. As far as insects are concerned, it gave us ants, termites, aphids and the explosion of pollinators that coincided with the development of flowering plants. But, ironically, the prehistoric-looking millipedes of the order Callipodida, are thought to have come later. Until now.

Scientist now have to rearrange what they know – or thought they knew – about the evolution of millipedes due to a tiny, 8.2-mm member of the order Callipodida who got its many feet stuck in some tree resin, which turned up in Myanmar 99 million years later as a golden lump of amber.

This places this tiny critter well into the Cretaceous period, making it the oldest millipede of its order yet discovered. In fact, it's morphology – which included compound eyes composed of five ommatidia while most Callipodidan eyes have at least 30 – was so unique it warranted its own suborder as it didn't quite fit within the current classifications for the species.

"It came as a great surprise to us that this animal cannot be placed in the current millipede classification," says Professor Stoev.

"The entire Mesozoic Era – a span of 185 million years – has until now only been sampled for a dozen species of millipedes, but new findings from Burmese amber are rapidly changing the picture," says Dr. Greg Edgecombe, a leader in the study of fossil arthropods from the Natural History Museum who wasn't involved in the research. "In the past few years, nearly all of the 16 living orders of millipedes have been identified in this 99-million-year-old amber. The beautiful anatomical data presented by Stoev et al. show that Callipodida now join the club."

3D X-ray microscopy was used to get a better look at the find, including its internal structure. This was made possible due to its amber tomb that helped it retain fine details not usually preserved in fossils. This particular piece of amber that trapped Burmanopetalum inexpectatum is part of a private collection – the largest of its kind in Europe – belonging to Patrick Müller, which comprises 400 amber stones, all of which have been made available to the scientists.

Millipedes belong to the class Diplopoda, Latin for "double foot." The name refers to the two pairs of legs on on each body segments, in contrast to centipedes (class Chilopoda) which have just one pair per segment.

The study describing Burmanopetalum inexpectatum is published in the open access journal ZooKeys.