By analyzing a tooth from the first fossil remains of the extinct Pan-American sloth (Eremotherium laurillardi) found in Belize, a team of paleontologists has uncovered insights into the creature’s dietary adaptations, as informed by local climate.

The Pan-American sloth had a distribution from southern Brazil to the Gulf and Atlantic coast regions of North America.

This animal could reach a length of 20 feet (6 m), which, in an upright position, would have permitted it to feed at higher levels in trees.

In 2014, divers found the fossil remains of a 27,000-year-old Pan-American sloth — parts of a tooth, humerus and femur — while searching for ancient Maya artifacts in a water-filled sinkhole in Cara Blanca, Belize.

Though partially fossilized, the tooth still held enough unaltered tissue for stable carbon and oxygen isotope analysis, which provided clues to what the sloth ate in the last year of its life. This, in turn, revealed much about the local climate and environment of the region at the time.

“Our findings add to the evidence that many factors, in addition to a changing climate, contributed to the extinction of megafauna in the Americas,” said co-lead author Professor Lisa Lucero, from the Department of Anthropology at the University of Illinois at Urbana-Champaign.

“The teeth of giant sloths like the one found in Belize, Eremotherium laurillardi, differ from those of other large mammals, like mammoths, that went extinct between 14,000 and 10,000 years ago,” said first author Jean Larmon, a graduate student at the University of Illinois at Urbana-Champaign.

“Giant sloth teeth have no enamel, the hard, outer layer of human and some animal teeth that can be analyzed to learn about their diet.” 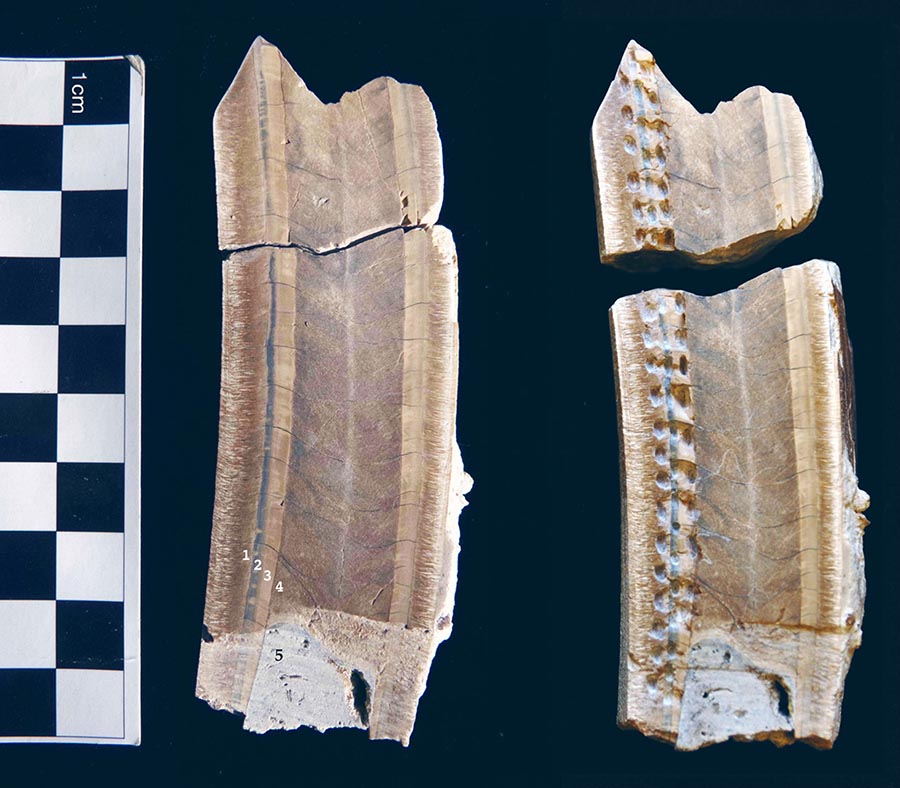 By using cathodoluminescence microscopy, a technique that causes minerals to glow and can detect the extent of mineralization in fossils, the researchers discovered that one type of tooth tissue, the dense orthodentin, was largely intact.

They drilled 20 samples of orthodentin for isotopic analysis along the 3.9-inch (10 cm) long tooth fragment, spanning more than a year of tooth growth.

“This allowed us to trace monthly and seasonal changes in the sloth’s diet and climate for the first time, and also to select the best part of the tooth for reliable radiocarbon dating,” said Professor Stanley Ambrose, also from the Department of Anthropology at the University of Illinois at Urbana-Champaign.

The isotopic analysis revealed that the giant sloth lived through a long dry season, which lasted about seven months, sandwiched between two short rainy seasons.

It also revealed that the creature lived in a savanna, rather than a forest, and consumed a variety of plants that differed between wet and dry seasons.

“We were able to see that this huge, social creature was able to adapt rather readily to the dry climate, shifting its subsistence to relying upon what was more available or palatable,” Larmon said.

“This supports the idea that the sloths had a diverse diet. That helps explain why they were so widespread and why they lasted so long. It’s likely because they were highly adaptable,” Professor Lucero said.

The findings were published in the journal Science Advances.