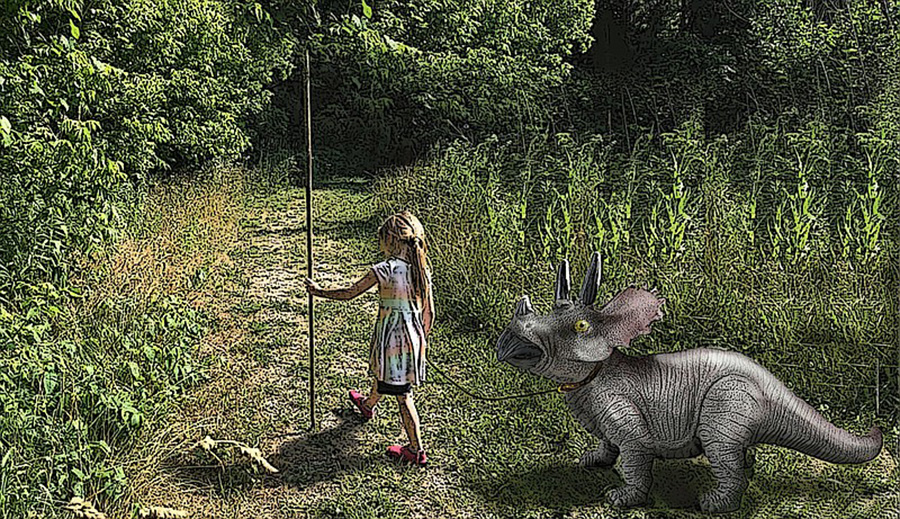 Every time Cheri Johnson dropped off her son, Evan, at daycare, he would throw a tantrum because he didn't want her to go. Certainly, she thought, the 20-month-old would not scream all day. So one morning she spied on Evan from behind the day care's glass door. As he was hollering and kicking his feet, she watched the other children try to console him.

"They went to the bookcase and brought him dinosaurs," said Johnson, a senior analyst at the Chicago Transit Authority. "He played with the dinosaurs and he stopped crying. That's how I found out he was into dinosaurs. I never knew."

From then on, all Evan wanted was dinosaurs. He got dinosaur sheets, dinosaur pillows, a dinosaur comforter, dinosaur wallpaper and plenty of dinosaur toys and videos. When he struggled learning his ABCs, Johnson pasted pages from a dinosaur alphabet book onto his wall.

"He knew Ankylosaurus, Brontosaurus, Compsognathus, Diplodocus," Johnson said. "I put that up there and he knew his ABCs. Anything with dinosaurs, he could get."

Evan was usually a quiet kid who stammered his words. But he transformed whenever they visited the Field Museum in Chicago.

"When he went to the museum and he saw the dinosaurs, he didn't stutter. Not at all," Johnson said. "He would talk about those dinosaurs, and I'd be amazed."

Now, several years and a few "Jurassic Park" movies later, Evan Johnson-Ransom is a vertebrate paleontologist completing his master's degree at Oklahoma State University Center for Health Sciences. He studies the evolution of feeding behavior in tyrannosaurs, the carnivores that include Tyrannosaurus rex, Albertosaurus and Gorgosaurus. Evan, who plans to pursue a Ph.D., said he owes his career path to the early encouragement by his mother and grandmother.

A lot of kids fall in love with dinosaurs. But for many, the romance goes extinct somewhere in adolescence. If you have a dinosaur-obsessed child at home, Johnson-Ransom suggests, now is the time to nurture that curiosity.

Even if they don't grow up to become trained paleontologists, children's fascination with dinosaurs could foster a lifelong appreciation for science.

We asked several expert dino-devotees for advice on how to best play with dinosaurs and encourage that appreciation.

The simplest way is take kids on virtual field trips to museums' fossil collections, like at the Smithsonian or at the Natural History Museum of Los Angeles County. While you're online, take a moment to share some fun dinosaur facts.

For instance, Johnson-Ransom is fond of telling kids that T. rex did not roar.

"They didn't have a larynx or a voice box like mammals do," he said. Instead, they probably made a guttural sound like a bird, which Johnson-Ransom demonstrates by sucking in his gut, puffing up his chest and letting out a deep pigeon-like coo.

"Think of a giant angry duck," he said.

Ashley Hall, a paleontologist and author of "Fossils for Kids: A Junior Scientist's Guide to Dinosaur Bones, Ancient Animals and Prehistoric Life on Earth," has her own favorite piece of dinosaur trivia: "You are closer in time to T. rex than T. rex was to Stegosaurus." The hulking herbivore lived some 150 million years ago while T. rex roamed the Earth around 66 million years ago. The time comparison gets kids thinking about how long dinosaurs ruled the world.

Hall was obsessed with dinosaur toys when she was a child. Her favorite was a pink Parasaurolophus, which is a duck-billed dinosaur with a long curving head crest. Years later, as an adult, Hall went on a fossil dig with a team from the Raymond M. Alf Museum of Paleontology and helped excavate the only known baby Parasaurolophus, which they affectionately named baby "Joe."

"Keep your kids interested in dinosaurs," said Hall, who has a tattoo of a Parasaurolophus skull on her arm. "Paleontology is the gateway to science."

Amy Atwater, a paleontologist at the Museum of the Rockies in Montana, suggests answering your child's dinosaur questions with more questions of your own. That gets them thinking and helps them develop hypotheses and ways of testing their hunches. "Essentially, you're priming them for the scientific method, which is great for their future."

Atwater loves to share fun facts, like how the T. rex had a mouth full of ferocious teeth and, if it lost a tooth, one would grow back. On her museum tours, she shows children examples of fossilized T. rex teeth.

"They are blown away that one single tooth could be bigger than a banana," said Atwater, who often calls them "murder bananas" with the older kids.

Another fun fact is that some T. rex teeth were longer than the predator's ulna, or forearm bone. "Could you imagine your teeth being bigger than your arm?" Atwater asked.

You can also use T. rex research to introduce kids to scientific debate. Some paleontologists think the giant killing machine was covered in fluffy feathers; others argue it was mostly scaly. There's another argument over whether T. rex had lips that hid its teeth, like a monitor lizard, or lacked them and had its teeth exposed, like a crocodile.

Another activity for dino-obsessed kids is to create "fossilized footprints," said Victoria Arbour, Ph.D., a paleontologist at the Royal BC Museum in Canada. Just grab some Play-Doh, flatten it into a disk, and have your child walk one of her dinosaur toys across it. "If you let that dry out on your counter, it's basically a fossil of your toy dinosaur's footprints," Arbour said.

You could ask your children what sort of information they think paleontologists can infer from dinosaur tracks, such as whether a dinosaur was big or small, walked on two or four legs and traveled alone or with a herd.

But as any parent knows, footprints and feathers aren't why most kids love dinosaurs. They love them for the destruction. Dinosaurs slice each other with sinister claws, gore each other with pointed horns and clobber each other with clubbed tails. So if you're bored on a rainy day, why not stage a Mesozoic melee? Take the toys and make them attack one another.

As the carnage breaks out, ask your child why they think one dinosaur would win over another.

"That's a big part of what we do as paleontologists," Arbour said. "We have to think about why something might be the way it is and then figure out how to justify and test that."

Another game paleontologists recommend playing with your kids is called "Not a Dinosaur." That's because lurking in almost every toy dinosaur collection are several dinosaur imposters.

"Kids love feeling like they're smarter than adults," said Phoebe Cohen, Ph.D., a paleontologist at Williams College. They love that secret knowledge that lets them say "well, actually." So, she said, "go through all of their dinosaur toys and sort of talk to your kids about which ones are actually dinosaurs and which ones aren't."

The main culprits are marine reptiles like mosasaurs, plesiosaurs, ichthyosaurs; flying reptiles like pterodactyls; and the sail-backed dimetrodon, which is actually more closely related to humans than dinosaurs.

Cohen suggests using dinosaurs as a way to introduce kids to the idea of extinction. "It's not scary to 3-year-olds to talk about a giant rock falling from the sky," she said. It's particularly pertinent as more and more plants and animals become extinct across the world. "For this generation it's something they are going to have to deal with and be faced with, so introducing that concept to them now is a good thing." 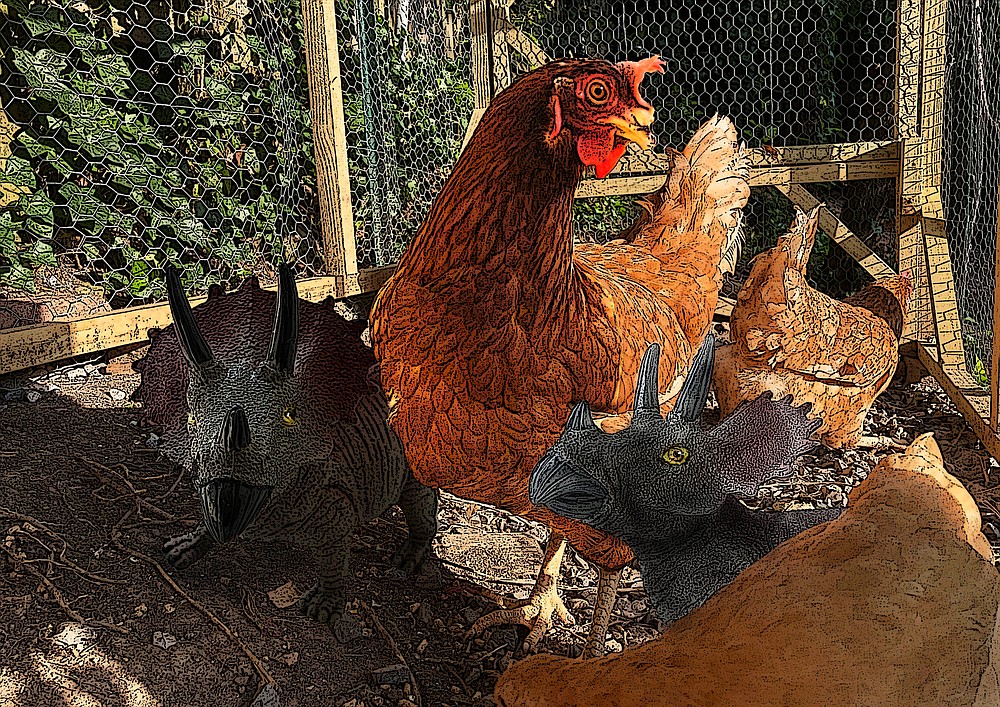 Finally, the coolest fact you can share with your kids is that dinosaurs still live among us.

"Birds are dinosaurs," Cohen said. They are descendants of the same group that claims the T. rex and Velociraptor. If your kids aren't convinced, simply look at the scaly feet of a chicken.

So if you really want to blow their minds, Cohen suggests going bird-watching through your neighborhood. "That flock of pigeons on the corner are actually dinosaurs."