If you were a person who liked fun in the ’90s, you definitely saw Jurassic Park. And if you were a person who freaking loves dinosaurs, like myself, you probably saw Jurassic Park three more times in the theaters. Needless to say, Steven Spielberg’s dino opus left a pretty significant mark on most of us, which is why Jurassic World was such an exciting prospect. It’s a semi-reboot of a series that really changed course once sequels were introduced, and it’s one giant reference to the original film.

Naturally, the plot is the biggest reference, as the movie replaces Laura Dern and Sam Neill with Bryce Dallas Howard and Chris Pratt and swaps young siblings visiting a relative on the island for a teenage kid and his little brother. Rather than a soft launch, we’re witnessing a dinosaur park in full swing, giving us the Jurassic “What If?” of our dreams. There’s also one big, bad dinosaur loose in the park, and everyone’s running while Pratt and Howard try to save the day together. As a fan of the original, I was actually pretty appreciative of the parallel stories. But of course, with that overarching homage came some smaller details — some meant for all to catch, and others hidden very, very carefully.

Unfortunately, he didn’t stop by to say that “Life finds a way,” he was just chilling on a book cover: his own book cover, on Jake Johnson’s desk in the control room. God Creates Dinosaurs is a must read, if I could just get someone to actually publish it IRL. 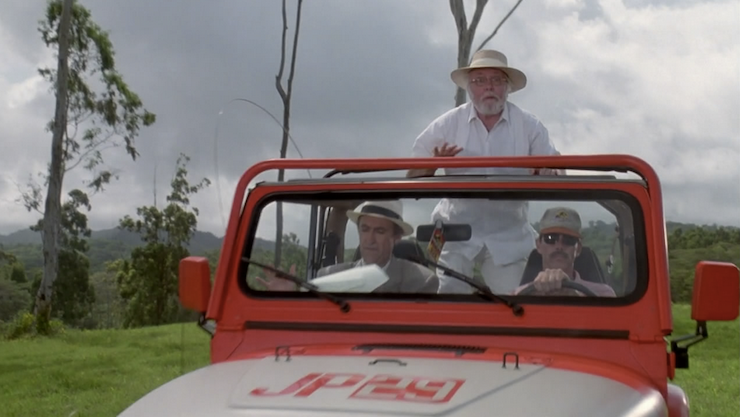 When Zach and Grey get into an old Jeep at the site of the park’s now defunct visitor’s center, they hop into Jeep 29, which, is the jeep that John Hammond rode in with his soul sucking lawyer in Jurassic Park.

Remember this guy? He makes an appearance in the Jurassic World science center at the start of the blockbuster. 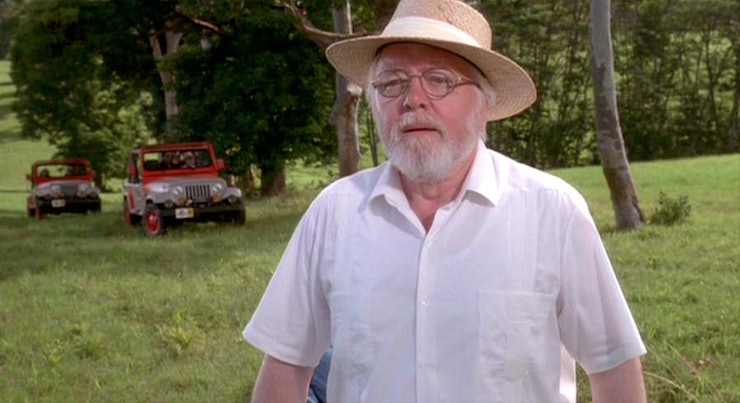 The new owner of Isla Nublar, Simon Masrani, quotes John Hammond (the old guy from the first movie) to his park-runner, Claire. Hammond was notorious for annoying his tour group with that line in the original Jurassic Park. 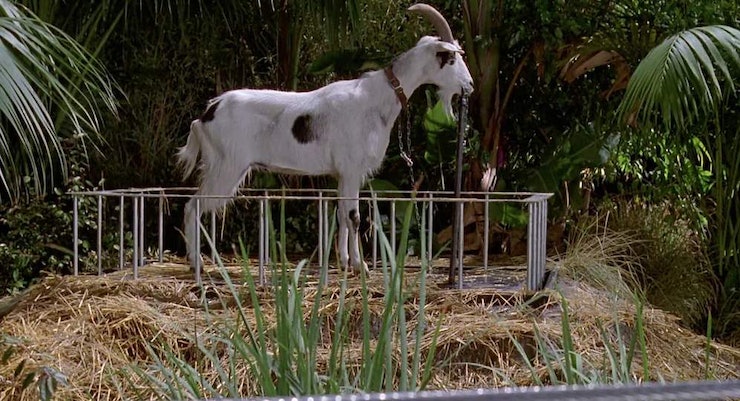 During a shot of one of the Jurassic World tours, we see another goat on a chain, just like we did on the first tour in the original movie. And yeah, a dino’s gonna eat the goat.

Bonus: The park people drop a flare next to the goat, calling back to the flares that Sam Neill used to distract the T.Rex when he was after the kids in JP. 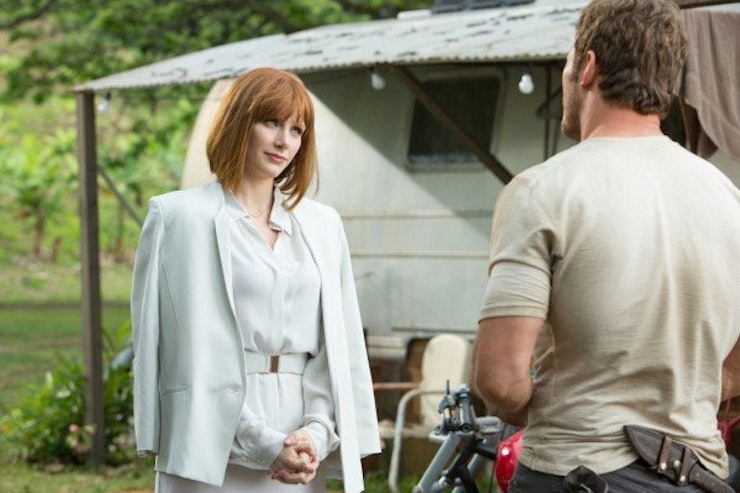 She’s the one underestimating the capacity of her park’s dinosaurs, so why wouldn’t she be dressed in a power suit inspired by John Hammond’s island get-up? 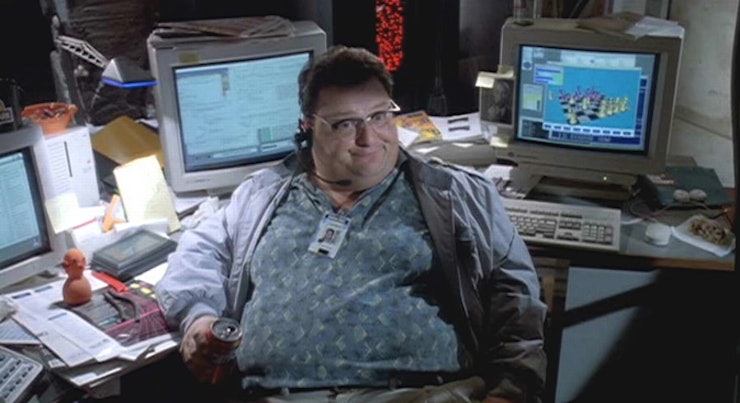 Claire comes in and tells him to clean up his space, which is full of junk. He’s got those black rim glasses. He’s like the non-evil timeline version of Wayne Knight’s villain from the original film. 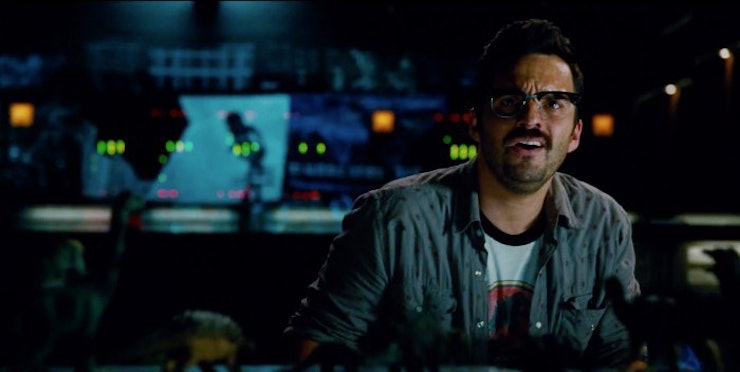 He knows it’s probably disrespectful since like, a lot of people died there and all, but he paid a lot of money for it on eBay, OK?

10. Always Hiding Under And Around Cars 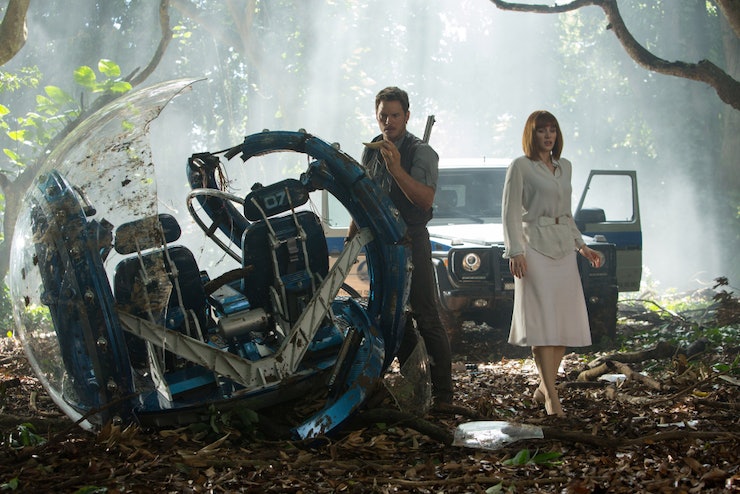 Seriously, these people can’t find better objects to hide around? That iconic scene from Jurassic Park, in which the kids fail to hide in the car after it flips and spins and falls down a cliff, should have taught these people something, right?

11. The Flock Of Running, Wispy Dinosaurs 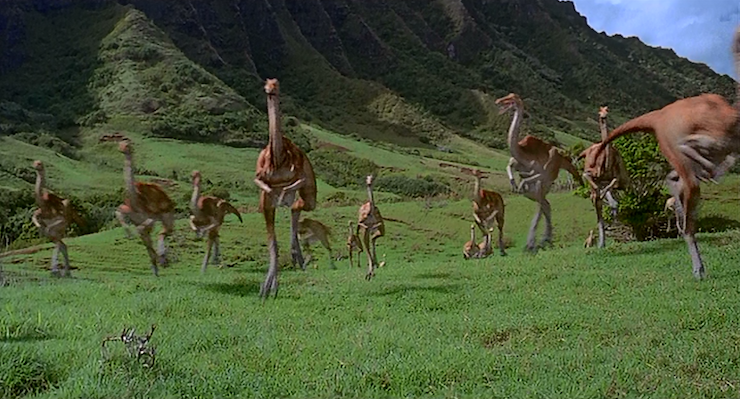 When Grey and his brother are going around the park, we see that you can take a safari through a field of prancing dinosaurs in a flock, only unlike when the Jurassic Park characters did that, those dinosaurs aren’t being chased by a giant T.Rex. It’s a Disney-fied version of that original scene.

12. The Vibrating Phone Is The New Flashlight In The Car

When Grey and Zach are in their tour vehicle, the attempt to hide from the Indominous Rex. Unfortunately, Zach’s cell phone starts buzzing and because they’re upside down he can’t reach it. Boom, the dino’s hovering at their door. Kinda like when the kids accidentally shined a flashlight at T.Rex and he did the same thing, no?

Owen and Claire get out of their jeep to check out an ailing Brontosaurus, and share a moment while they care for the dying animal. This of course turns much darker when they realize that I.Rex killed all of the Brontosauruses for sport, but it certainly echoed the scene when Laura Dern and Sam Neill comforted a sick Triceratops.

14. The Spot Where The Raptors First Appeared

Grey runs his hand over a painting of a velociraptor at the old visitors center. That spot once saw a raptor’s shadow move out from behind that drawing, setting off the famous raptor kitchen chase.

These also got the kids in trouble in the tour jeep next to the T.Rex cage in the original. Grey finds them and turns them on when going through the old visitor’s center.

The one that fell when the T.Rex was being attacked by raptors as our heroes escaped in the original is not only picked up by one of the boys in Jurassic World, but the camera gives its remnants special attention after the Indominous Rex chases Claire and Owen through the building.

The boys cross it on the way to the visitors center. It doesn’t appear to be electric anymore.

18. The Old Research Sign From The Infamous Dilophosaurus Scene 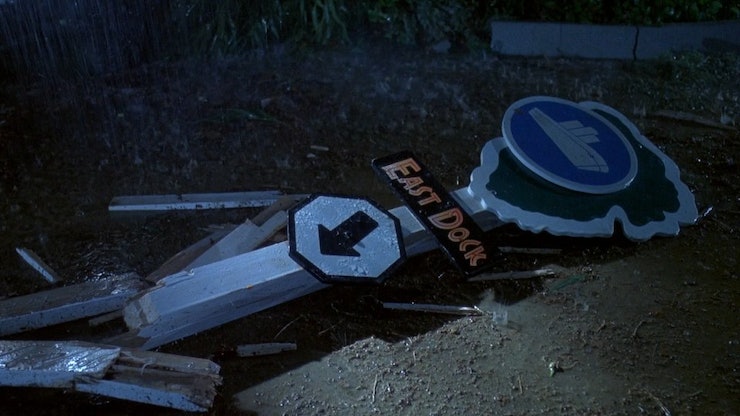 Remember when Wayne Knight tried to spin the sign back to its rightful place? Well, that never worked, but the sign is still on the park campus.

19. The Hammond Statue in The Research Lab 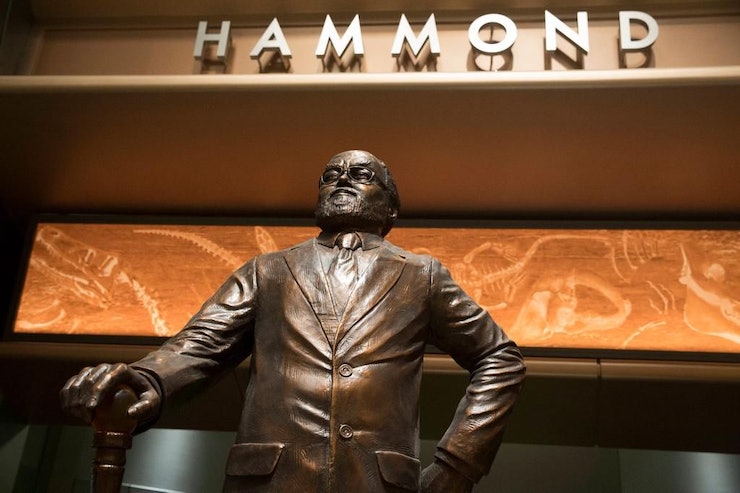 Pretty sure they just pulled footage from the original movie to create this hologram, which Claire uses to scare a velociraptor that takes down Vincent D’Onofrio and then comes after her and the boys. 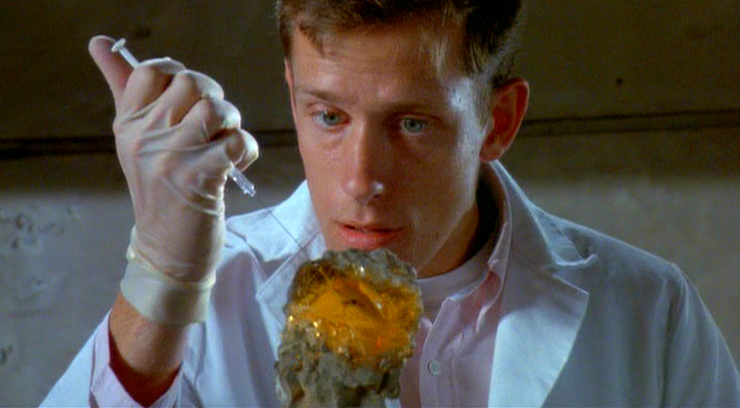 They seem to be part of the design of Jurassic World, and they call back to the place from whence dino DNA originally came: Ancient mosquitoes trapped in amber. 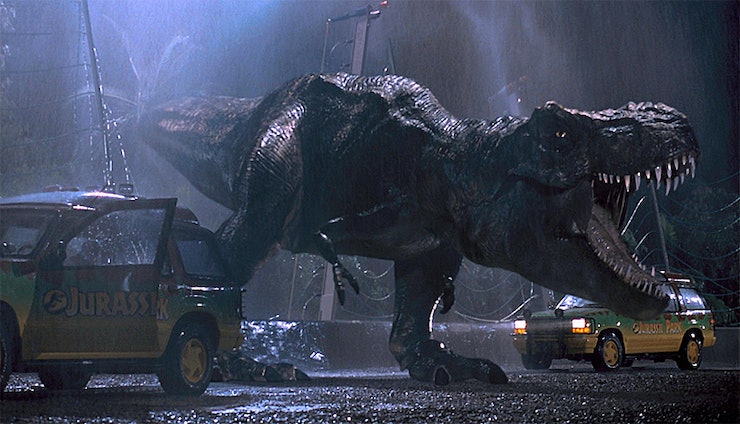 Not only does the original T.Rex come back, but he teams up with the raptors to defeat Indominus Rex, down to the part where the raptors jump all over the new dino the way they did the T.Rex in the first movie.

So yeah, you could say this movie was a Jurassic Park fan’s dream come true.