The 10 Best Dinosaur Museums in the World, Ranked | Paleontology World

Dinosaurs are some of the most fascinating and mysterious creatures ever to walk the  Earth, simply because no-one ever has ever witnessed one with their own eyes. The closest we can come in this day and age is finding a well-preserved fossil buried deep beneath the ground or a dinosaur skeleton in a museum.

However, there are so many museums in the world that it might be tough to narrow down which ones are worth your time and money. If you're curious to discover dinosaurs and learn more about their ecosystems, then consider checking out the ten museums below that will cater to the paleontologist in you!

Established in 1993, the National Dinosaur Museum is located in Gold Creek Village near Canberra, and serves around 100,000 visitors each year. The museum hosts guided tours of their many exhibits, and holds a large amount of rare fossils, animatronic dinosaurs, skulls, skeletons, and murals.

The museum also has an outdoor Dinosaur Garden featuring Stan, a 65 foot tall dino who guards the entrance!

The Smithsonian family of museums is famous for its wide and vast collection of materials, and that includes its range of fossils and dinosaur-related exhibits! The new Fossil Hall at the Smithsonian opened June 9 of this year, and includes a 31,000 foot exhibit dedicated to exploring life on earth from 4.6 billion years ago to the future.

The exhibit, entitled Deep Time, boasts around 700 fossil specimens, including that of a Tyrannosaurus Rex, a Diplodocus, and a mammoth. The workers at the Smithsonian, in renovating the exhibit, wanted to better incorporate how science has evolved in the past century, and hope that many will enjoy the new spin on the Hall of Fossils!

Formerly known as Dakota Dinosaur Museum, the Badlands Dinosaur Museum opened in 1993 and is currently overhauling its exhibits and dinosaur-related offerings. Badlands focuses primarily on exhibits of fossils, fieldwork and research programs, and public laboratory preparations for new specimen additions to its collection.

Though they are adding more exhibits in the future, you can currently view a variety of Tyrannosaurus, Triceratops, Edmontosaurus, and more ice-age mammals. They also accept volunteers for their fieldwork crew in the Summer, so you can be involved if you're interested in digging for dinosaurs!

One of the leading Asian dinosaur museums, Fukui was finished in the summer of 2000. Its location was chosen due to the large amount of dinosaurs that had been discovered in the region, and the museum sits only 3.41 miles from the dinosaur excavation site.

The museum is divided into five zones, which each house their own unique exhibitions of materials. There are over 40 skeletons of dinosaurs available for viewing, alongside moving robotic dinosaurs.

Located near Lake Michigan, the Field Museum opened its doors in 1894 with exhibits that had debuted at the World's Columbian Exposition one year earlier. Over 65,000 artifacts found a home at the newly established museum, named for Marshall Field, the man who donated the $1 million needed to start the project.

The museum opened its current building in 1921, and has been educating and entertaining visitors ever since. The Field Museum is an important place because it houses Sue the Tyrannosaurus Rex, the most complete skeleton of the creature to date. The museum attempts to display the "real" fossils whenever possible, but also includes casts of some of the creatures using accurate molds of fossils.

The Natural History Museum is home to many exhibitions, but it includes some of the oldest dinosaur specimens known to science. The museum boasts a portion of the first Tyrannosaurus Rex and Iguanodon skeletons ever found, and also has some other important dinosaur fossils within its collection.

Some of the paleontologists from the museum have joined a dinosaur dig taking place in Wyoming, and have already unearthed some specimens! 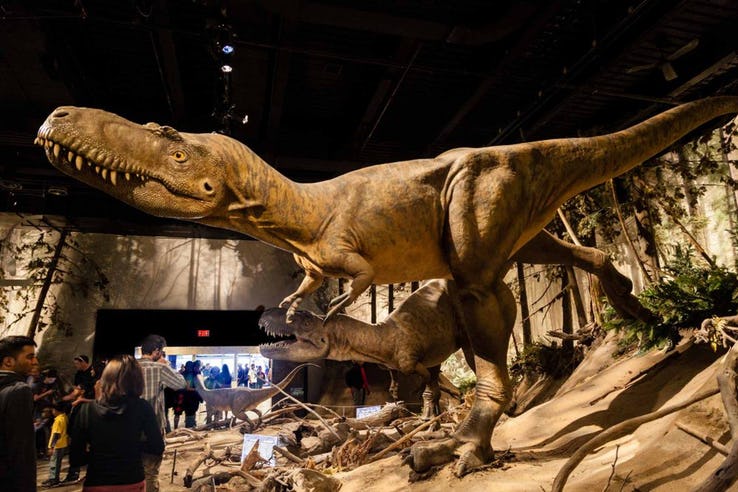 The premier museum for dinosaurs in Canada, Royal Tyrrell is open seven days a week in order for visitors to experience their amazing collection of specimens. Standouts of their collection include the skeleton of a new armored dinosaur, Borealopelta markmitchelli, which was discovered in 2011 and was the oldest dinosaur found in Alberta to date.

Their rotating exhibit Fossils in Focus also features an astonishing exploded skull of  Daspletosaurus, which were gathered and reproduced (if  delicate) over 10 years until the specimen was complete .

Founded in 1846, the Royal Belgian Institute of Natural Science has the largest Dinosaur Gallery in Europe, devoted to displaying dinosaur fossils and information about them. In 1878, there were 38 nearly complete Iguanodon skeletons found in a coal mine in Belgium, of which the museum acquired 30, which continue to be the centerpiece of the establishment to this day.

Other highlights include Ben the Plateosaurus and a replica Tyrannosaurus named Stan. They also have preserved fossils of feathered dinosaurs available for viewing as well.

The Natural History Museum has 14 sites around France, with 4 situated in Paris. The museum is the third-largest collection of specimens in the world, with about 62 million in reserve.

There are many dinosaurs and prehistoric mammals to be found at the Natural History Museum, and the vast array of animals represented will be sure to satisfy the most curious paleontologist-in-training!

Opened in 1987, Zigong Dinosaur Museum is unique from many of the other destinations on this list, as it is situated upon a site where dinosaur fossils were found. The temperate climate in Zigong has made it a gold mine for dinosaur-related discoveries!

Spread out over three floors, the museum spans around 710,000 square feet and contains a number of exhibits devoted to the Jurassic period, which occurred around 205 million to 135 million years ago. There were 100-plus specimens discovered at the Zigong site alone, and thirty of them were complete (or nearly complete) skeletons!

Paleontologists in Mongolia have discovered...

There are many other types of fossils....

Jurassic Mark: This Japan Hotel is Manned by Robot Dinosaurs

The reception at the Henn na Hotel east of...

Steven Spielberg looks back on why he was "...

Private Dinosaur Collectors Price Museums Out Of The Market

The cost of these scientific relics are...

It hardly seemed fair that so many...