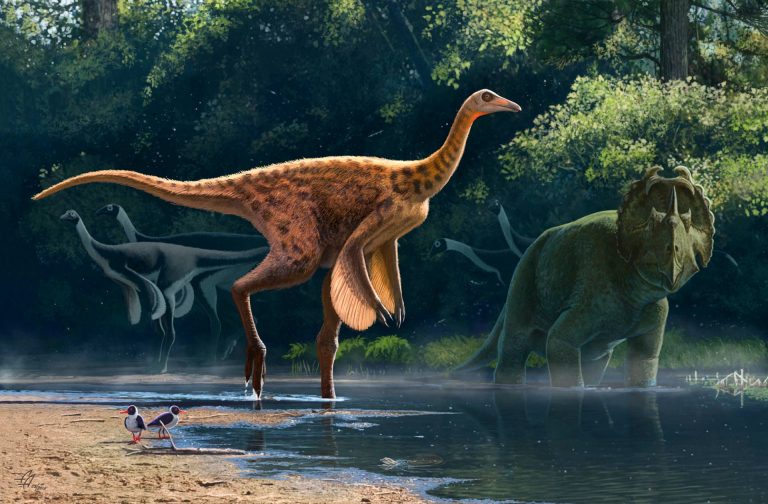 Dr. Michael Ryan of The Cleveland Museum of Natural History was part of an international group of researchers that announced the discovery of a new ostrich-mimic dinosaur, Rativates evadens, from the lower Dinosaur Park Formation near Dinosaur Provincial Park, Alberta. The new species lived about 76 million years ago during the Late Cretaceous Period. Research describing the new species is now published online in the Journal of Vertebrate Paleontology.

Based on a partial skeleton collected by the Royal Ontario Museum in 1934 from badlands adjacent to what is now Dinosaur Provincial Park, Rativates (RAT-iv-ATE-eez) would have resembled a modern ostrich, but with long, fingered arms instead of wings, and a long tail. It would have been approximately 3.3 meters (11 feet) long, about 1.5 meters (5 feet) tall and weighed about 90 kilograms (200 pounds).

“Rativates was previously identified as another specimen of the more common ostrich-mimic dinosaur Struthiomimus altus, but lacks the key diagnostic characters of that species,” said lead author Bradley McFeeters, a Ph.D. student in the Department of Earth Sciences at Carleton University in Ottawa, Canada. “We can tell that it is a new species based on features of its skull, tail, pelvis and feet, including the shape of the long bones of the feet.”

Rativates (Latin ratis + vates) means “ratite (large flightless bird) foreteller” and alludes to the paradox of an ostrich-mimic dinosaur existing before ostriches. The name evadens means to evade, in reference to this swift-footed dinosaur’s ability to evade predators in the Late Cretaceous, as well as its recognition as a new species 80 years following the discovery of the original fossil.

“The referral of fossils to the named species of ostrich-mimic dinosaurs like Struthiomimus is complicated because many specimens are incomplete. The recognition of Rativates helps clear up these problems, and at the same time strengthens a connection between Canadian ornithomimids and their Asian cousins,” said co-author Dr. Michael Ryan, curator of vertebrate paleontology at The Cleveland Museum of Natural History, who was co-supervisor to the lead author.

Although it is a member of the carnivorous dinosaurs (Theropoda), ornithomimids such as Rativates lacked teeth and, similar to birds, had beaked mouths. They are believed to have been omnivorous, meaning they ate plants, insects and other small animals. Their long, powerful legs would have made them fast runners (like the Gallimimus in the original Jurassic Park movie), whether they were hunting prey or escaping from larger predators, like Gorgosaurus.

Although no skin impressions were found with the fossil, the closely related ornithomimid, Ornithomimus, also from Alberta, is known to have had a downy covering over most of its body. It may have had true feathers as well.

“We histologically thin-sectioned the femur of Rativates to analyze its growth and determined it was at least eight years old and nearly adult-sized at the time of death. This is only 80 percent as long, and half as massive as, the adult size of the closely related species Struthiomimus altus, that is estimated to have weighed approximately 175 kilograms (~385 pounds)”, said co-author Thomas Cullen, a Ph.D. candidate at the University of Toronto.

“This suggests that there are at least two differently-sized, but closely-related dinosaur species that lived together on the ancient landscape, similar to what we see today in the closely related predators like foxes, coyotes and wolves,” said McFeeters’ former co-supervisor and co-author Claudia Schröder-Adams, of the Department of Earth Sciences at Carleton University.

“Rativates is another exciting example of a new species of dinosaur being discovered among museum collections,” said Ryan. “These valuable collections allow modern researchers to build on the work of earlier scientists to advance what we know about the ancient Earth and provide new insights into evolution.”

Images and video available at www.cmnh.org/rativates

The next entry in the Jurassic...

Laura Dern Teases Jurassic World 3: “Being Back with Sam Neill and Jeff Goldblum Sounds Like a Dream”

Laura Dern's had an amazing year. Not only...

A site containing the 220-million-year-old...